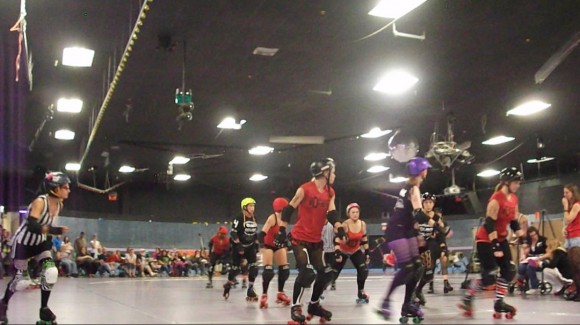 “I hope to see some ass kicking,” Jessica Marino said in anticipation of the roller derby bout minutes from starting. Marino got her wish in what was a particularly physical match on Saturday between the Bradentucky Bombers and the Suncoast Quad Squad, formerly the Sarasota Roller Girls.

The Ted Stevens Band played Rockabilly to greet the crowd of about 200 as they arrived at the Stardust Skate Center. Many were friends and family of skaters, but many more were just fans of roller derby. “We started watching this stuff back in the ‘70s,” a man in the crowd, Bob Schettler, mentioned. He went on to explain that back then the game was a lot more violent, but now they have more rules to protect the players.

Even so, physicality is still an important part of the game. One woman whose family member was skating expressed apprehension about that factor. “They train frequently, but anything could happen,” she said.

“They’re going into battle with each other,” Theron “Thor” Robinson, the coach of the Bradentucky Bombers, said. “We’ve had injuries on the track where people have had 16 screws in their foot. We had one girl break two leg bones this year. These girls realize they could be injured in ways that change the rest of their life.”

But the sport involves much more strategy than girls ramming into each other on roller skaters. In fact, the sport is unique in that skaters play both offense and defense at the same time.  As the Women’s Flat Track Derby Association (WFTDA) explains of the rules, a bout or game consists of two thirty-minute periods played between two teams. These periods are broken down into jams that can last two minutes. Before the start of the jam, three blockers from each team line up behind the pivot, a special type of blocker, and ahead of each team’s jammer. The jammer’s role is to score points for her team by passing opposing players in the pack of blockers. The first jammer to break ahead of the pack legally and in bounds becomes the lead jammer, and can call off the jam at any point.

After a slow start for the Bombers, Brianna “Sleezy Breezy” Donnelly scored 25 points in one jam right before the end of the first period.

“I had a power jam, they had blockers in the [penalty] box; it was more like doing laps than anything else,” she said after the game.

The Bradentucky Bombers ended up winning the bout by a score of 144-117.

Those who skated on Saturday had varied backgrounds that included teachers, students, a lawyer, and a make-up artist among others. There was even an accountant whose skater name was Sarbanes Foxey, alluding to the landmark accounting legislation, the Sarbanes-Oxley Act. Foxey described the team as “a group of strong women who do a lot for the community.”

Others frequently mentioned the word “sisterhood” to characterize the atmosphere of the team.

“Sisters fight – you yell at each other, you don’t talk to each other for a day, but all in all you come together as one to play this game that all of us love,” Jacqueline “Blaque Jac” Thermitus  said. “It’s rewarding for both sides.”

“Because we have practice two or three times a week, we’re together a lot and it’s very supportive,” second-year New College student Malorie “Phylla-Bust-Her” Sneed said.

Sneed helped to explain the nature of the skater names. “People gravitate towards names that are funny, or have a violent element, or something sexy … something that will give someone the feeling of being able to go out there and kick some ass,” she said.

She went on to say how she felt roller derby is a sport in a league of its own.

“It speaks to the appeal and inclusivity of the sport that I, as someone who has never played a team sport before in my life, and who chose New College because it focuses more on academics than sports, I think it’s funny that I’m playing this sport now,” she said. “It’s not your average team sport.”