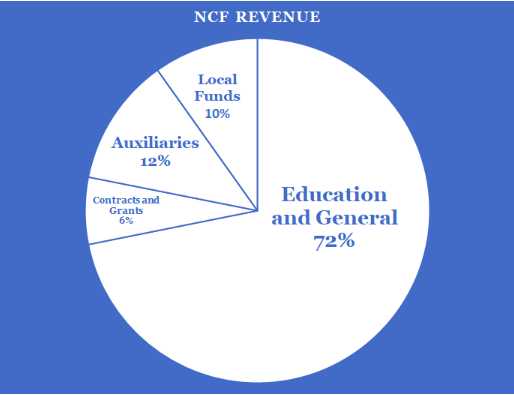 What keeps the lights in the Hamilton Center on? What keeps the overpass tastefully overgrown? What keeps New College a college, as opposed to a habitat for the wild dogs of the Sarasota-Bradenton border? The answer to all of these questions is simple: money. The college’s finances may seem like fiscal sorcery from the outside, hidden and mystic to those without offices in Cook Hall, but any student who wants to understand the operations of the college will find them critical.

On Sept. 14, Vice President of Finance and Administration John Martin and Associate Vice President of Finance Kimberly Bendickson presented the college’s 2019-2020 budget to the Board of Trustees. That budget called for the expenditure of $56,891,682. Like all other state colleges and universities in Florida, the budget was split up into four categories: Education and General, Contracts and Grants, Auxiliaries and Local Funds.

Education and General makes up the bulk of the budget at just over $41 million. That money goes to salaries, scholarships, library resources and other operating expenses. This is what the tuition of students helps to pay for, though tuition only brings in only $4 million. Most of the money in this section of the budget comes from the state of Florida, which allocates over $35 million. The college is also a lottery winner, receiving $1 million from the Florida lottery. Funding for the academic divisions comes from here, with Humanities getting $3.9 million, Natural Sciences getting $3.3 million and Social Sciences getting $3 million in the current draft budget.

Auxiliaries is the budget entity dealing with ancillary organizations like campus housing, Metz, parking and the bookstore. The $6.8 million it brings in are from miscellaneous receipts and fees. This money goes to salaries, maintenance expenses and operating capital overlay.

Local Funds are the broadest category and breaks down into seven other subcategories. The Student Activities category is the money collected primarily from the Activities and Service Fee assessed on students, totaling $319,617, which funds the New College Student Alliance (NCSA). Lower enrollment this year makes this funding is smaller than before, which has led to the NCSA taking certain budget measures, such as allowing the Foundation-run Student Research and Travel Grant program (SRTG) to handle all student research and travel funding. Student Financial Aid is received from myriad sources like Pell Grants and bank loans, totals over $5 million and is used to fund financial aid and scholarships. The Technology Fee, Concessions, Self-Insurance and Board-Approved Fees are also under the ‘Local Funds’ umbrella, totaling less than $150 thousand of the budget.

Which money is fungible and which is not is a key aspect of the budget. Moving money between allocations is a delicate undertaking and sloppiness on the college’s part could lead to serious trouble.

“[The University of Central Florida] used a lot of their cash reserves, $100 million, to do things weren’t permissible with those dollars,” Martin said. “They were for good purposes, but they used the wrong kind of funds.”

“We’re going to try and be true to what we’re charging here,” Martin said. “That’s how we want to spend the dollars.”