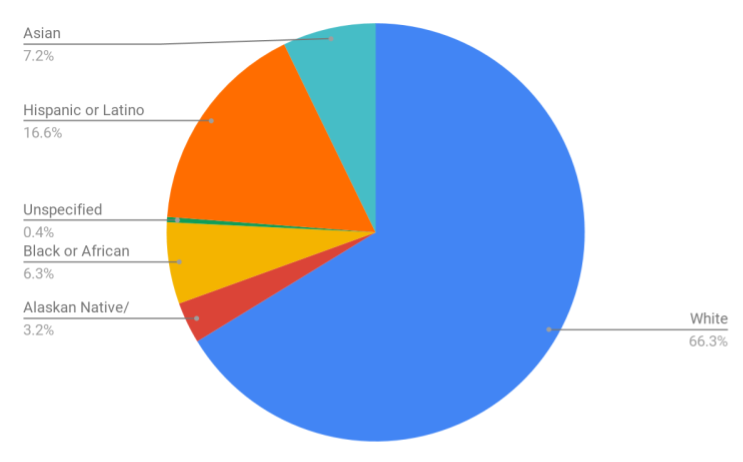 Alexandra Conte/Catalyst The racial demographics of the 2018 cohort.

Seventy-nine percent of students are Florida residents, 18 percent of students are from out of state and 3 percent are international students. The gender makeup of the class is 64 percent female and 36 percent male. This statistic is calculated based on self-reporting by students. The state of Florida does not include other pronoun options so these statistics might not accurately reflect the community.

“Last year we reported 233 students, so we are down by 11,” Joy Hamm, dean of admissions and financial aid, said. When asked if the growth plan would be affected by the decline in students over the past two years she said, “Not this year, obviously we need to grow our number but we have to balance that with the retention rate so we just made some adjustments with our admissions process this year.”

Parting from tradition, new student demographics were not released to faculty and staff during the first meeting of the year in August.

“We have been working on getting in some last minute final transcripts so that we can calculate final GPA,” Hamm said in an email interview, explaining why the demographics have not yet been released. In person, Hamm said that this delay is because when some students apply they use the last set of grades they received from their junior year in high school, and their GPA could be different than on their final transcript.

In the past the Catalyst included the incoming cohort demographics in the first issue of the academic year. The first issue always falls in early September. The Catalyst website is updated a few days after the print version is released.

“We’ve never known who is in the entering class until after the contracts and first tuition payments come in,” President Donal O’Shea said in response to an email asking for information concerning the demographics.

The demographics show that the entering cohort is very disproportionate in both gender and race and ethnicity.

“I feel like with the limited number of students of color it only creates an opportunity to show diversity through tokenization through the students of color,” third-year Cabrini Austin, vice president of diversity and inclusion initiatives (VPDI), said. “If you look at the flyers or advertisements of the school you find the token black person and it sucks but from a black student looking at the flyer it’s like, ‘Oh okay,’ but then the demographics say something different.”

Tokenization is the process of using minority students to appear ethnically diverse on campus, making it more appealing to prospective students. Austin believes that it is up to the students to organize resources to support minorities because administration does not currently do so. Their position is to serve as a liason for the student body in the New College Student Alliance (NCSA), which includes hosting a bi-weekly Council of Diversity and Inclusion meeting. This is when the student body and representatives discuss their issues and how organizations on campus could work to become more inclusive.

“We try to let first years from minority backgrounds know that certain organizations exist where they could go and feel comfortable,” Austin said. “I started going to Black Student Union (BSU) meetings, where it was very affirming and validating to be in a space with people who experienced what I felt. There wasn’t a BSU four years ago but now you can see the campus get more diverse.”