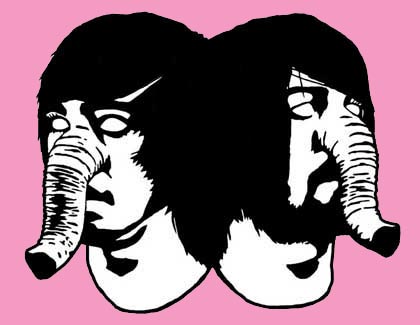 The cover of You’re a Woman, I’m a Machine. featuring the band’s logo. “To see my silly elephant trunk idea become so popular […] I’m sure it’s the greatest piece of graphic design I’ll ever do,” Keeler said on the band’s blog.

On the morning of Dec. 25th, 2005, I gingerly tore the paper off of a tiny box-shaped package to discover, to my delight, that I’d been gifted Death From Above 1979’s first major studio album, You’re a Woman, I’m a Machine. I’d been recommended to check out the Toronto-based alternative pop-punk duo by a friend, and since he was Canadian and cooler than me (a deadly combo to be sure) and I was a freshman in high school and highly impressionable (same deal), I obliged him. I soon retreated to my room to give the CD a listen and I loved them right off the bat.

On the afternoon of Aug. 4th, 2006, I paid a visit to the band’s blog to discover, to my dismay, that Death From Above 1979 was officially quite dead. What greeted me were the apologetic words of bassist Jesse F. Keeler: “I know it’s been forever since I wrote anything on here,” he said. “I’m sure by now most of you assume the band isn’t happening anymore since there are no shows, no work on a new album, etc. Well, I wanted to let you know that your assumptions are correct. We decided to stop doing the band.”

At that point, there had been more than a few rumors floating around that things weren’t going terribly well between Keeler and drummer/singer Sebastien Grainger, and the blog post confirmed them. “Over the last 3 years of touring, Sebastien and I had grown apart to such an extent that the only real time we spoke was just before we would play and during interviews,” Keeler said. “We both changed so much that the people we were by the end of it […] probably wouldn’t have been friends if they were to meet for the first time again.”

Still, the announcement came as quite a shock. After all, You’re a Woman, I’m a Machine, first released in 2004, had defied the odds of the genre and sold well enough to achieve gold certification in Canada, and the band had the live-show popularity to match, sneaking their way onto network TV appearances and large concert shows without compromising their “underground” cool factor.

On top of all that, they totally rocked. Eschewing a lead guitar in favor of gritty, grimy distorted bass riffs, chaotic, fast-paced drumming and a splash of post-production synth, Keeler and Grainger produced a wonderfully deep and fuzzy end result that had the noise and sleaze of pseudo-punk and the undeniable charm of indie pseudo-pop. Though virtually all of You’re a Woman, I’m a Machine stands out to me as a smashing success, songs like “Romantic Rights” and “Going Steady” — short and sweet, heavy and rough-around the edges yet incredibly catchy, reminiscent of The Hives — go out of their way to prove, like The White Stripes did a few years before, that two people with a few instruments between them can rock out just as hard as any full-fledged band.

Still, bands do break up, for better or for worse. The two went on to concentrate on their own musical side projects. Keeler in particular focused his attention on his electronic band MSTRKRFT, whose debut album, The Looks, had been released just a month prior to the breakup (they would then go on to release the vastly-superior Fist of God three years later, but that is another story). Death From Above 1979 was missed, but I’d come to cope with their early demise. Time passed, and I sought solace in distinctly-less-dead bands.

Then, just a week or so ago, while talking to a friend on the phone, he advised me to check out the band’s blog — apparently, rumors had been floating around about Death From Above 1979 being on the lineup for the April 2011 Coachella Valley Music and Arts Festival in Indio, Calif. Intrigued, I paid the blog a visit and discovered, to my welcome surprise, a post by Grainger that confirmed them.

“Why not say YES to Coachella?” Grainger said. “Why not say YES to playing the music we designed to be an undeniable source of power? Why not say YES to stirring up a writhing pit of sweaty humans? YES to riots! YES to heavy music! YES instead of maybe, and YES to make death your adviser and remind yourself always, that this is not a dress rehearsal. This is the big show. Jesse and I have decided that what we can do together should not be denied.”

In addition to playing at Coachella on April 17, the band has several live shows scheduled for May — two in London, England, one in Krems, Austria, and one in George, Wash. Granted, none of these spots are anywhere close to within my reasonable travel distance, but I nonetheless feel I, as well as other fans of the band, have quite a lot to be excited about.

Could this reunion see the resolution of Keeler and Grainger’s differences and transcend its temporary status? Maybe full-time touring is once again on the horizon, or even a much-needed second studio album? The possibilities are great, to be sure. For the time being, here’s hoping the two become a permanent pair once more, because Death From Above 1979 is a band that ought to be quite a lot more than dead.