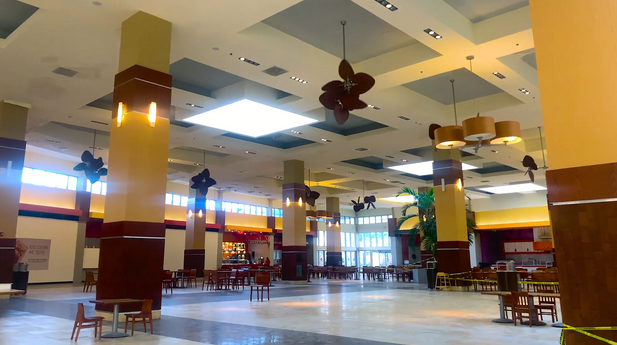 Flashy stores, salted pretzels, coin-operated kid’s rides that looked like they were ready to come to life right off the metal grate where they sat. For many, this is what childhood memories of mall visits entailed, but what happened? Across North America, malls are quickly disappearing. Whether they are being demolished due to age, or have simply failed to keep business afloat, it is clear that the wondrous shopping centers that Americans in the late 90s early 2000s grew up with won’t be around much longer.  With the rise of online shopping, the demand for in person options is quickly declining and the introduction of the coronavirus pandemic exponentially quickened the process, but is convenience really what these malls were made for?

After some research, the Catalyst stumbled across the origin story of the modern day American shopping mall and how it came to be. It all started with the opening of the Southdale Shopping Center, located in Edina, Minnesota. This mall is considered to be the first, and the oldest, fully enclosed shopping mall in the United States. While stuck in Detroit during a snowstorm, architect Victor Gruen approached Oscar Webber, the head of retail company Hudson’s—which was, at the time, the second most popular right behind Macy’s. When speaking to him, Gruen proposed opening a shopping center of his design within Detroit featuring the Hudson’s store. Webber initially declined, but due to customers branching out from cities and living in suburbs in the following year, he finally agreed to fund a set of malls.

Originally Viktor Grünbaum, Gruen left Austria in 1938 and made a life for himself working in the retail and shopping design field. Gruen became a big name in the retail world and is seen as the founder of impulse shopping tactics such as window display and, of course, the modern mall.

All retail spaces are designed to get you to buy as much as possible no matter what your trip to the store was originally for. When you go to a store for something in particular, and end up with a cart full of goods you didn’t know you needed, you can blame it on Gruen. Shops are always trying to look beautiful, welcoming and clean. The items are displayed in such a way that the consumer will hopefully begin to buy compulsively, producing more business with less customers visits.This is what retail experts have designated as “The Gruen Effect.”

When suburban living first became popular, suburbs lacked what sociologist Ray Oldenburg has described as “third places.”  Home is the primary place, work is a secondary and a third place can be anywhere else people can interact within their community. With the rise of a car-centric society, Gruen wanted to design an indoor plaza that encompassed greenery as well as shops, and forced people out of their cars and homes to connect. In his book, “From Centers for the Urban Environment: Survival of the Cities,” he talks about “the vicious circle” which depicts the changes made to society with the new widespread use of cars. In his eyes, the shopping mall was a solution both commercially and sociologically with the potential to share the future of shopping in America.

When was the last time you went out just to browse a store? It’s a simple question that many have a similar answer to: Why go out when I can just order it on my phone? Many experts have gone on record linking the fall of American malls to the advancement of online shopping companies such as the widely known corporate giant, Amazon. In 2021 alone, Cyber Monday managed to make just over $10 billion. This links back to the idea of convenience being number one.

As technology continues to progress, it is getting harder for in-person shopping options to stay afloat. Retailers are spending millions of dollars on renovations, trying to catch up with newer shopping centers as well as the changing expectations of shopping in today’s society. A big factor that pushed these online ideals was the outbreak of COVID-19. Big names in retail such as JCPenney, Sears and Tuesday Morning all had begun to face dwindling sales numbers, and with this introduction of the pandemic, they and many others took the killing blow and have begun filing for bankruptcy.

These companies are just a few out of hundreds that have fallen victim to the “Retail Apocalypse.” This term refers to “the decline of brick and mortar retail in the United States due to the meteoric rise of eCommerce.” Studies have shown that electronic sales generated an 11-20% increase during the holiday season as compared to their in-person predecessors having only a slight increase of 1.6%. As malls are so common in America, appearing at two times the rate of the population, it is no surprise that they have begun to struggle with staying afloat.

The Sarasota Square mall opened in 1977 and has now become an aging monument to the shopping history of the city. Ask anyone who grew up in the area at the time and they will most likely talk about their times at the mall as a teen, getting their first tastes of adulthood freedoms. Now it can be seen, rotting ceiling tiles exposing the inner metal workings of the building, a skeleton rotting in its grave. Surprisingly though, it seems that efforts to restore the building have begun as ceilings and walls are being repaired, but no official statements about the plan for the future of the mall have been brought forward to the public.

With changing times comes adaptation. It is clear that America’s classic shopping mall is in a state of liminality, the future uncertain, but there still might be hope. In 2022, there has been somewhat of a resurgence of shopping malls. It is suggested that society is moving into the post-COVID stages and analysts are surprised at the growth in the numbers of those visiting malls this year.

The malls of today may be a far leap from the ones of the late 90s and early 2000s, but updated installations and remodels in a post-COVID society point to a slow and steady comeback.