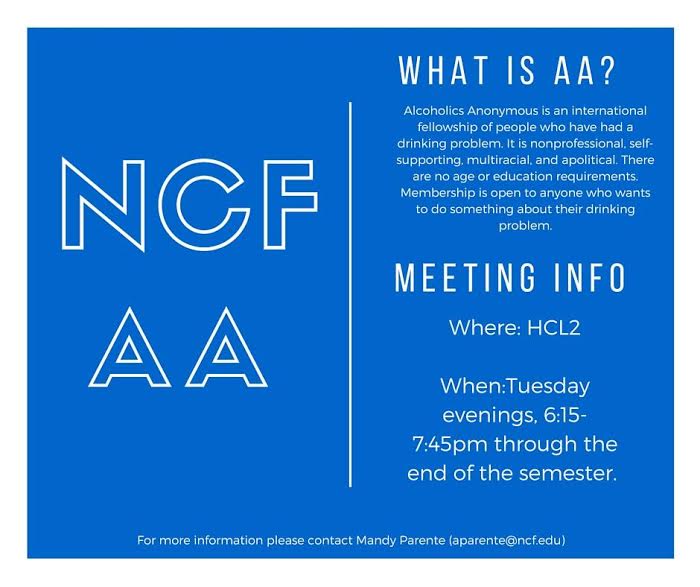 The National Institute on Alcohol Abuse and Alcoholism (NIAAA) defines binge drinking as: “A pattern of drinking that brings blood alcohol concentration (BAC) levels to 0.08 g/dL. This typically occurs after 4 drinks for women and 5 drinks for men – in about 2 hours.” For most shandies players – and many college students – four drinks in two hours is a slow night.

Alcoholics Anonymous (AA) returned to New College this semester in response to increased student interest in programs that cater to individuals with addictive patterns or behaviors. According to the NIAAA, 80 percent of college students have abused alcohol in college. Alcohol abuse includes binge drinking, daily drinking (the primary cause of physical alcohol dependence), alcohol poisoning and self-admitted misuse of alcohol. The last attempt to bring AA to campus was four years ago. After students stopped going to the meetings they were co-opted by Sarasota community members who felt that holding their meetings on campus was counterproductive for a group that consisted of only non-students.

“AA is something that we [the administration] have been talking about since the Task Force met over the summer,” Health Educator Mandy Parente said. “We were a little hesitant to bring it back, but when we had so many students asking for it we decided that we would go ahead and try it again. Just because it didn’t work with the students four years ago doesn’t mean that it won’t work this time.”

AA is a 12-step program that was created in the 1930’s by two individuals suffering from alcoholism. Centered on the importance of anonymous peer support and the designation of alcoholism as a disease, AA is structured around peer-run meetings that promote the program’s 12 steps and support individuals in their attempts to remain sober. According to AA’s published materials: “The only requirement for membership is a desire to stop drinking. AA is not allied with any sect, denomination, politics, organization or institution; does not wish to engage in any controversy; neither endorses nor opposes any causes. Our primary purpose is to stay sober and help other alcoholics to achieve sobriety.”

Parente said that while AA is not for everybody, and it’s not the end-all be-all solution to alcoholism, having the option on campus is important. “People who might not get something out of it will hopefully recognize that just because it didn’t work for them doesn’t mean it won’t work for someone else. I would encourage anyone who thinks AA may be beneficial for them, or who is having issues with alcohol abuse, misuse or alcoholism to definitely try it and see if it works for them before being like ‘No, I’m not doing this thing.’”

The program’s emphasis on complete abstinence from substance use of all kinds and the importance of relying on a higher power (the definition of which is open to relatively broad interpretation) have posed some difficulties when appealing to certain demographics – including college students.

“AA’s emphasis on spirituality could be problematic, it could not,” Parente  said. “I think that if students want to get help and they are hesitant to go to AA because of the program’s emphasis on spirituality they should definitely try it and see how it feels, see if it’s comfortable for them, and if it’s not, then reach out to other resources. Definitely give AA a try before deciding ‘It’s a God thing, and we’re not a God-y campus.’”

AA meetings are run completely by members of the community, allowing the meetings to be shaped by the needs of the individuals involved in the group – although the 12 Steps and members’ desire for complete sobriety are the program’s keystones. Meetings can be open or closed. Open meetings are accessible to any interested individual, regardless of their sobriety or affiliation with the group, while closed meetings are private, allowing only individuals who are currently involved in (or have already completed) the 12-step program.

“I don’t think that with a student-led group the emphasis on spirituality will come through as much,” Parente said. “Lets say it’s a group of eight students and one or two community members, the students can have the conversation in the way that feels comfortable to them and spirituality might not necessarily be a large part of that conversation.”

In addition to AA there are a number of other programs available to students who feel that substance abuse or  addiction has, or could have, a negative impact on their well being. For those dealing with non-alcohol related addiction, there is the AA-affiliated Narcotics Anonymous (NA), which will be coming to campus this summer. Some off-campus alternatives to AA include Women for Sobriety (WFS), an organization that attempts to deal with addiction from a female perspective, emphasizing female empowerment as opposed to AA’s message of humility. The Secular Organization for Sobriety (SOS) is another alternative that was developed by an AA member who felt uncomfortable with the program’s emphasis on turning your life and your addiction over to a higher power.

“There’s a huge movement right now in the collegiate health education field to create a program called ‘Collegiate Recovery’ as an alternative to AA,” Parente said. “It’s meant to be very specific to the campus culture and to college students in general. Health professionals know that college students who are in recovery or who are trying to get onto the recovery path are going through something completely different than say, a 40-year-old who has been drinking a six-pack a day for his entire life.”

Collegiate Recovery Programs (CRPs) were designed by the Association of Recovery in Higher Education (ARHE) to cater specifically to college students who are living on campus or are involved with campus life. Some of the projects promoted by CRPs include on-site sober housing, the promotion of self-help meetings on campus (such as AA) and increased availability of individual counseling. The aim of the CRP programs is to create a campus-based, recovery-friendly space through the development of a supportive social community that will enhance students’ recovery process while promoting personal growth.

“Collegiate recovery is moving away from AA, it’s focusing on college specific problems and the specific culture of a college campus, that way students feel like they have more ownership over the program and feel more comfortable coming to meetings,” Parente said. “The collegiate recovery group is where we’d like to go long-term, it’s the plan, but it just wasn’t something that was feasible for this semester. We didn’t have the resources to do it right now, but it is something that we’re pushing to have brought to our campus.”

Along with alternative abstinence-focused support groups there has been an increase in moderation-centered recovery programs over the past decade. Previously considered detrimental to individuals’ with addictive tendencies, many rehabilitation and treatment centers have been advocating for safer substance use as opposed to complete sobriety. Moderation Management (MM) is one of the largest national support groups for individuals who are concerned about using substances safely through a moderation-based approach to recovery.

“I think that on campuses that aren’t New College it’s easier to have conversations about substance abuse because students aren’t as willing to be open about what they’re using or misusing, and also they’re not as educated on what their rights are, or what’s going on in the world of drug policy, and what they think their rights should be,” said Parente said. “Here the conversation tends to be: ‘we should all experiment and we should be able to do what we want with our bodies and we’re adults.’ While at other schools I can be like ‘It’s illegal’ and they’re like ‘Okay.’ And like here if I’m like ‘it’s illegal,’ that’s not the conversation that happens.”

The inherent contradictions in the simultaneous promotion of harm reduction and sobriety-based recovery can be confusing for individuals attempting to seek help in an environment that promotes, and some say even glorifies, the use and abuse of substances – both legal and illegal.

“I want to emphasize that if you think it’s important and if you think it’s something you want to try, try it and at least go once or twice and get a feel for the meetings and see if they can be helpful because I think that they can be for a lot of people – regardless of the spirituality piece,” Parente said. “If you are experiencing any issues with alcoholism or substance abuse or misuse I want to encourage people to reach out to a counselor at the CWC, or me, or just somebody so that way they can get the help that they need if they think that they’re going to start spiraling down any sort of substance abuse issues. It’s super important that people get help before it becomes super problematic.”