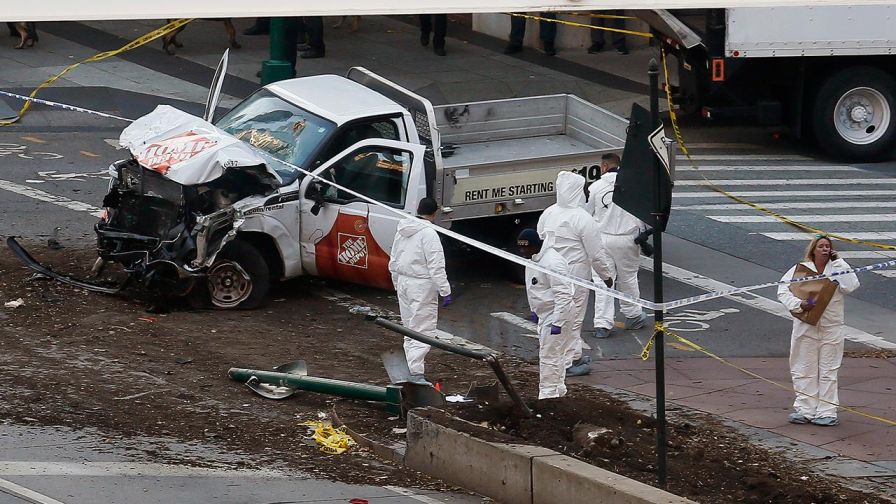 Twenty-nine-year-old Sayfullo Habibullaevic Saipov drove a rental truck through a pedestrian and bike lane along the Hudson River in Lower Manhattan on Tuesday, killing eight people and injuring 11 in the deadliest terror attack on New York City since 9/11.

According to the New York Times, the rampage ended when Saipov crashed into a school bus, jumped out of his truck and ran along the highway while waving a pellet gun and a paintball gun.

Reports indicate that Saipov, a Uzbekistan native who has been living in New Jersey since 2010, was shouting “Allahu akbar,” Arabic for “God is great,” before he was shot in the abdomen by an officer.

Investigators found handwritten Arabic notes near the truck that suggested allegiance to the Islamic State of Iraq and Syria (ISIS).

Joon H. Kim, acting U.S. attorney for the Southern District of New York indicates that Saipov is charged with providing material support to ISIS, violence and destruction of motor vehicles.

Reviewed by law enforcements, one of Saipov’s cellphones contained approximately 90 videos, “many of which appear to be […] ISIS-related propaganda,” the complaint indicates. The phone also contained around 4,000 images, many of which were reported by the Federal Bureau of Investigation (FBI) to be ISIS propaganda.

The complaint also states that Saipov conducted a truck attack “to inflict maximum damage against civilians” and that he chose to strike on Halloween “because he believed there would be more civilians on the street for the holiday.”

President Donald Trump said that the shooter should be executed.

“NYC terrorist was happy as he asked to hang ISIS flag in his hospital room. He killed 8 people, badly injured 12. SHOULD GET DEATH PENALTY!” the president tweeted late Wednesday night.

“Based on the information we have at this moment, this was an act of terror, and a particularly cowardly act of terror aimed at innocent civilians,” de Blasio said at a news conference. “Anyone who wants to come into this country should be very thoroughly vetted as an individual, but the minute you start generalizing it, especially to a whole religion, then unfortunately we’re sending the exact negative message that a lot of our enemies want and the terrorist wants to affirm–that this nation is somehow anti-Muslim. We’ve got to do the exact opposite.”

Information for this article was obtained from nytimes.com, cnn.com and bbc.com