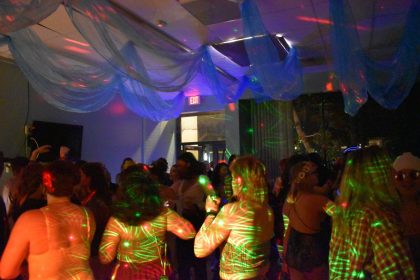 Residential campus, from the typically busy and bustling Hamilton Center to the farthest reaches of Dort and Goldstein, was dead silent on the morning of Saturday Feb. 29—a clear indication that this semester’s highly anticipated Bacchanal Palm Court Party (PCP) was a major success. Friday night’s festivities brought students of all years, AOCs and social groups together to celebrate in style, following third-year students and PCP hosts Ella Rennekamp and Isaac Denner’s elaborate Dioysian theme.

“New College (NCF) is all about freedom—academic, social, and existential,” Rennekamp and Denner wrote in their initial theme proposal email. “The Bacchanal—an ancient Greek festival of Dionysus—is a celebration of complete freedom and revelry. As we see NCF become more and more vanilla, shedding its founding student-first principles of freedom in favor of more conventional university institutions, we’d love to embrace a self-determined, student-led NCF.”

The night, which featured local band performances, student DJ sets and striking visuals, undoubtedly lived up to the hosts’ expectations. Students spent their time jumping from location to location, dancing the night away in Atlantis (the Old Mail Room) and Hades (the Band Room), enjoying live music of all varieties at the Coliseum (Z Amphitheatre) and the Bacchanal (the Nook) and taking some time to recover in Elysium (HCL 7).

“The vision was basically people just letting loose and running around and socializing with each other and just feeling good,” Rennekamp said. “It’s always amazing at PCP, it is very fast-paced a lot of the time, but then you run into someone and have this really enthusiastic encounter with them. All the interactions that you have feel very meaningful that night.”

Third year and “Aphordite’s dungeon” DJ Danielle Whiting also cited the friendly and supportive atmosphere as one of her favorite parts of the night. To many students, Whiting included, PCP is all about the community that surrounds it and the student-to-student connections it facilitates.

“It’s a good opportunity to really see how much the New College community cares about one another and just let go and dance together, in the spirit of the Bacchanal,” Whiting said.

Bacchanal PCP brought the New College community together in more ways than one—preparing for the party, according to Rennekamp, took many hours of hard work and collaboration from the helpful students who assisted their hosts in turning their PCP dreams into reality.

“We started making the decorations pretty late and we put them up the last day,” Rennekamp explained. “We kind of just encouraged everyone who was helping out to use their creative insight and do whatever they thought looked best and it really paid off, like the Banyan tree looked amazing. I would say the lack of planning for decoration was stressful but that gave people the freedom to do what they wanted with the decorations and it was very collaborative, which was cool.”

Students also made this campus-wide event possible through their hourly volunteer positions as Fairies (floating caretakers) and Dryads (supportive sitters). Second year and Students for Sensible Drug Policy (SSDP) member Beau Perkins, who worked in both positions this PCP, believes that having these resource-providing, guiding forces around campus is essential to the night’s success.

“PCP is a magic gift of tradition,” Perkins said. “With it unleashes a hectic and unpredictable air of catharsis all across residential campus. Often, though, the magic can be a little too much, and there arises a need for a grounding force. Dryads and Fairies are that force, providing home functions and harm reduction to our community.”

All involved students played equally important roles in making this year’s Bacchanal PCP the Grecian wonder that it was. However, it is clear that Rennekamp and Denner put everything they had into providing the New College community with an unforgettable night, and by Rennekamp’s standards, it was entirely worth it.

“I spent most of the night just watching other people, and most of the time it looked like they were having a lot of fun,” Rennekamp said. “What I’ve always gotten out of PCP is that it reminds me that New College is special. You can have a good time here and it’s not just about the academic stress. There’s some seriously unique, incredible people here, and under a circumstance like PCP, which is just about having fun and letting loose, you actually get to see that side of those people.”