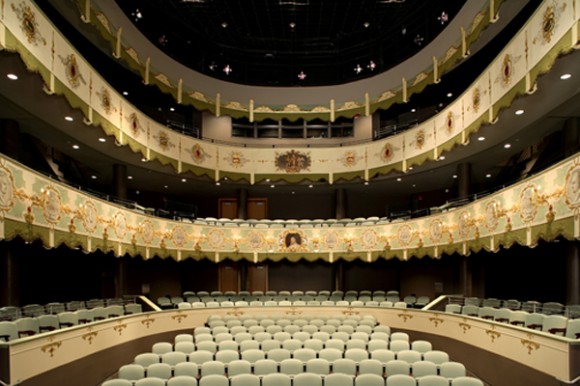 The inside of Ringling’s Historic Asolo Theater, where each dance company performs.

Since its inception in 1927, the Ringling Museum of Art has brought and showcased the contemporary art of its time, often to the ire of critics. In fact, this year the Museum has taken up a new challenge in its effort to keep the tradition alive through a program entitled “Art of Our Time.” The 2011 season presents a sequence of performances by different five modern dance companies, companies whose choreography and presentation have garnered the attention of audiences nationwide. The first of the companies to take up a short-lived residence in Ringling’s Historic Asolo Theater (HAT) was Monica Bill Barnes & Company.

Hailed for her “witty [choreography] that can stir your heart as well as make you laugh” by The Village Voice, Barnes’ performances ran from Jan. 27 to 29, with four performances total. The first half of the show featured hilarity, with one dancer catching and stacking large cardboard boxes as they were thrown at her, but was also touching as Barnes herself completed a beautifully choreographed solo number that was very accessible to all ages in attendance.

The second half of the show, following a short fifteen minute intermission, was even more entertaining. The company of dancers performed almost as actors would, engaging the audience with humor in movement as well as facial expressions. There seemed to be an ongoing joke, a mesh of the simplistic movement of the shaking of hips, intertwined with the more strenuous activity of boxing with an invisible antagonistic opponent. The climax of the entire performance came, however, when each of the four dancers entered the audience and enticed four captivated members to join them on stage. Overall, a performance that truly should not have been missed.

The second of five companies hosted by the HAT was OtherShore, who held the stage from Feb. 10 through 12. Having performed once before at the Ringling International Arts Festival in 2009, OtherShore returned with new choreography and faces — something not so out of the blue for a company heralded as “a good advertisement for stylistic diversity” by The Village Voice. During their residency in Sarasota, OtherShore debuted two world premieres described as “quirky, enigmatic and intriguing” by the Sarasota Herald-Tribune.

“The Goats,” one of their new releases, was a half-spoken, half-danced narrative that gave semblance to old children’s fairy tales, but without the happily-ever-after. The idea was supported by the stage, which was laid bare except for the odd sprinkling of the seemingly randomly placed props of a child’s pink suitcase, a red snow sled and a brick. The ending was dark, highlighted by the cackling of a mad “child,” followed by a smattering of applause and then complete darkness. The strange and thought provoking performance was well received by a small, but intimate audience.

Yet therein lies the problem. Although both companies’ performances were amazingly executed and beautifully delivered, the one issue for many potential audience members is the price of tickets. At the Historic Asolo, tickets can range between $15 and $35 a pop — not a frugal use of money to the average high school or college student, even if the performance is worth the money. But fear not, penny-pinchers and tightwads! Due to the generous donations of a philanthropic couple, 200 seats for each company’s performance are to be distributed free for students who are willing to show their IDs at will call. The couple, who wished to remain anonymous, desired for “students to be able to witness high-end performances.”

The last three companies who will be performing for free student seating are Eiko & Koma (Feb.24-26), Bill Bowers (Mar. 10-12), and the Kate Weare Company (Mar. 24-26). Performances are held at the HAT on Thursday through Saturday evenings at 7:30pm and Saturday afternoons at 2:00pm. The seats were completely paid for by the anonymous duo and all the proceeds go straight to the Asolo Theater.