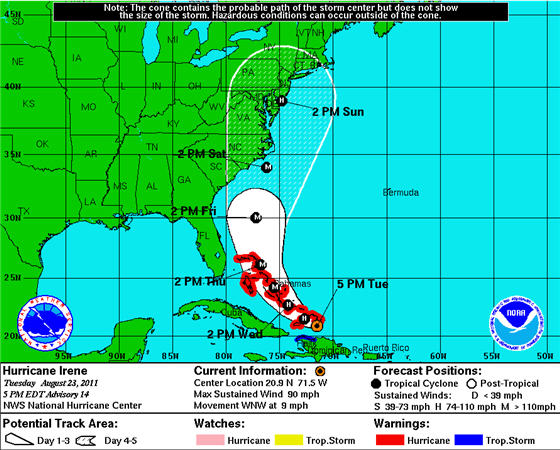 Projected path of Hurricane Irene as of Aug. 23, from the National Hurricane Center.

Days after Hurricane Irene swept through the Eastern Seaboard, death tolls and the cost of damages continue to add up. As of press time, an estimated 44 deaths have been attributed to Irene. Flooding accounts for most of the storm costs, which are estimated between seven and ten billion dollars. According to the Los Angeles Times, taxpayers will bear much of that burden due to a lack of flooding insurance in the northeast and the $17 billion debt of the National Flood Insurance Program.

New York, Vermont and Philadelphia were among the states most devastated by Irene, which began as a Category 3 hurricane and made landfall in the Bahamas on Aug. 24. Eight states declared a state of emergency by Aug. 27 and 2.3 million people were ordered to evacuate. By the time it reached New York City on Aug. 28, Irene was downgraded to a Tropical Storm, with 65mph winds. Airports and public transportation were shut down in New York, Philadelphia and Washington, with the New York subway lines reopening on Aug. 29.

Former New College student Lindsey Shields (’07) of King’s Park, Long Island, said, “There were power outages throughout Long Island. In Patchogue, people were riding their jet-skis and canoes on the streets—they were filled with water!” According to Shields, as of Aug. 30, downed tree branches still littered Long Island streets. The New York Times reported that about 1,500 trees in New York were thrown down by the storm.

Alum Juliana Nalerio (’07), a resident of Astoria, Queens, said, “I wasn’t really worried, because I’m from Florida and I’ve lived through some really bad hurricanes … New Yorkers were afraid because they’re not used to getting hurricanes up here and there was a lot of media hype, so they were buying water and canned foods, making preparations for the storm and then it was kind of a disappointment, much less severe than people expected, which is good. Life has pretty much returned to usual in the city and very quickly.”