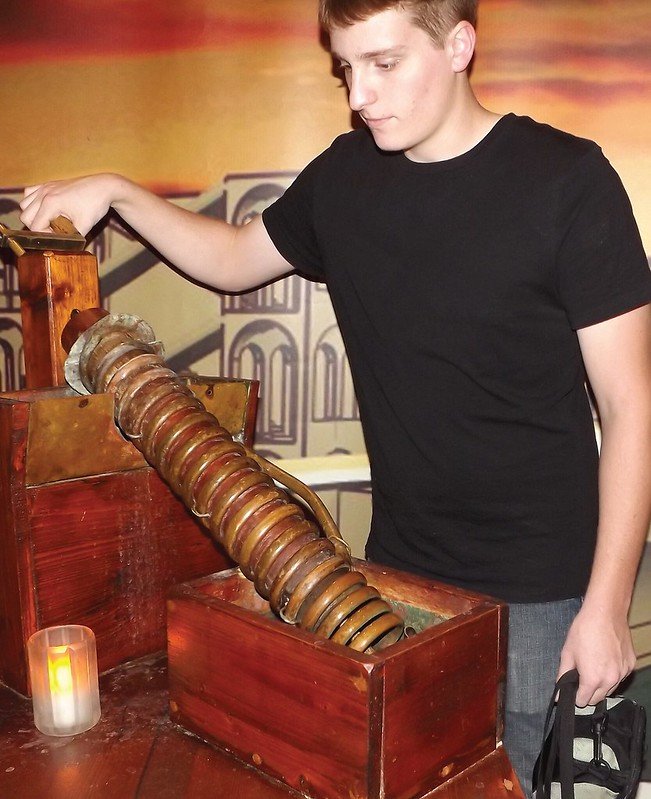 It is estimated that Leonardo Da Vinci created more than 44,000 drawings of models, only 14,000 of which have survived. The traveling Da Vinci Machines Exhibition, currently at the Bradenton Auditorium, has recreated some of the inventor’s most fascinating designs. The exhibit is divided into four sections: military, flight, hydraulics and machines. Out of the 60 models, 50 percent of them are interactive, allowing patrons to figure out how these designs work first hand.
The United States, Asia and Europe each have their own traveling exhibit designed and created by hand by third generation artists at the Museum of Leonardo Da Vinci in Florence, Italy. Each model is paired with a copy of the original codex that shows the design as Da Vinci first drew it. There are 10 codices, one of which is owned by Bill Gates.
The American exhibit has been running for four years, Bradenton being its fourth stop. The event overall has been running between five to 10 years in other continents. The director of the North American exhibit, Mark Rodgers, was previously a real estate agent before he was asked by a friend to get involved four years ago. He had never been in charge of an exhibit but was eager to be a part of it. “I am so glad that I have gotten involved – it is such a rewarding experience,” he said of his role in the exhibition. Every month, the exhibition crew has to re-oil and re-stain each one of the models, due to the frequent wear of the interactive components.
Rodgers discussed how more than 2,500 of Da Vinci’s designs are still used today in everyday life. Some of his most known inventions include the first helicopter, ball bearing, life preserver, armored vehicle and parachute.Also on display are accurate digital copies of some of Da Vinci’s most prolific paintings including “The Last Supper” and “Bacchus.” “These scans are the closest you can get to experiencing the real versions in Italy,” Rodgers explained.
The exhibit has been in Bradenton since November and has been extended three times, due to the large amount of interest. The event is now opened until July 7. Student tickets are $13.95 with a valid student ID.