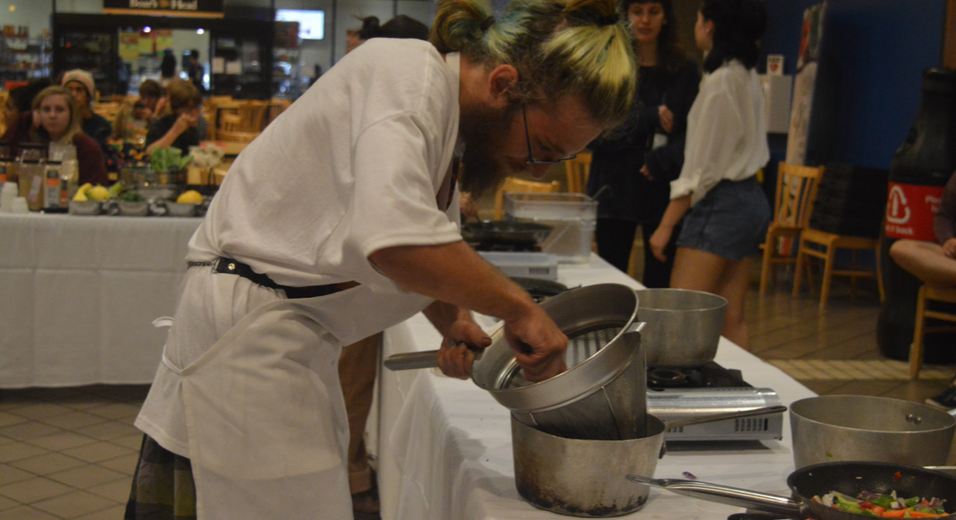 With the recent announcement of Food Network shows being removed from Netflix, college students everywhere mourn the loss of an era. But for one short evening, one of the soon to be axed shows, Alton Brown’s Cutthroat Kitchen, made its way to the doorsteps of New College dorms.

NCF Cutthroat Kitchen was once an event planned by the hopeful – and the then Z Hall Resident Advisor (RA) Miles Iton. After becoming New College SA co-President the following year, Iton, along with co-President and fellow third-year student, Paul Loriston, planned to recreate the cult classic show in Hamilton “Ham” Center on Friday, Nov. 18.

“We felt as if the community needed to get together and just have fun together,” Loriston said, who stated that seeing the community building that took place at the event was his favorite part.

The following event also marked the first time that a collaboration between Housing, Metz and the NCSA has happened, something that Iton affectionately refers to as a “three-way cross over.”

“This was more difficult to do last year with all the difficulty we had with Student Affairs,” Iton said. “But this year, with Robin [Williamson] and Jess [Maxon], this really was a wild success. This was something that a lot of students had been asking about.”

Students were allowed to enter the competition under the guise of competing single-handedly, or in pairs. However, upon arrival, competitors were notified to form four teams, changing the dynamics of the room in seconds. During round one, Competitors were given a table filled with ingredients and given twenty minutes to make appetizers. Two teams were sent home, leaving two teams–and only eight students remaining–cutting the size of the competition in half. The finalists were one team consisting of second-years Jack Belk and Colin Mulligan with transfer Olivia Short. While the second team consisted of second-years Ashley Brockoway and Abigail DiGregorio with thesis student Marianna Bonilla.

“I found it to be a beautiful event that challenged people’s creativity,” transfer student and Four Winds employee, Savannah Hawk, said. “There’s definitely a time constraint when you’re working at Four Winds, although you know the ingredients when you come to work.”

After much deliberation from judges Dean of Student Affairs, Robin Williamson, Director of First Year Programming Jess Maxon and Event Coordinator, Tara Centenno, Belk, Mulligan and Short were the winners of a pizza party worth 100 Ham points, while the second team each won a Metz gift card worth 15 Ham points. The winning meal would be served in Ham the following week.