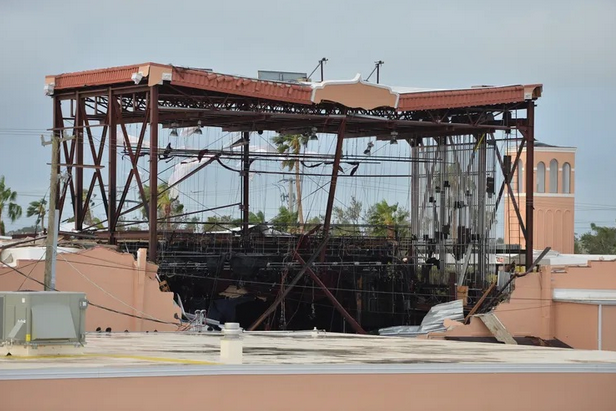 Exposed infrastructure of the Venice theater after the destruction of Hurricane Ian.

In the violent wake of Hurricane Ian, the nearby Venice Theater was taken from the community. Twelve inches of rain, a collapsed fly loft and damaged electrical grids left the theater a molded framework skeleton and the crushed set of The Revolutionists—the production originally set to premiere before the disastrous storm—fell beneath the rubble.

Volunteers and performers intended to showcase their hard work to audiences Oct. 9. However, all events are on hold due to the devastation inflicted by Hurricane Ian. Venice Theater’s Producing Executive Director Murray Chase represented the staff’s emotions in an online statement.

“The gut punch took our breath away the next day when we saw it live,” Chase announced. “There were sobs and tears, weariness.”

“It’s hard to know everything until they can get in there and really see what happened,” Chase stated in an article written by the Sarasota Herald-Tribune. “We’re talking several million dollars. If we get it done in a year I’ll be gleeful, but I think it will take longer. Architects, engineers, contractors and volunteers are currently investigating the damage. A 30 person team of ServPro crew members are aiming to troubleshoot mildew and mold as well.”

On the Venice Theater official website, there are options to help donate to the cause. Extending funds and volunteering to the organization is encouraged by the theater staff in order to come back from this disaster. In the words of Chase: “We will find a way.”