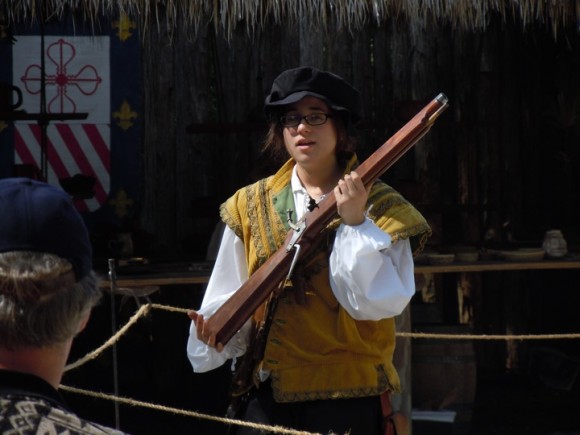 Lazarus demonstrates the proper use of the matchlock arquebus. This early firearm was used by De Soto’s army on their expedition throughout the southeastern United States.

“I liked history, but avoided trying to learn it,” she said. “The task seemed too huge and daunting. There is way too much history to learn and it’s all just the writer’s interpretation of events anyway.”

This past December, Lazarus found an opportunity to study history beyond the pages of books. As a Seasonal Interpretive Park Ranger at De Soto National Memorial Park she studied early Florida history, researching Hernando de Soto’s European expedition through the southern United States.

“Training was intense but fun,” she said. “I had to take a historic weapons training course, and become certified in the use of 16th century weapons.” During this training, Lazarus learned to use several replica weapons. She practiced with a longbow, a crossbow and a matchlock arquebus, an early firearm known for its frequent malfunction.

“The longbow is something archers, hunters and even girl scouts still use for fun, but the crossbow is extremely deadly,” Lazarus said. “I call it the ‘16th century revolver’ because all you do is aim and pull a trigger.”

After 16 hours of training, Lazarus had to pass an exam that included firing the weapons. “I accidentally misfired the matchlock on only my second attempt to shoot it,” she said. “[Thankfully] we were adamantly taught to always point the gun downrange. When it went off in my hand before we were given the command to fire, I jumped a foot in the air.” 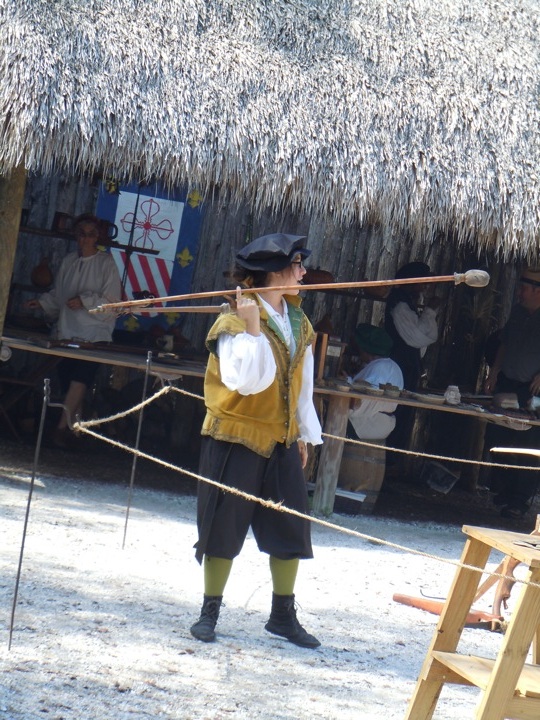 Using an atlatl, the Native Americans could launch spears distances accurately and with little physical effort. Lazarus aims a spear at a target across the camp as she gives her weapons presentation to an audience.

“These talks include ‘universals’, or principles that everyone can relate to,” she said, explaining the goals of the presentation.  “These talks need to be able to connect the audience to the history.”

Since starting her job in early December, Lazarus has given a few 15-minute presentations every day. She and the other rangers take turns, giving one presentation every hour from 10 a.m. to 4 p.m, each day.

“We each have a weapons

This slideshow could not be started. Try refreshing the page or viewing it in another browser.

, in which we talk about the weapons used by the Native Americans and the Spanish,” she said. “We also have a children’s talk for school groups, which is usually some sort of participatory question-and-answer talk about something easy to grasp. For example, we might give a presentation on the animals De Soto brought with him to the New World, usually incorporating props. We also give a presentation on any aspect of the De Soto expedition we choose.” Her favorite presentation is the weapons talk, because she fires the weapons and the audience loves it.

“We wear pretty much the same thing you see people wearing at Renaissance festivals,” Lazarus said. “This is because De Soto came to La Florida in 1539, near the middle of the Renaissance period in Europe. Although we are able to dress as Native Americans, we usually don’t because of the cold weather. It is actually probably more appropriate to dress as Spanish anyways, considering the camp we do our presentations in is a replica of a base-camp that was taken over by conquistadors.” Lazarus and the other rangers typically dress as men, because De Soto did not bring women on his expedition— at least not on purpose. 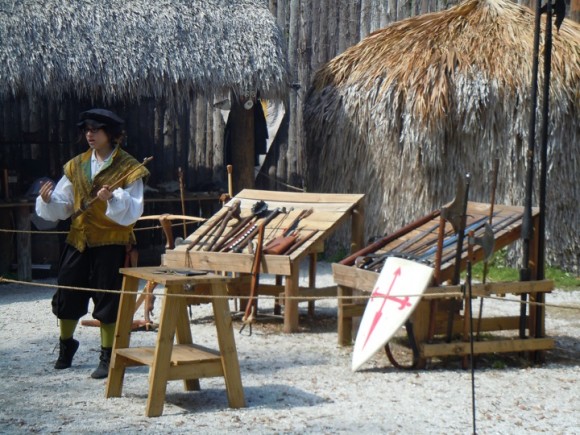 After 16 hours of extensive hands-on training, Lazarus has learned to demonstrate the use of many historic weapons. During her demonstrations, she shoots a crossbow and longbow at a target.

In costume, Lazarus normally wears cloth boots, long stockings, a large cotton shirt, a vest, plunder pants and a big floppy hat. “The plunder pants are big billowy pants that were stuffed with treasure,” she said. “The hat is vital: everyone wore some kind of head covering back then. It was just the style.” Some of the other rangers wear chain-mail or other armor.

After the demonstrations, visitors can look around the touch-and-feel museum. The base camp is filled with replica tools, clothing, armor, a blacksmithing station and weapons that guests are welcome to pick up. Rangers stand by to answer any questions.

De Soto National Memorial Park is host to a variety of visitors, from those in town just to escape the snowy weather up north to students from the area.

“The most surprising thing I’ve learned is that the young children are extremely smart when they are asked questions and in competition with their peers,” Lazarus said. “At one point I asked a group of fifth graders who was in charge of making the maps for the expedition and one little boy cried out, ‘the cartographer!’ I just started clapping right there.”

Her ability to connect to the park’s visitors through her demonstrations has been an important aspect of her job. “These talks need to be able to connect the audience to the history so they don’t become bored,” she said. “We are competing against Disney here in Florida after all. [We] want the visitors to have ‘a-ha!’ moments that allow them to take something away from their visit. We want people to keep coming back too keep attendance high and keep national parks funded and open.”