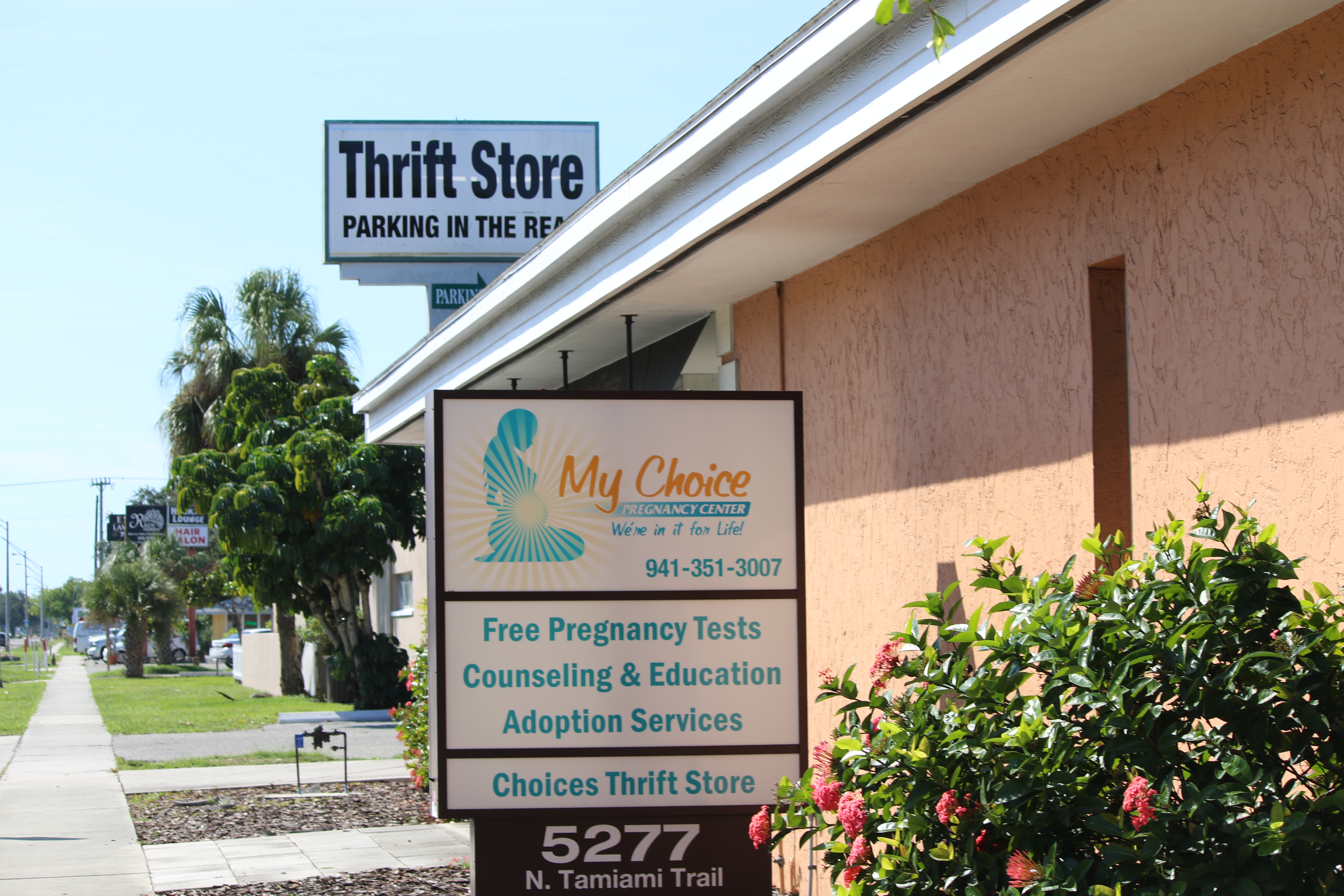 Charlie Leavengood/Catalyst A CPC located off of Tamiami Trail near New College.

In the state of Florida, there are around 200 crisis pregnancy centers (CPCs) and only about 30 Planned Parenthood clinics, according to Planned Parenthood Regional Organizer Annie Rosenblum. The former consists of mostly faith-based, non-profit organizations that offer care, counseling and resources to pregnant women. According to the American Medical Association (AMA) Journal of Ethics, CPCs act without any regulation that requires them to be medically accurate in their advice or to even have medical training.

“We envision a new reality where every person making a pregnancy decision is empowered to choose life for their child,” Care Net, one of the largest networks of CPCs in North America, states on their website. One of the CPCs central goals is to intercept people who are considering abortion and convince them to carry their pregnancy to term.

“They’ll strategically try to open their doors near a health care provider that offers a full range of reproductive healthcare options,” Rosenblum said. “There are volunteers from the crisis pregnancy center who protest our health center right next door on Tuesdays during our abortion service days and their main goal is to dissuade folks from entering Planned Parenthood.”

As the current administration appears to align heavily with conservative stances against abortion, crisis pregnancy centers are on the rise and will not likely be regulated by law any time soon. In the case of Florida and 14 other states, they are receiving state funding.

In March 2018, Justine Griffin reported for the Tampa Bay Times that Governor Rick Scott signed a bill into law that would allow for permanent state funding of “pregnancy support centers,” meaning that CPCs will no longer only receive funding on an annual contractual basis. Griffin also said in the article that the Florida Pregnancy Care Network, a pro-life coalition, has received $21 million in state funding since 2007 and $4 million in this fiscal year alone.

With this funding, money from donors and, in some cases, money from churches, CPCs are usually stocked with maternity clothes, food and diapers, among other supplies for prenatal and infant care.

Rather than providing medical care on site, CPCs refer clients to actual physicians or gynecologists and emphasize the importance of education and emotional support during and, in some cases, after pregnancy.

“I once called a crisis pregnancy center and asked what kind of options they provide for an abortion and who I could call. They said they didn’t know anyone in the area,” Rosenblum said. “They didn’t have any leads for me. They provide misleading information because there are abortion providers in [the Sarasota area] that I could go to.”

CPCs exhibit a pattern of targeting underserved communities, specifically women of color. According to a 2013 report put out by the National Women’s Law Center (NWLC), Care Net launched an Urban Initiative to reach “underserved and over-aborted women.”

While the centers can be a useful option for low-income people who wish to carry their pregnancy to term and need support, they often fail to provide unbiased guidance and information for those who may still be considering abortion.

A standard narrative of CPCs, including local centers such as My Choice and Sarasota Medical Pregnancy Center, represents abortion as a panic-driven, initial reaction to unplanned or “crisis” pregnancies. Abortion is also often treated as the result of external pressure from societal norms.

“Defaulting to society’s usual choice in an unplanned pregnancy, especially for a single woman, has become the societal norm,” Sarasota Medical Pregnancy Center said in a press release.

The National Organization for Women New York City (NOWNYC) brought up the fact that “a great number contain the word “choice” (e.g., Birthchoice, A Better Choice, etc.) to fool potential clients into thinking it’s a pro-choice clinic.” The choice that these monikers usually signify is the decision to carry a pregnancy to term and, from there, either parent or put the baby up for adoption.

“Taking the time to look at your other choices may prevent you from making a decision you will later find hard to live with,” My Choice Pregnancy Center says on their website. “We would like to encourage you to take a look at alternative options to abortion that give your child life and allow you the positive life-satisfying feelings that can come with parenting and adoption.”

At My Choice Pregnancy Center, resources offered include a freezer stocked with nutritious foods for mothers and children, a discounted thrift store with a wide range of clothing and diapers and classes that contribute to a rewards system where, after completion, prizes such as a car seat, a play pen or a breast pump can be selected. According to Director of My Choice Pregnancy Center Cheryl G. Huston, the classes offered are guided by Parenting Through Love and Logic.

Huston represented My Choice as neutral on the issue of abortion, not affiliated with Care Net and a resource for women in an underprivileged area.

“I’m a Christian, so I don’t want to mislead you, I definitely believe in life, I believe in God and I believe in women having a right to making whatever decision they make it’s between them and God,” Huston said. “I think that pregnancy centers get a real negative reputation as only places that are anti-this or pressuring that or misleading this way or that way, and I’m sure that happens but it doesn’t happen in our area.”

While My Choice may not be involved in any harassment, it certainly happens at the Planned Parenthood in downtown Sarasota.

Catalyst General Editor Audrey Warne was once approached by women claiming to be from a nearby CPC while pulling into Planned Parenthood for an appointment; they initially blocked her partner’s car from entering.

“[One of the women] started telling me I didn’t need to make this decision and that I had other options,” Warne said in an email interview. “I told her I wasn’t pregnant and that I needed to go and she then started aggressively telling me I was making the wrong decision and I was going to go to hell. I was really shaken up. The whole experience was really overwhelming and frightening.”

Huston also gave detailed accounts of medical resources they can refer both documented and undocumented women to and mentioned that they have attorneys for Deferred Action for Childhood Arrivals (DACA) recipients.

CPCs can be valuable in allocating funds and supplies to unexpecting parents that have decided to continue the pregnancy. However, the active intervention in the private affairs of individuals by CPCs crosses personal boundaries and does so with financial backing from local and state governments.

Clinics that offer access to safe and affordable abortions do not claim abortion as the only choice, but having options and accurate information allows for individuals to make that personal decision. It is important to make accurate medical information accessible, regardless of the stigma surrounding the issue.