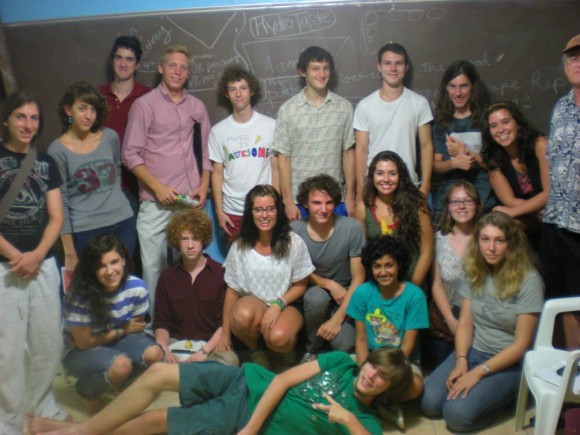 Members of the CGA engage in “angel-winds,” a stretching exercise, at the beginning and end of each meeting.

At 8 p.m. on Monday, Sept. 12, the Council of Green Affairs (CGA) — a group of students passionate about bringing New College closer to environmental sustainability — met in third court lounge to discuss its plans and goals for this year. The CGA, a relatively new subgroup of the New College Student Alliance (NSCA), formed three years ago and is made up of appointed and elected members. This year, it has a decidedly ambitious list of tasks that it hopes to accomplish.

The CGA is preparing a Green Fee Charter so that students can have control over the Green Fee which was created last year. According to second-year student representative Nicholas “Niko” Segal-Wright, the Green Fee will allot NCF about $28,000 per year to use towards environmentally sustainable spending — the money will come in at the end of each semester.

“I think the biggest thing that is guiding my idea of the Green Fee is something that I heard from John Lamby who says to start with conservation and then efficiency and then renewables,” said Segal-Wright. “I think that one thing that we’ve been thinking about since Climate Action ISP is to put in meters to show students how much electricity that they are using. If we combined that with a refund from the school (Oberlin did this) it would be really effective.”

Other ideas that Segal-Wright said the Green Fee could be used for include getting fruit trees and creating a fund that would build up over time to replace equipment with more efficient, environmentally friendly machines.

“In terms of influencing the student body, I want to make the Green Fee come out with a bang,” Segal-Wright further reflected. “I want a gazebo with solar panels on it where people can work outside and charge their electric devices. I want that to be a symbol of the fact that New College is changing.”

The CGA is installing nine square feet of hydroponic equipment in third court lounge which should be in place by Friday, Sept. 15 and hopes to use the hydroponic system to grow tomatoes and basil. Most of the equipment was donated save for a few parts that the CGA bought from Mother’s Urban Garden for $161 at a 15% discount. Hydroponic systems grow produce in a stable, regulated environment and use water rather than soil. They benefit the environment because the water stays in the hydroponic system and can be reused. Thesis student, leader of the CGA and Vice president of the NSCA Johannah Birney said that she believes that it is important to grow food in the heart of campus enmeshed in the bustle of student life. She reflected that the Organic Garden grows delicious food, but hardly anyone makes the journey to Caples where it is located.

The CGA hopes to make it easier for New College students to navigate Sarasota sans cars. Thesis student Krystal McClain is the CGA’s transit representative. She said she hopes to make bus maps with stars on them to help students navigate the SCAT system and to get to specific places. McClain is also organizing a community bike program that she plans to have up and running by the end of the year. The bike program would let students rent bikes out for an entire week by swiping their student I.D. at the bike shop.

Members of the CGA are working to encourage Novocollegians to recycle and proposed at their meeting that they get a Sarasota county recycling official to talk to students about what can be recycled in Sarasota at the next town meeting. Last year, Coca-Cola donated several blue recycling bins to NCF which the CGA painted in an attempt to rid them of their corporate nature — now the CGA is labeling so that students can know what recyclables to place in them.

“I have a tattoo of a recycling sign on my wrist, so we are working on it,” said Birney.

“I love New College and I would never steer something that I love astray so everything that the Council of Green Affairs is doing is out of love and what’s exciting is that there is no such thing as a problem, there are difficult moments, but everything is an opportunity,” she added.