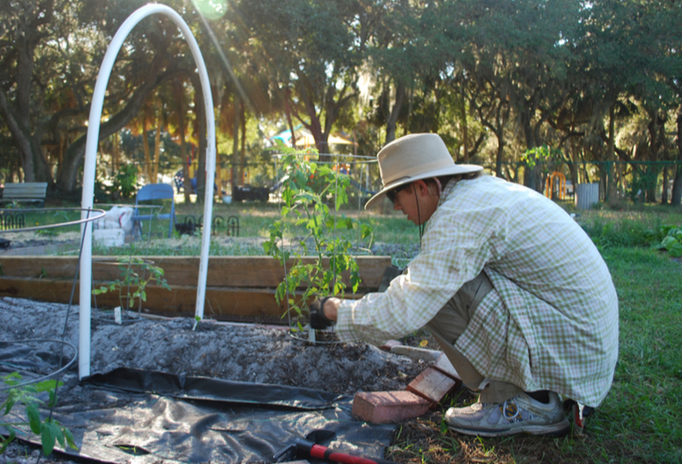 When I got to Orange Blossom Community Garden for my interview with coordinator Barbara Powell-Harris, a boy named Cameron ran up to the gate with the key to let me in. Cameron lives in the neighborhood and comes to the garden all the time, he tells me he likes “just about everything” in there.

Orange Blossom garden is located on Orange Avenue, just east of the Central Cocoanut neighborhood in Newtown and a five minute drive northeast from the Rosemary District.

“We sometimes say that Orange Blossom is where downtown meets Newtown, in a thousand ways,” Barbara said. “It’s where people of both segments of society come together.”

The acre or so of land is cushioned in from the road by Orange Avenue Park, which provides afternoon shade thanks to a dozen old oaks growing there. Sounds of basketball and play float over to the garden as soon as school lets out.

Kids come and go as they please when Barbara is around, which is at least once a day but often much more. Before my interview was halfway through, six or seven other boys ranging from elementary to middle school had come by to hang out.

I realized later that the kids were showing me a live example of  the benefit and the beauty of having a communal space with life growing in it all the time. It’s easy to see, the kids flourish there just as well as the plants and flowers do.

“I have seen the way that community gardens grow community, how they bring a diverse cross-section of a community together that would not necessarily have ever crossed paths any other way,” Barbara explained. “We’ve got people who live in the high-rise condos and people who live in public housing and we’ve got everything in between.”

Barbara tells me more about the people that come to the garden than the garden itself. She knows where they’ve traveled, things they do or did, what they like to grow.

I had the pleasure of meeting Pauline Everett, an elder of the garden. Slow-moving and unassuming, when Barbara told me that she teaches water exercise classes at Arlington Park I could only smile and nod my head in wonder.

“I just have a mustard patch down here,” Pauline said, leading me towards her plot. There were two patches actually, one had grown up and out of the raised bed. Pruning is not in Pauline’s nature. “I figure wherever they come up that’s where they must be happiest.”

Orange Blossom harbors a strong number of the area’s elderly population due to its partnership with Green Path Veteran’s Farm, a fairly new veterans organization.

Neighboring a park, being set in front of Orange Avenue public housing, and having close proximity to Sarasota’s Children First, a head start family program, Orange Blossom Garden has grown strong relationships with kids of all ages.

“There is no way you get a group like this. You could set out to assemble a group that is as diverse around here on a regular basis and you couldn’t do it– I’m convinced–  if there’s not the common denominator of soil and a passion for growing food.”