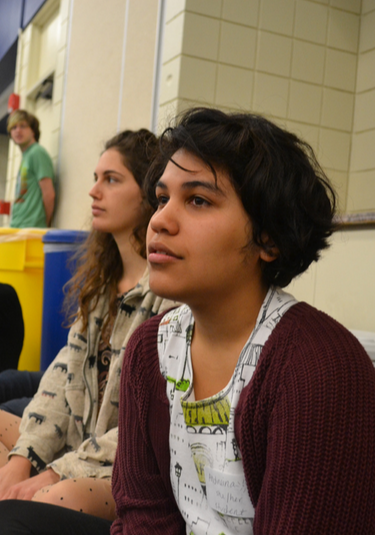 After response to a guest of a student wearing a Nazi costume on campus, the importance of community standards seems more relevant than ever. For those interested in becoming community leaders, expanding personal knowledge and creating dialogue about important issues – both on and off campus – the Independent Study Period (ISP) offers these opportunities. This year, several group ISPs aim to challenge students beyond their traditional academic setting by focusing on the broader implications of shaping communities, creating dialogue and influencing personal growth as global leaders.

ISPs, which take place in January, give students the ability to shape their own education by allotting four weeks to be used for specialized work. Though students can take advantage of this time by creating a personal project that capitalizes on their interests, many are encouraged to join group ISPs.

“This ISP is dependent on having a group of about 14 students come together twice a week for three hours,” Associate Professor of Music Maribeth Clark said.

“In terms of content, it involved introducing students to literature on social justice as a framework for discussions of difference; what is social justice? How does culture kind of replicate itself? How do you make changes in the way you do things if you want something to change?”

This ISP seems especially relevant to Novos, as it aims to encourage discussion without directly calling people out. In addition, this ISP helps develop student leadership skills.

“How do we create a culture on campus that is one of dialogue and conversation? How do you have conversation without creating harm?” Director of First Year Programs Jess Maxon asked.

“I think whenever we talk about this, it speaks to leadership. I think New College students, they’re impressive, right, you’re impressive human beings. You’re intelligent and you’re passionate and this is going to help feed you your leadership skills in terms of dialogue and recognizing and understanding others and having conversations about things that make you uncomfortable.”

The ISP period also allows for outside voices to be heard at New College. For example, the college often pulls in people who are teaching interesting group ISPs, whether they are national professionals or New College alumnus.

These mentors do not get paid huge amounts for taking the time to run these ISPs, so it hugely generous when they do help out. This role as an ISP sponsor shows outside commitment to New College and our community.

“There were some nat-sci students who came back that were doing some microbiology things and they were really excited about what they were doing in graduate school and being able to say ‘I’m doing this in graduate school because I did these things at New College,” Clark said. “These students were looking at the bowel and the microflora in the bowel.

If you’re interested in being an essential member of this group ISP, send an email to mclark@ncf.edu, shernandez@ncf.edu or jmaxon@ncf.edu.

Founder and executive director of Equality Forum and LGBT History Month, Malcolm Lazin is an example of a notable national figure who takes the time to work with Novo Collegians during ISP month. Similarly to the Intergroup Discussion ISP, this project aims to help students develop the skills necessary to facilitate conversation about relevant issues in order to strengthen the community.

“Basically the way he’s approached LGBT history is through a biographical approach, which means he approaches the history through the stories of individuals,” Associate Professor of Sociology and Director of Gender Studies Program Emily Fairchild said.

“This is the chance for students to choose someone whose life experience or whose interest really intersects with theirs and then present on that person and how that person relates to the broader LGBTQ movement.”

In addition, this ISP gives students the opportunity to interact with a key player in the LGBTQ movement and to enhance their knowledge in a field that most Novos are passionate about.

“The Equality Forum started the LGBT History Month in October 11 years ago. Since then, we’ve archived and focused on over 341 historical icons within the LGBTQ movement,” Malcolm Lazin said.

This ISP attempts to share the history of a movement that’s often regarded as more in the moment than historical, ultimately strengthening the community’s knowledge and values.

“I think it will lead to a richer understanding of LGBTQ civil rights as a movement, where it’s been not just what students are feeling here in the moment, right. I think there’s so much history that they don’t get in real life or in classes, or on Tumblr, so I think this will be a really nice compliment to that,” Fairchild said.

“I think what sets it apart is that this is something that a lot of students on campus are really passionate about, but I think it addresses a gap in their familiarity or a gap in their knowledge,” Fairchild said. “Maybe even a gap they don’t know exists until they take it.”

This ISP is projected to have high interest, but there is a cap of about 15 students. If you are interested in this ISP, please email Professor Fairchild at efairchild@ncf.edu before Nov. 22, the Tuesday before Thanksgiving.

“Is Wikipedia biased?” ISP: Add your voice to the conversation

Questioning and contributing on a global scale are essential parts of being an international community leader. This project helps students synthesize a variety of sources and knowledge about a topic while promoting the need to question this existing knowledge.

“The risk and some of the problems that research has shown about Wikipedia is that it is a reflection of the world today, including all of the bias and inequities that exist in the real world,” Humanities Librarian Theresa Burress said.

This ISP relates to the previously mentioned projects, as it helps teach students how to go about presenting information in an appropriate way. By exploring ways to eliminate bias, promoting questioning and stressing the importance of contributing on an international playing field, this ISP is relevant for those who would like to become global leaders.

“It’s about being a global community member; we have the option to customize our community; we’re not as limited by location as previous generations, but at the same time we have to be able to talk with people that are not like us,”  Burress said.

If you are interested in contributing to this ISP, send an email tburress@ncf.edu.

The ISP period can be used in a way that looks beyond typical textbook learning. Rather than sitting down with 20 books and writing a giant paper, students have the option to join group ISPs that make a difference on campus and in the community. Students also have the ability to create their own ISPs that involve the community. Whether students decide to discuss relevant issues in an appropriate manner, learn about civil rights in a way that benefits the campus, question existing sources of knowledge or create their own community-based project, the ISP period can be used to develop leadership skills and take steps in the direction of becoming a global leader.