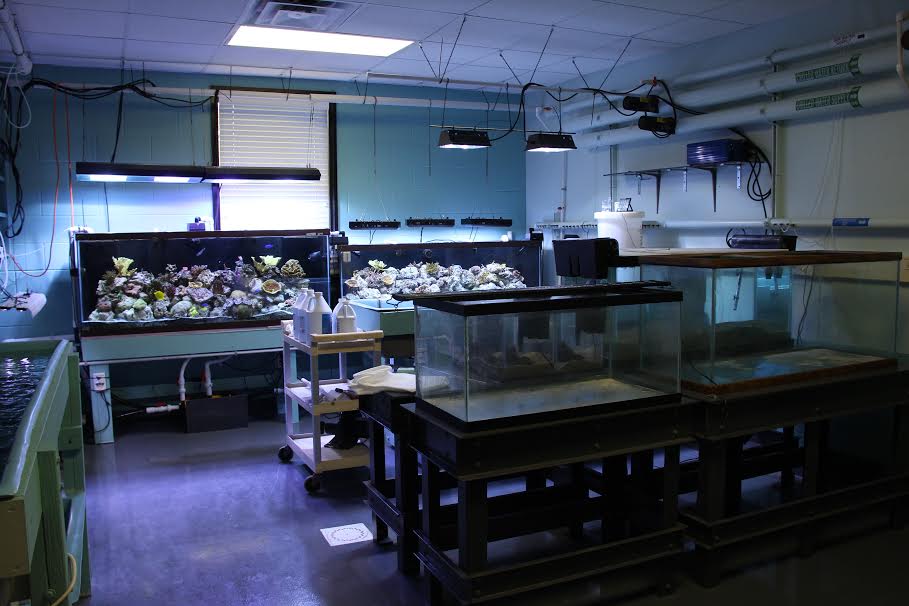 Last spring, a part of Pritzker’s understructure cracked from erosion and collapsed, costing approximately $115,000 in construction. The Pritzker Marine Biology Research Center was built in 2001 with funds generously donated by Jack and Rhoda Pritzker and a matching grant from the state. Holding seven research labs, over 100 aquaria and a natural water filtration system cleverly designed by students, Pritzker is one of the most advanced and complex buildings on campus.
“We were fortunate that the place that fell did not affect the rest of the understructure and that a faculty member noticed the broken piece of the building,” Sandra Gilchrist said, Marine Biology professor and Director of Pritzker. Gilchrist explained that when the building was built, the drains had not been seated and sealed properly and salt water got beneath the floor and began corroding. Strong steel beams have been built into the understructure in order to take the stress off of the slabs which support the building and to prevent this issue from occurring in the future. All new pipes have been installed as well.
After a structural engineer certified that the building was safe for use, construction was to begin in summer and projected to be completed before classes began this semester. However, it was postponed until July so that Push Success, a summer program, could still be held in Pritzker. Due to hard work on the contractor’s part and cooperation from Physical Plant, construction was accomplished earlier than its second estimated finishing time, which was the end of first mod.
“I am very happy with the construction workers; there was a problem with the dust and fumes and it was addressed immediately,” Gilchrist said. David Houghton, facility records and project manager, said in an email interview that there were no issues or extra delays with the employed contractors, Willis A. Smith Construction. He explained that “Willis is one of [New College’s] three continuing services construction management firms.”
Many of the aquariums in Pritzker have been there since 2001. Others have been added over the years, filled with rescued coral from the Keys or fashioned after the reefs of Honduras or even becoming homes for fish straight from the bay. Myakka freshwater and sea grass shallow water systems are just two examples of ecosystems built into the aquariums. Many of these massive aquarium tanks had to be relocated during reconstruction. In fact, every tank, with the exception of the tanks in the Living Ecosystem Teaching and Research Aquarium room (LETRA), had to be removed from each lab for the construction.
“The construction is finished but systems need to be set up and replaced which requires herculean labor,” added Gilchrist. Relocating the tanks was quite a process indeed; the water has to be drained, the drains and troughs removed and, of course, the fish have to be moved around. Gilchrist explained that they “consolidated the organisms that could live together” the best they could or quarantined the fish in large tanks downstairs. Unfortunately, some of the animals did not survive due to stress, age or other causes.
The construction in Pritzker affected various areas of activity. Gilchrist and Professor Frank Alcock both had to relocate their classes out of the Pritzker labs to allow for construction to finish. Clubs such as the Sarasota Aquarium Club, a local club which has held meetings in Pritzker for about nine years, and the Origami Club were inconvenienced by this construction. Hands on research in Pritzker has been delayed as rooms are laid with a new water resistant laminate flooring and LETRA is used for aquarium storage. Thesis students face issues with a postponement of certain research work and activity in the Pritzker labs.
“Since I work at Pritzker over the summer, I probably would have started my research then but I wasn’t able to because of all of the construction, I couldn’t order the mantis shrimp I need for research,” Rob Manely said, a thesis student pursuing an AOC in Marine Biology. Manely is focusing his thesis on Mantis shrimp which are “apex predators” with one of the most advanced eye systems in the animal world, enabling them to see twelve different colors, while humans see only three.
Manely also assisted with the manual labor of moving the heavy acrylic fish tanks out of the labs and finding a place for them to wait out the construction. “We moved all of the extra tanks downstairs to the storage area and all the existing tanks into LETRA,” Manely said. “Part of it took a week until we hired a moving company to come in and help us move the rest of the aquariums,” he added.
Despite the various issues caused by the construction in Pritzker, Environmental Science staff and students are making the best of it. Once the tanks are moved back into the labs and the systems are running again, there are plans to have some of the fish replaced according to faculty and student needs and preferences. Several of the empty tanks can be used for ISP purposes as well as any other projects incorporating marine life.
The building’s layout was also given a chance to change for the better as the student lab and the teachers’ lab switched rooms to allow easier accessibility to students and a quieter environment for Professor Jayne Gardiner’s sensory research. “We also took the opportunity to restructure rockwork to create a better habitat for the animals,” Gilchrist said. “It was a blessing in disguise.”