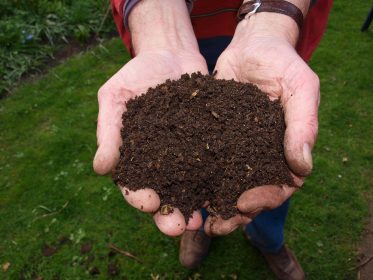 With goals to help reduce waste on campus, first-year Isabella Chandler and third-year (as well as Catalyst staff writer) Ky Miller are the TAs for the compost tutorial. Part of their weekly routine involves collecting food scraps.

“[We also] teach students about how composting works as well as some science behind it,” Chandler said.

Compost is a mild, slow release, natural fertilizer that encourages beneficial bacteria and fungi that break down organic matter to create nutrient-filled soil which improves plant growth. From the food scraps collected, the fertilizer is used for the campus gardens and food forest. It is a way to reduce chemical fertilizers and carbon footprints from landfills.

Chandler grew up composting and joined the tutorial to be more involved on campus.

“I grew up in main and lived on a family farm [where] I had done a lot of composting with my grandfather, Chandler said. “When I moved out here I wanted to continue to do that and get more integrated with the community here,” Chandler said.

Anyone and everyone is welcomed.

“We have eight to nine students that attend it weekly and everybody is just vibing,” Chandler said. “They are really ready to go out and learn new things and make a difference in their community.”The compost TA is funded through the Council of Green Affairs and is paid minimum wage. Chandler is starting a group called the The Sunrise Strike Movement aimed to fight against climate change. Students who are passionate about the environment and interested in joining the club can contact Chandler (Isabella.chander19@ncf.edu).