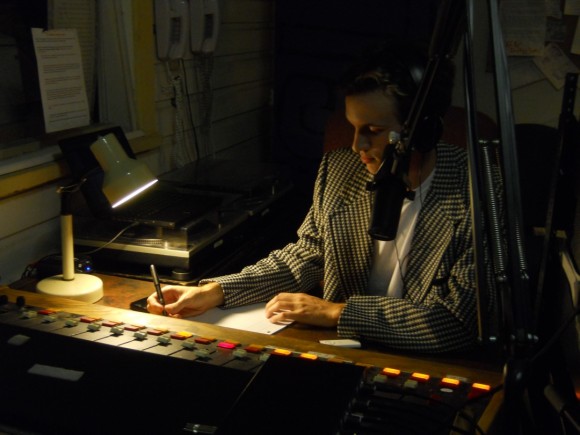 WSLR, a Sarasota community radio station, plans to move from is current location, 3708 Royal Palm Ave. to 525 Kumquat Ct. at the edge of the Rosemary District. The new location is three and a quarter miles away from New College, more than two miles farther than its Royal Palm location. According to WSLR Station Manager and one of the WSLR founders Arlene Sweeting, the Kumquat site offers more space, a more visible location and the chance to broadcast live performances. “We’re very excited about the move,” Sweeting said.

According to Sweeting, who has been working at WSLR since it’s inception five years ago, there are a number of reasons for the move. One reason is that the station is growing out of its current space. The station is planning to share the new building space with another nonprofit organization called the Peace Education and Action Center.

In their new space, WSLR will be able to expand their studio and have live performances. “We’ve never been able to be very visible because of zoning laws,” Sweeting said. The station will also able to do more sound proofing than they currently have on Royal Palm.

“We are hoping to evolve into a community radio center and that the move will strengthen our relationship with New College,” Sweeting said. “When we were looking we considered how far about the new station would be from the school. We wouldn’t go anywhere south of Main St.”  According to Sweeting, the new station location is within biking distance and close to the bus line.

In an interview with the Catalyst, second-year and WSLR Radio representative Sarah McKnight described the move by saying, “I think it’ll be beneficial for them to be in a better space. …On the negative side, it is a little bit further form New College since they are moving downtown.” McKnight has been the radio representative since last May.

“Obviously it’s important for WSLR to have a larger venue where they can do more,” Morell continued. “But I think it’s a detriment to one of the goals of having greater New College involvement with the station. It’s a lot less accessible by bike and a lot of the shows are at night. Route 41 isn’t the safest road for pedestrian traffic, especially at night. Having students travel farther along 41 at night worries me and it could potentially reduce interest if students aren’t willing to make the trip.”

New College has had strong connection with WSLR since its creation. Before last semester, the New College Student Alliance, NCSA, held WSLR’s FCC license. Last semester, a committee was formed by the NCSA to talk about transferring the license to WSLR and any conditions that would go along with the transfer. The committee was chaired by former New College representative to the WSLR Board of Directors Isabel Maioriello-Gallus (’06) and met once.

“She set up a meeting for us all to talk about it and we all said that we weren’t able to make the meeting,” Morell said. “But she had it anyway and with Arlene and Dave [Beaton] which wasn’t what we had already discussed. The three of them decided about the language that would be used in the license transfer.” After the meeting, the NCSA presented and passed a motion at the Towne Meeting to transfer the WSLR FCC license from the NCSA to WSLR.

“I spoke out very vehemently against the motion at the meeting because I don’t think the New College interests have really been served at the meeting,” Morell explained. “I wanted more of a discussion to take place before we did something so monumental.”

In the WSLR-NCSA Agreement to Transfer LPFM License, the number four stipulation states, “WSLR will remain in a geographical are that can be easily accessed by students.”

“I worry about the station moving because even right now there are very few New College students who volunteer here,” Morell continued. “I’ve come in and done shows that were 1-3 in the morning. If my only way to get here was on a bike, I wouldn’t be doing that. …It just spells disaster to have somebody biking downtown late at night.” Morell said.

“I hope [the move] doesn’t effect participation,” McKnight continued. “Most students know how to use the bus and students who bike to where they are now can probably make the next couple of blocks down. …As long as we are consistent with staying involved with the radio station, I don’t feel like we’ll ever get pushed out.”

“I hope more New College students are more aware of WSLR and volunteer at the station if they’re interested in music, journalism or any type of broadcasting because it’s great hands on experience,” Morell concluded.

On Sept. 28 there will be a group meeting for students interested in working with WSLR from 5:30-7 p.m. in HCL 7. WSLR will also be holding their 5th Annual Birthday Bash on Oct. 23 with five plugged and five unplugged artists playing in their open lot.