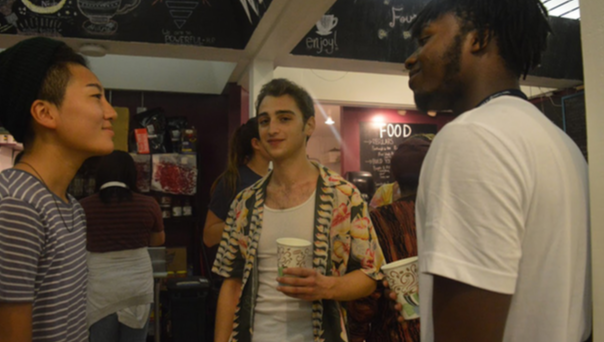 A couch and a microphone faced the room, Christmas lights were strung across the walls while one large rainbow colored pride flag and one pink, blue and white trans pride flag hung from the ceiling. The couch faced rows of chairs that were quickly filled while some stood by the door and others peered out from the screen doors. A loyal audience remained, and volunteers kept on coming up to speak, until well after when it was originally set to finish at 9 p.m. with a turnout of roughly sixty attendees including current students, alums and Sarasota residents.

The Coming Out Monologues took place on a Friday night after hours at the Four Winds Cafe on Nov. 4 at 7 p.m. The event was organized by Queery, a club that is focused on acting as a safe space for LGBT college students. In the past, several clubs focused on queer students have come and gone at New College with Queery, organized last year, as the latest organization.

“We still need these spaces and we still need these to be able to just hang out with people who have similar experiences than us,” second-year and Queery member Elliot Gardiner said. “It’s still important to have these safe spaces and these communities to throw events like these because, without Queery, I don’t think this would have happened.

“We were trying to think of an event to do and we know that people who had attending [the Coming Out Monologues] two years ago thought that it was really, really cool, especially for people who had been sharing stories that they had never shared before and it was a really important and cathartic thing to talk about in a space that’s safe, where you are surrounded by peers who have similar feelings,” Gardiner continued.

Attendants could enter a raffle for a free meal and drink from the Four Winds and tickets to ALSO Youth’s 7th Annual Turkey Trot and the Equality Florida Suncoast Celebration. The event was also catered with vegetarian food from the beloved Green Bean Coffee House. Counseling and Wellness Center (CWC) counselor Duane Khan was in attendance as well as the New College Student Alliance (NCSA) Vice President of Diversity and Inclusion (VPDI) and third-year student Leen Al-Fatafta.

“I think it’s important to support the queer population on campus,” Khan said. “The stigma is real, the things that people interpret as dangerous are actually still dangerous in our community and research has shown that a supportive community, as an alternative to societal negative constructs, is one of the most healing things that you can have.”

Before the speakers could come up, Queery members went over the community guidelines of the event. Attendants were told to be mindful of the roles they were taking as either speaker or listener as well as protocol for content warning their discussion before beginning and only applauding or snapping after the speaker was finished.

This event also occurred after third-year student Kevin Jensen, “came out” on the forum as a straight, white male on Oct. 27. A Community Meeting was held on Nov. 6 from 4:00 to 6:00 p.m. where students met with Jensen to discuss the offensive nature of “coming out” as his privileged identifies.

“It gives a space for the LGBT community on campus to actually tell their stories and be visible, instead of invisible,” second-year Jason D’Amours said. “So many people came. We didn’t think this many people would come. We’ve already talked about hosting one next semester.”

Queery meets every Tuesday at 6 p.m. in the Gender and Diversity Center (GDC).