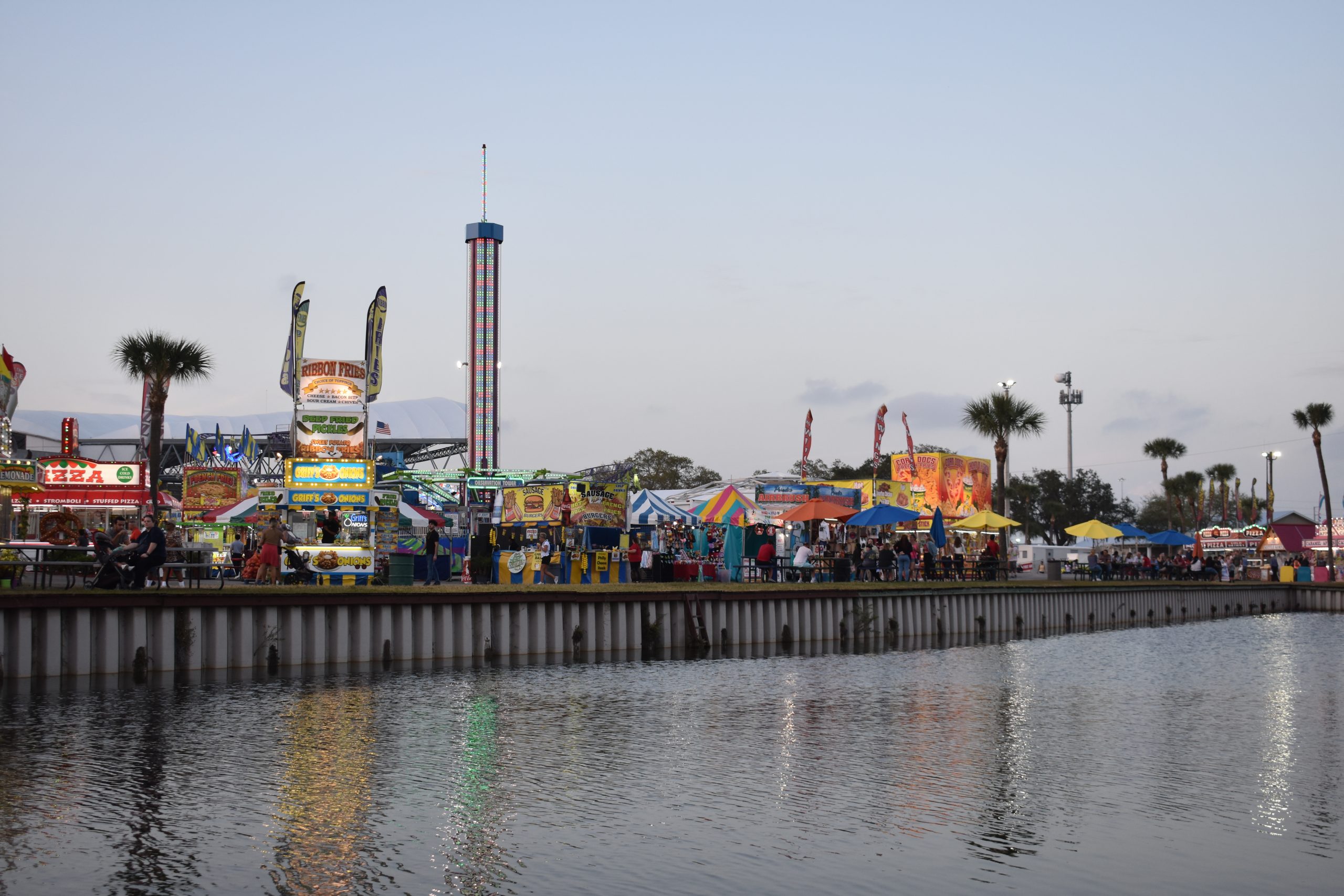 As Jessie “Monkeyman” Moore’s elderly capuchin monkey sucked its wrinkly grey pinky toe without a care in the world, Moore somberly imparted that he is the last true organ grinder in the United States of America. It’s college night at the Florida State Fair, and Moore and Louie, the capuchin, entertain curious passersby using a genuine 20-string street organ. The organ is a rare sight in 2020, similar to those used by famed organ grinders of centuries past.

The State Fair is famous for strange curiosities such as the “USA’s Largest Traveling Ferris Wheel” and “Monkeyman” Moore’s organ grinding gig.

Moore has been working at the state fair for six years as an independent entertainer. He sees himself carrying the legacy of organ grinders generations before him. Organ grinding is an antiquated street entertainment practice dating back to the late 19th century in which the ‘grinder,’ or player, turns a crank on the side of a small wooden organ on wheels. Capuchin monkeys were favored as street companions for their nimble opposable thumbs, which held coin collection cups and enamored listeners.

Louie is one of 15 monkeys Moore owns, many of which Moore said had been confiscated and rehomed from exotic animal sellers or illegal pet owners.

The ubiquitous use of exotic animals at state fairs has garnered criticism in recent years, but Moore emphasized that his work is “turning the tide of animal exploitation towards animal appreciation.”

Moore’s goal has been to spread his love of capuchins to others by traveling around the country organ grinding and educating the public about capuchins and other primates.

“These monkeys share 96 percent of our DNA—they’re little individuals just like you and I and deserve to be treated like us, too” Moore smiled as Louie nibbled his bejeweled ear.

Moore told me he planned to continue traveling and organ grinding with his monkeys “‘til [he] can’t grind no more.”

Another fair worker that travels around the U.S. for work is Ariel Houten, who works for the ice cream chain Creamy Rich. She looked fresh out of college, herself, with a sparkling medusa piercing and jubilant demeanor.

“I can do anything– I don’t work to vacation, work is my vacation!” Houten grinned.

Meeting out-of-state workers from other booths is one of Houten’s favorite parts of working the fair; she met a man from Alaska last week and said they talked for hours on end outside the Creamy Rich booth.

“I love the weekdays because they’re slow and I can just talk to folks—and college night is nice since college kids don’t have money for this stuff, anyway, so I just relax and eat the pineapple whip.”

The cold, sweet pineapple treat was a draw for many at the fair this year—especially USF sophomore Diana Balsamo and her girlfriend, Madison Grabow.

As rollercoasters screamed above us, Balsamo said the sprawling, raucous fair is slower than the ones she’s used to in her home state of North Carolina, but as a lifelong vegan she delighted in discovering a new food that stood apart from the typical greasy, animal-based staples typical of state fairs. The couple took advantage of Thursday’s post-5 p.m. free admission for college students to have a date night, sharing the vegan dessert and people-watching beneath the 155-foot tall Midway Sky Eye.

While the sun sank beneath the rows of colorful food stands and spinning rides, I spotted Moore and Louie trundling towards the college crowds once again, the organ’s tunes fading into the roar of another long night at the Florida State Fair.