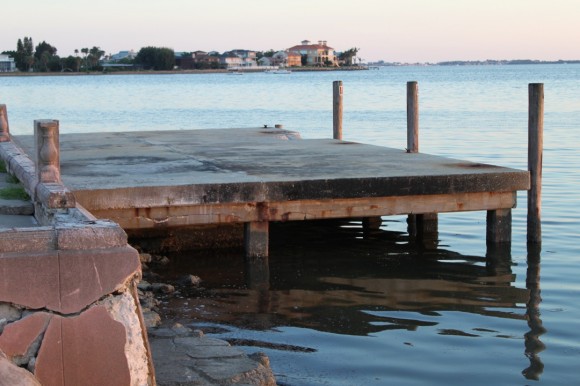 During an inspection of the College Hall seawall last month, engineers discovered structural damage to the Col- lege Hall dock and deemed it in “imminent danger of collapse.”

“Basically what has happened structurally is that the steel rebar that’s in the concrete beams underneath the platform have all been exposed to the salt wa- ter,” New College Senior Architect Jack Whelan explained.

“Once they’re exposed to the salt water they expand and they rust,” he said. “And as they rust, they expand, they crack the concrete and basically the beam fails. And that’s happened on every single one of the beams.”

In light of the damage, the dock has been fenced off to prevent students, faculty and others from setting foot on it until it can be fixed or replaced. The dock’s structural weaknesses will be ad- dressed as part of the ongoing seawall restoration project.

“We have a project right now under design to look at either restoring or replacing the sea wall and we’re in the middle of evaluating it and having our consultants provide us with some recom- mendations as how to fix it or replace it,” Whelan told the Catalyst. While a firm time frame for the seawall restoration and dock replacement has yet to be set, “it’s a project that will probably start this time next year.”