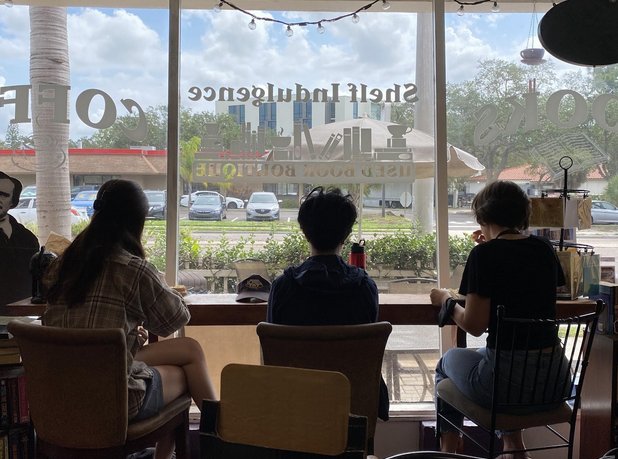 A row of patrons enjoy the view of Tamiami trail from their seats at the Shelf Indulgence hightops. All photos courtesy of Mark McDermott.

College is costly, but a running start in the morning doesn’t have to be. Sarasota is dotted with a variety of local businesses ranging from curio shops to cafes. Many of these businesses are just within reach of the New College campus, given one doesn’t mind using their legs or riding the Sarasota County Area Transit (SCAT) bus, which is free for New College staff & students. A critical piece of information for any college student is where the closest and cheapest cup of coffee can be found, of which there are three near campus: Mama G’s Coffee Bakery, Shelf Indulgence Used Book Cafe and Jack’s Donuts of Florida.

Established in 2015, Mama G’s is an authentic family-run German bakery about a five minute walk north from the Sudakoff Conference Center. Since the store’s inception, Mama G’s has seen heavy foot traffic from college students.

With the generous discount provided by presenting a college ID, a refillable mug of coffee costs as little as $1.44. However, the greatest strength of Mama G’s comes from the second half of its humble title: Mama G’s offers some of the best pastries you can find in Sarasota—covering the whole gamut from bagels and tartlets to strudels and croissants.

Mama G’s is open from 6 a.m. – 4 p.m. every day of the week save for Sunday, providing a reliable time window to kick off your day or secure a midday pick-me-up.

Described by Shelf Indulgence Used Book Cafe employee and interviewee River Novalsky, Shelf is boldly “a collection of whatever we want it to be”—a used bookstore and coffee shop in the same breath, and an exemplar in atmosphere.

Shelf is easily accessible by SCAT, but takes about an hour on foot. For this reason, the hike may be a dealbreaker if one isn’t able to secure a seat on SCAT or drive down themselves.

However—for those who’re able to make the pilgrimage from campus to Shelf—one will find an inviting atmosphere and clientele adjacent to New College’s own.

The average price range for products at Shelf are roughly $7 to $9, with $10 being the utmost—making it the priciest of the three locations, but the cost is very well worth it; Shelf prides itself on its cafe offerings including coffee, tea, sandwiches—including vegan and vegetarian options—and wraps. If one is by chance stuck on campus, Shelf has delivery supported by Uber Eats and Doordash.

“It’s not just a store, it’s not just a cafe […] It’s almost an off-campus Four Winds,” Novalsky said. Besides a cozy cup of coffee coupled with brunch, one is able to walk out of the store with a used book – with the Shelf catalog covering a wide range of genres and subjects.

Shelf Indulgence is open from 10 a.m. to 7 p.m. every day of the week except Sunday, in which Shelf closes at 5 p.m. instead.

Having opened a locally-owned location in 2022, Jack’s Donuts of Florida has already carved out a local niche through its innovation, ambition, professionalism and some fantastic donuts.

Jack’s Donuts isn’t far from Shelf Indulgence location-wise, and is similarly best reached by bus. Despite belonging to a chain, Jack’s Donuts of Florida is a private franchise managed by Andrea Ronchini.

“I’m the proudest of happy customers,” Ronchini said. Though relatively new, Jack’s Donuts aims to expand outward. Besides dealing in its sprawling variety of titular donuts, Jack’s Donuts also carries its own brand of coffee, its own brand of energy drinks and—as of this article’s publication—is currently expanding into breakfast and lunch sandwiches. An additional option for pet owners is a selection of “dog cookies,” for their pets.