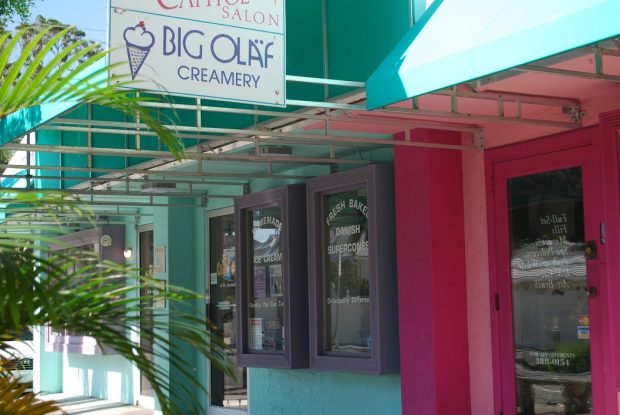 In 1984, President Ronald Reagan dubbed July National Ice Cream month. NASA recently proclaimed July of this year to be the hottest month on record. To elaborate, this July globally experienced the highest heat ever to be documented since records began in the late 1800’s. What now, Mr. Trump?

Actually, July is the tenth month in a row to hit record heat. This article has probably provoked the question of how I can talk about ice cream when climate change is out there happening. Disclaimer: it’s going to get darker before it gets lighter. Ice cream will take on a whole new level of guilty pleasure. (For breezier content, skip to the end of this article.)

Climate change science has a number of proven phenomenons, all of which are terrifying. There’s sea-level rise (bye, Florida); the greenhouse effect where gases trap heat and taint sunsets; and the albedo feedback effect where rising temperatures melt arctic glaciers which dwindles the surface area of white, light-reflecting land, giving way to greener land that absorbs heat and speeds up the initial process. Phew.

Ok, here is where ice cream gets a serious unethical stamp. Cattle belching, which releases the greenhouse gas methane, and the addition of fertilizers to soil makes up 65 percent of agriculture emissions worldwide. Now for the cherry on top: 10 percent of all milk produced by U.S. dairy farmers goes into ice cream.

I don’t want ice cream to taste like tears. So, I sought out loopholes in the destructive consumer-system to achieve a more eco-friendly ice cream cone. Through my research and moral growing pains, I have discovered three ways to enjoy ice cream relatively guilt-free.

The first and, in my opinion, the best way to acquire ethical ice cream is to eat local. Bam. This means ditch the Haagen-Daas, Cold Stone and Dairy Queen.

Anyone who has studied climate science will say numbers do not hold the full truth. Food requires an extensive amount of transportation but transportation emissions are calculated into the energy sector, the sector with the highest greenhouse gas emissions. Eating at local joints avoids much of the foggy (or smoggy) impact that mass transportation has on climate change.

Fortunately, the Sunshine State supplies hot enough weather to support the demand for ice cream year round, resulting in a ton of local and family-owned ice cream shops. There is one ice cream in Sarasota that is local to the core and that is Big Olaf.

All Big Olaf ice cream is handmade in Sarasota at the creamery location off Cattleman Rd. Big Olaf has been churning since 1982 when Dennis Yoder decided to bless the world with natural, wholesome ice cream made Amish-style. Since then, Big Olaf has invented over 47 flavors and expanded into several franchises in the area.

There are Big Olaf ice cream parlors in St. Armand’s Circle, on the corner of Bahia Vista and Beneva, in Siesta Key and off Main Street in Bradenton. Even Detwiler’s Farm Market scoops up Big Olaf ice cream at both their Sarasota locations for $1.38 a cone.

The closest one to campus is the St. Armand’s location. Dave Tesar has been store owner for 30 years and has kept the place old fashioned enough to fit his cash only policy. He’s decorated the walls with an impressive number of weather radar maps and blown up, old photos of kids feeding a large doberman from an ice cream cone at the very same parlor. I asked Tesar what makes Big Olaf special and here’s what he said:

“We use the big waffle cone here, we were the people that introduced the waffle cone to the state of Florida back in ‘82. All the ice cream is locally made, it’s made by our Amish community and they use fresh ingredients, pure ingredients as much as possible.

So there you have it. Other local shops include the Frosted Mango (which sells the Florida-based ice cream brand Working Cow and buys ingredients for smoothies from local farms) and Siesta Key’s Orange Octopus (ice cream made on site!).

This subheading may seem to contradict everything said above. Well it doesn’t and that’s because Ben & Jerry’s is one woke ice cream company. They have long been an advocate for environmental justice, partnering with organizations such as Avaaz and 350.org to booster the movement.

The Ben & Jerry’s website explains a few actions they’ve taken to counter climate change including “working with our farmers to reduce methane emissions from farms, lead[ing] the change to a cleaner, greener freezer in the United States and buil[ding] the Chunkinator at our Netherlands factory which helps power the factory from ice cream bi-products.”

“It was chunky, good chunky, and I couldn’t discern that there wasn’t any dairy in it because it was so creamy,” second-year Andreina Carrasquero commented on the PB & Cookies. Ben & Jerry’s is now selling cartons of vegan ice cream in grocery stores.

Vegan ice cream is an obvious choice for the consumer trying to cut down on their carbon footprint. However, there are reasons veganism can be out of reach. For some, it is a health, financial and/or cultural concern. For others, it’s just cheese. For me, it’s ice cream.

I adore ice cream. I can’t change that – not even by writing a morbid article about climate change and the dairy industry. That said, I tried a number of ice cream alternatives and was pleased with all of them.

One of these options is frozen custard, also known as French ice cream. Custard differs from ice cream mainly in its use of egg yolk as a main ingredient. Sounds weird, I know. It’s delicious and the taste tends to be richer than ice cream and it’s consistency thicker.

Between the two, frozen custard is a lesser evil. There are two major reasons for this. The first is that the poultry industry has a smaller impact on the environment compared to the dairy industry. An example of this becomes clear when one considers the amount of land required to raise chickens versus cattle. The second reason is health-related. Ice cream has almost three times the fat content of custard. Convinced? I was.

Interestingly, there are a lot of frozen custard shops in the area. Sweet Berries, Culver’s and Freddy’s to name a few. But the place I would recommend is S’macks Burgers and Shakes.

Located on the corner of Bee Ridge and Shade, S’macks partners with several farms in the area to provide their customers with Farm to Fork foods. A family-run farm in Myakka called Dakin Dairy supplies S’macks with its basic custard ingredients. Their custard is spun fresh every day.

Smack’s has what’s called a “Concrete,” a serving of custard that can be mixed with a topping on the board. It’s named so because it is made so thick they can give it to you upside down. Third-year Kasia Wake’s usual at S’macks is a Concrete with Biscoff cookie spread which has “like, a gingerbread spice flavor.”

Sorbet and sherbet are good store-bought ice cream alternatives if chocolate cravings need not be satisfied. I considered adding popsicles to the list but the individually-wrapped treats fall short of my ethical calculations.

A local alternative is the dairy-free coconut ice cream available at the Frozen Mango. I brought third-year Annie Rosenblum along to try it out. “It’s creamy and refreshing, it tastes good by itself but would be tasty on a cone too,” she concluded.

It is no longer a secret that climate change exists and the human footprint is kicking it into gear. What may still be secret is that humans can effectively counteract this process.

It is easy to feel helpless in the face of the planet’s destruction but there are productive ways to react to unfortunate facts, including those of climate change. They don’t have to be extreme lifestyle changes either.

The three steps to an ethical ice cream cone translate into three ways to be an ethical consumer. Buy local, find a brand with a conscience, try alternative products.

A wise Ben and a wise Jerry once said  “if it’s melted, it’s ruined. It’s true for ice cream, and it’s true for the planet.” – Ben and Jerry’s website.