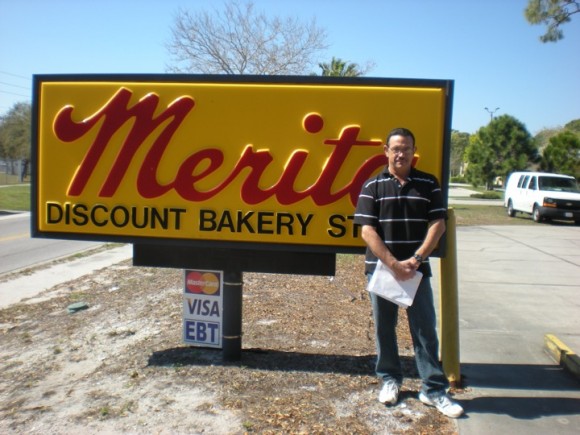 Mike Evans is an employee of Merita Discount Bakery

The Merita Bread Company started in 1901 as the Highland Bakery in Birmingham, Alabama — with a one horse-and-wagon route, a retail storefront and a dedication to baking quality bread. According to legend, the company received the MERIT-A award again and again for its high quality bread that it started to print MERIT-A on its packages. Mistakenly, the hyphen wasn’t printed on the packages and the company has been known as Merita Breads since.             Merita Discount Bakery, a purveyor of discount Merita Bread, is on Tellevast road — a hop, skip and jump away from campus. The store is non-de-script with white walls, fluorescent lights and metal shelves. But, people don’t come to Merita Disount Bakery for its ambience — they come to buy bread, baked goods and treats at budget friendly prices.

Mike Evans, who works for the bakery, said that the store sometimes runs a sale and sells four loaves of bread for just three dollars. On any given day, one can walk into the store and pick up a loaf of Merita whole wheat bread on black mark clearance for .89 cents, Nature Pride bread for $1.59, or two loaves of Merita Swirl Cinnamon Raison bread for $4.34. The store sells hostess products, which it buys from a vender, including zebra cakes, Twinkies, muffins, Zingers, Snowballs and cupcakes. One can buy five of these snacks for $3.40 or just one for .80 cents.

The bakery gets most of its bread from the return from truck driver’s routes. Its employees sort through the bread and pick out loaves that haven’t expired yet and then sell them to the public and restauranteurs, whom it receives most of its business from. The bakery donates the food that it can no longer sell to area charities and churches or sells it to hog farmers.

“A lot of people are shopping a lot more at discount stores to save money,” Evans said. He further said that in light of difficult economic times, the store’s clientele has become more price conscious.