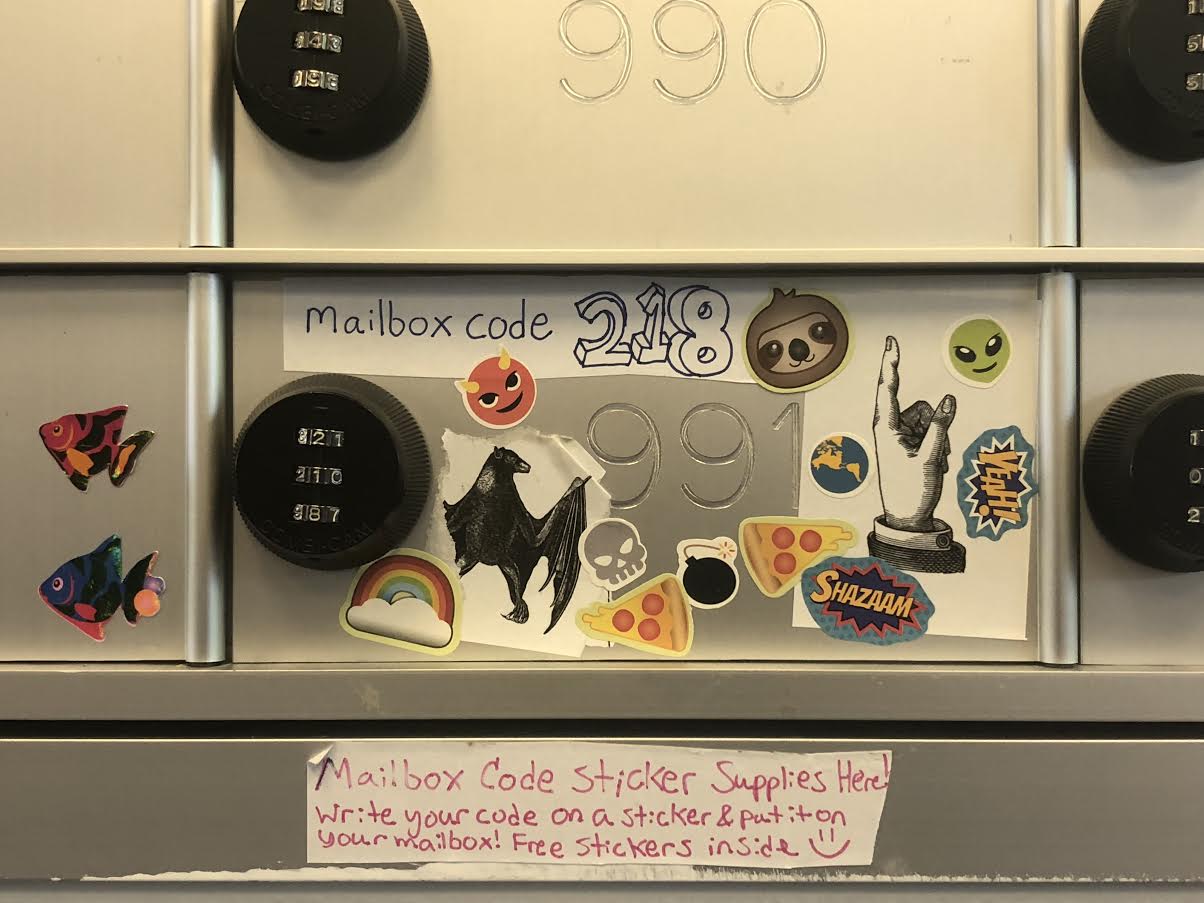 Cait Matthews/Catalyst "Write your code on a sticker and put it on your mailbox! Free stickers inside," reads a note from Unlock the Box Party organizer, third-year Lola Whitworth.

Student Admissions Representatives (STARs) on campus used to be proud to showcase the fact that most students participated in a tradition of keeping their mailboxes unlocked. This feature was attractive to newcomers. It reflected a campus culture of trust, honesty and communal behavior.

In May of this year, an email was sent out from Associate Vice President of Finance Kimberly Bendickson, detailing a policy change regarding student mailboxes. Students were encouraged to lock their mailboxes and were told they would receive new codes to the locks near the beginning of the 2018-2019 school year. According to the email, the changes were made to increase safety and security on campus.

“The tragedies in recent months in schools and other public places is a sharp reminder to us that the area of safety and security needs to be constantly reviewed and improved,” the email noted.

For many students, this sudden announcement came as a shock, due to the lack of student input.

Giulia Heyward (‘14), a former student postal worker, stated she was working in the mailroom last year when the conversation was first brought up. Board of Trustees Representative Barbara Stier first mentioned the mailboxes as a security concern, causing Bendickson and others in the Business Office to pursue a policy change in the following weeks.

“It didn’t necessarily matter what was being said in defense,” Heyward said. “Administration had an idea of what they wanted, and they weren’t going to change their minds about it. All of the people that made the decision about the mailboxes being locked are people that don’t interact with the student body.”

According to Senior Postal Manager David Steves, any time they receive identifiably important mail, such as a prescription or a check, the parcels are held in the mailroom — not placed in students’ individual boxes —in order to be sure that they reach their intended recipients.

“There has never been a legitimate instance in school record, as well as the campus police system, where a student has stolen something from someone’s mailbox,” Heyward assured.

There were only two recent incidents cited as harmful by the policy changers: an unattended child tampering with mail and a mix-up with a prescription that did not involve the New College postal services.

Steves noted that the locks for the boxes in the Old Mail Room often did not work correctly from 1960 to 2010. On a Facebook thread, alumni commented that in the past some boxes did not even have doors. New metal mailboxes were installed at the entrance of Hamilton “Ham” Center in 2010, but the tradition of leaving mailboxes unlocked largely carried on.

“I wouldn’t say I was one that used the openness of the mailboxes very often, but it was a great way to pass things from one person to another, even if you didn’t know them,” third-year Rivka Romano said.

Additionally, the policy change has created new work for the mailroom workers. Over the summer Steves had to go through each mailbox to dial in the old codes and then go back through to create new combinations. The entire process took him 23 work hours, as there are over a thousand mailboxes.

The workers have also been told to lock each mailbox that is left unlocked every time they deliver mail. According to Steves, combinations will be changed for the corresponding mailboxes of new graduates.

To protest the policy change, third-year Lola Whitworth organized an event known on Facebook as the “Unlock the Box Party.” Held on Saturday, Sept. 1, the party’s intention was to encourage students to decorate their mailboxes and include corresponding three-digit-passcodes, an act that essentially makes the policy change useless.

According to Steves, the best way to get around the policy change could be to go to the President or Student Affairs and say, “I’m box #___, I’ll sign a waiver that says if anyone steals something, I’m personally responsible for not locking my box.”

“The reason why people go to New College is because of the professors and the culture that the students create,” Heyward said. “The mailboxes, at the end of the day, aren’t a huge deal, and there are ways to get around it, but this is symptomatic of a larger issue.”