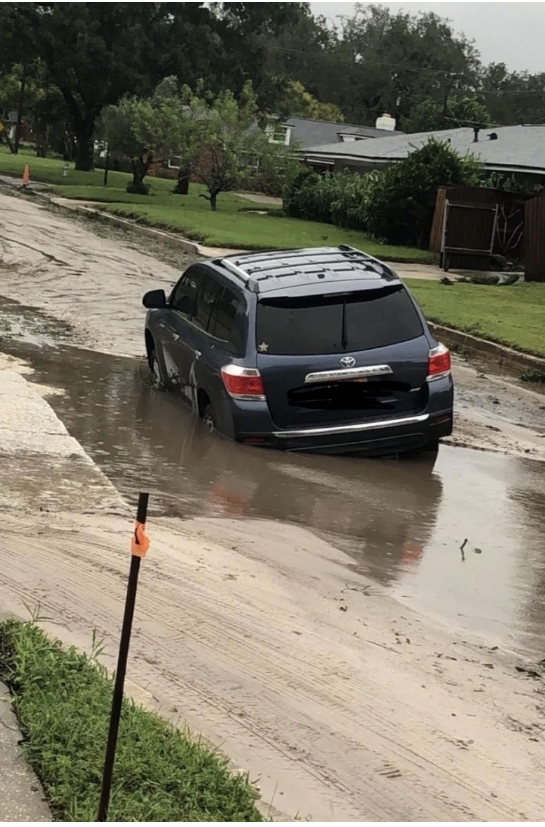 A car submerged in mud in Maitland, Florida, after Hurricane Ian. (Photo credit to Matt Kornblum.)

While much of Southwest Florida recovers from the devastating impact of Hurricane Ian, central Florida is grappling with severe flooding.The hurricane, which touched down in central Florida on the morning of Sept. 29, brought with it high winds and about 20 inches of rain. One of the most devastating impacts on the region, however, is the flooding of the area near the Econlockhatchee river, which flooded several apartment complexes, including Arden Villas near the University of Central Florida (UCF).

The National Guard came out to assist stranded residents, many who carried their pets and belongings out of several feet of water on canoes and inflatable mattresses. UCF restarted classes on Tuesday, Oct 4, a move that has been criticized by several as hundreds of students have been directly impacted by the flooding in the area. As a result, hundreds of UCF students have been seeking housing, academic and mental health services from the University.

The East Orlando area isn’t the only central Florida region recovering from flooding induced by Hurricane Ian. In Altamonte Springs, a city in Seminole county, flooding has devastated several neighborhoods near the Little Wekiva river. Homes are flooded with waist-deep water, causing many residents to retrieve what belongings they could with kayaks.

Central Florida resident Autumn Day sheltered in Altamonte Springs, and described her experience: “The house I stayed at is in a neighborhood kind of on a hill. Our house is the highest house so flooding did not affect us at all, but around the corner, there were multiple feet of water because it was in a lower dip. We saw people canoeing down the road to save their stuff from their homes.”
Other areas in central Florida impacted by flooding are Sanford and Deland near the St. John’s River, as well as Geneva. Flooding is expected to decrease as the week progresses, though folks passing through the area should remain on high alert.