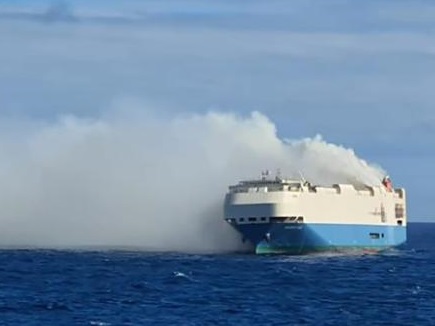 The Felicity Ace is 656 feet long and carrying over 17,000 metric tons of material, and now sits floating and abandoned in the Atlantic Ocean. Photo courtesy of Flickr.

On Feb. 16, the Felicity Ace cargo ship, capable of carrying over 17,000 metric tons, caught fire in the middle of the Atlantic Ocean. The ship departed from Emden, Germany, with a planned route to Davisville, Rhode Island. The fire broke out while the ship and its crew were sailing about 90 nautical miles away from the Portuguese region of Azores, an archipelago consisting of nine volcanic islands.

Aboard the 656 foot-long ship, there were a total of 22 crew members on board, all of whom abandoned the ship following the fire spreading to the ship’s cargo hold. According to the Portuguese Navy, all members were safely rescued and subsequently taken to a local hotel. This effort was orchestrated by the Ponta Delgada Maritime Search and Rescue Coordination Center. Alongside the crew members, the Felicity Ace was carrying hundreds and hundreds of luxury cars, ranging from Porsches to Volkswagens. Porsche and Volkswagen have both confirmed that customers are awaiting the arrival of vehicles onboard the ship.

Five days following the start of the fire, captain João Mendes Cabeças told Lusa (a Portuguese news agency), that the fire had largely diminished in size due to a lack of materials for the fire to eat at.

The Felicity Ace itself is registered to the country of Panama, but is operated by the Japanese shipping line Mitsui O.S.K Lines (MOL). The owner of MOL announced that two tugboats from Gibraltar arrived on the scene on Feb. 22 to spray water on the ship to help quench the flames. The crew onboard the tugboats will help position the Felicity Ace in order to assess safety conditions. Additionally, the initial salvage team will board the ship to provide further information on the ship’s state. Two more salvage boats are on their way to the Felicity Ace to provide even more aid in firefighting and towing the remains.

A large area of concern from the Portuguese Navy is the environmental consequences the fire will have on the ocean, due to the amount of fuel and car batteries present on the ship. According to MOL, there is no current oil leakage or pollution coming from the ship’s fire.