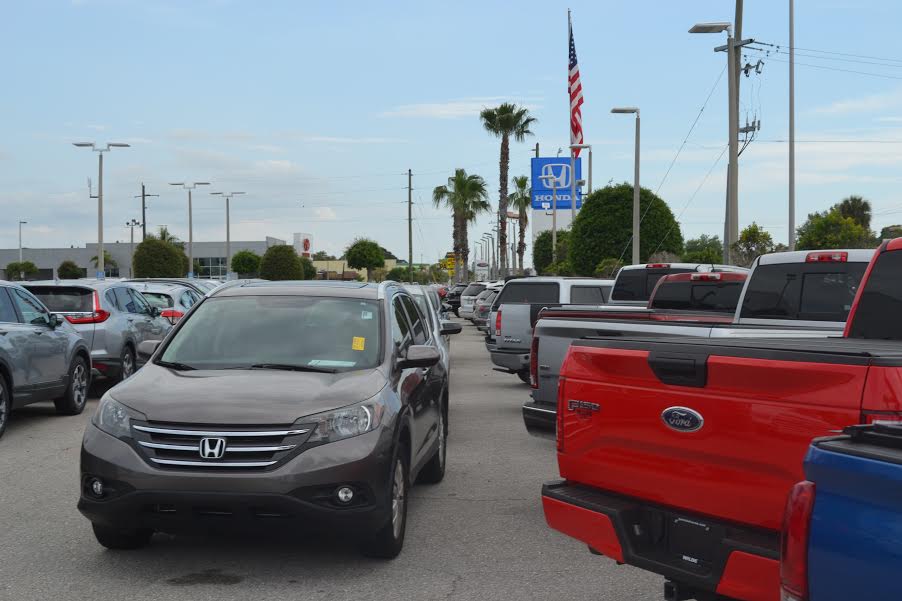 In the dead of the Florida winter, I lost my closet, filing cabinet, library and storage for empty water bottles. By this, I of course mean my 2005 Dodge Neon, lovingly known as “Baby Car,” since my mother’s Toyota Sequoia towered over it in the garage when it was first parked there in 2013. Chronicled below is the journey to find Baby Car’s successor at a Honda dealership in Venice, Florida.

Many who have been car shopping before will liken the transaction to pulling teeth; Julie Mycroft is one of those people. Mycroft is a Senior Loan Processor, any dealership’s nightmare and my mother. She was in contact with her loan processor and insurance agents before she even stepped foot into the lot full of potential cars. The moment it became clear that Baby Car was not going to make it up to my college graduation, she set out to work.

In the days prior, she had gotten herself and me pre-approved for a co-signed loan with her credit union of choice, Achieva. I was told this was to help me with establishing credit. My parents bought Baby Car from a person who fixes up and sells cars. Now I would be making car payments. Pre-approval for the $15,000 loan would last 30 days.

Both Student Loan Hero and Road Loans, advise students to, if possible, find someone to cosign a car loan because students tend to have lower credit scores or little to no established credit. Without a cosigner, Road Loans suggests tight budgeting and Student Loan Hero suggests looking for a cheap car to buy without a loan or researching costs of regularly using ride services.

Mycroft’s next phone call was to the family insurance agent to inform him that we had sold the Dodge Neon and would be getting another car. The agent opted to label it as a “swap out,” although my mother explained that this was technically not the case. “Swapping out” means trading your car in at the dealership for credit towards another car. She sold Baby Car on Craigslist a week prior.

“Keep your conversation to a minimum—they are not your friends, they want your money,” Mycroft said of the salespeople on the drive over. “Don’t talk about your dog or the picture on their desk, that is probably a stock photo printed out.”

Thomas “Tommy” McNeill Jr., the dealer for this sale who had been in touch with Mycroft in the days leading up to this visit, had his work cut out for him. Mycroft did business with his father, McNeill Sr., the previous year, on behalf of her son.

The search for my new used car began on the dealership lot. Mycroft instructed me to start wandering among the cars with her.

“No need to find someone, trust me they will find you,” she said. Sure enough, we were approached by a dealer moments later and able to ask for McNeill.

Mycroft and I each picked a car that caught our eye. Their reports were printed out and the test driving began, but not before I learned the difference between a lease and a fleet vehicle.

Mycroft had her eye on a black 2017 Honda Accord, but picked up on its “fleet” classification while flipping through its report. The car was beautiful and I did not see any issue, but apparently one needs to be careful with “fleet” vehicles because this means they were previously company cars and were therefore likely driven a lot by multiple drivers.

Nevertheless, the three of us set off in the Accord, and McNeill’s life may have flashed before his eyes when Mycroft decided to let go of the wheel, though he did not admit that.

“I have had way scarier rides with some of our elderly customers,” McNeill said.

Mycroft, as much as she hates car shopping, was not trying to crash a fleet car off the lot. Rather she wanted to see if it “pulled,” which often indicates issues with the steering wheel’s alignment. With each release of its wheel, the car would veer slightly to the right, ruling it out as a potential purchase for Mycroft.

Next we looked at my pick. A goofy looking maroon 2016 Honda Civic with stripes down the middle of its seat. I started it up, but it never left the lot.

“What is that, a four cylinder?” Mycroft asked, and McNeill affirmed this was the case. “Oh, absolutely not, you will drive this thing into the ground. It sounds like a hamster is running for its life under the hood.” My mother knows me well.

At this point, Mycroft and I had still not stepped foot inside the dealership. Neither of us were expecting to leave with a car that day, until McNeill emerged with two water bottles and a lead. It hovered above our initial price range, but was a 2017 lease with a little over 7,000 miles on it. From the back of the lot, a silver Honda Accord emerged as a possibility.

This Accord did not veer wildly when test driven by Mycroft, and her main concern was the light gray interior because I am not known for keeping my car clean.

The next step toward the purchase involved Mycroft calling her loan officer at Achieva to ensure that she could ask for more than anticipated in the initial loan agreement, since the car was a bit over her initial budget. Once the new amount was approved, Achieva wired money to the dealership.

Mycroft and I returned to pick up the car first thing the following morning. Finally, we were lured into the dealership with the promise that the transaction would be quick and painless. In the business office, Mycroft and I were prompted to take turns signing and initialing a plethora of paperwork.

I was finally handed one single key to the Honda Accord. The lack of a spare key irked Mycroft, who claimed she may not have bought the car had she known this. McNeill offered to get a locksmith that works with the dealership to the family residence to get a chipped copy made. Being chipped means a key can start a car as well as unlock it, and can cost $200 or more, according to a 2013 Consumer Reports article. Mycroft declined this offer with the intention to get it done at a hardware store; it has been about a month since I drove the car off the lot and still no spare key. McNeill took the time to show me the car’s technological navigation features and connect my phone to the car’s bluetooth as I listened, still in quiet shock that the car was now mine.

Information for this article was gathered from studentloanhero.com, roadloans.com and consumerreports.org.