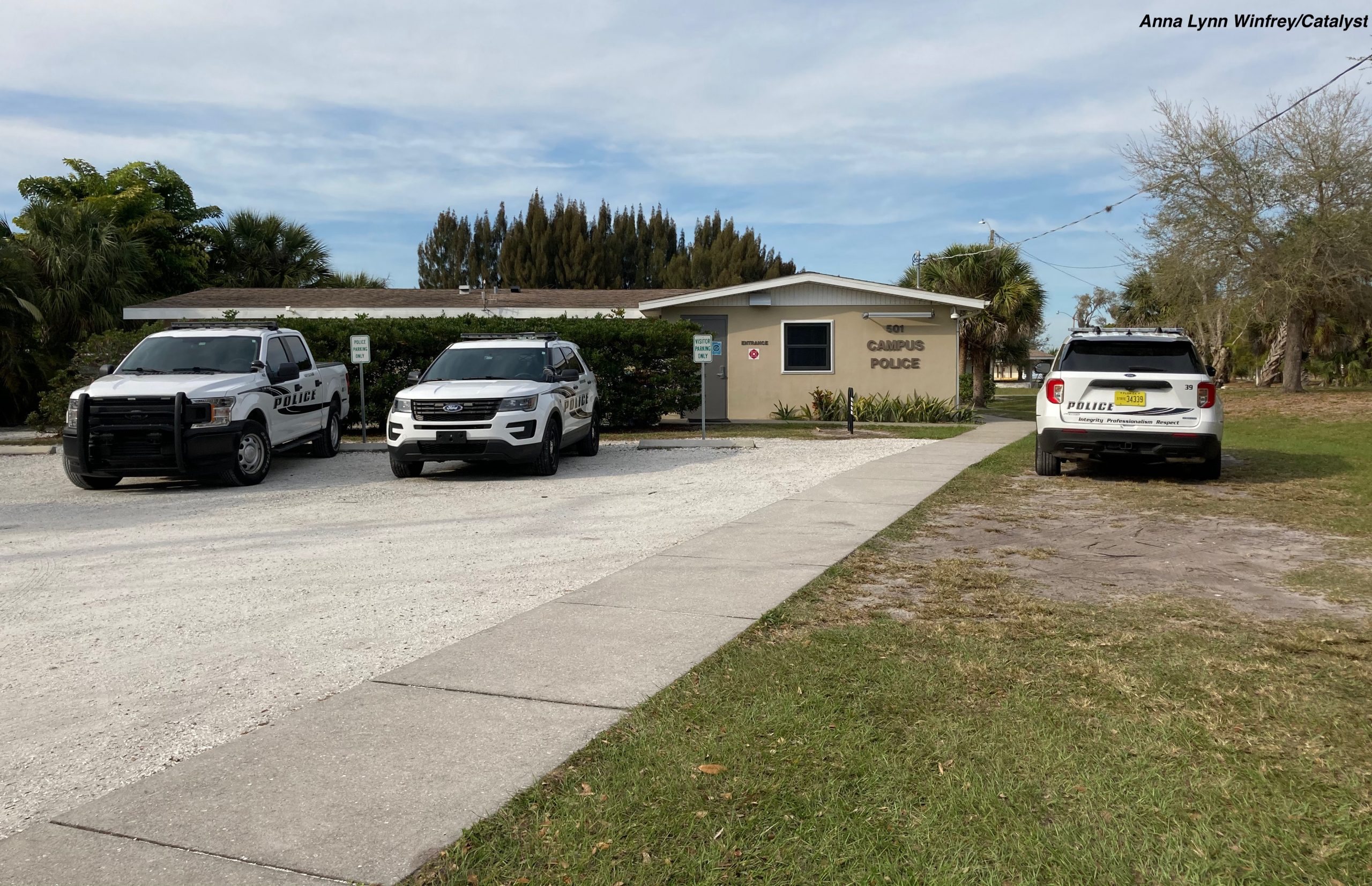 The exterior of the New College campus police station on March 5, 2021.

Since the summer of 2020, there has been a spotlight on the ways that various communities allow the police to do their job, behave and interact with civilians. New College is no exception: the injustices that took place over the summer pushed the administration to form an ad-hoc committee along with the New College Student Alliance (NCSA) overseeing changes to rectify student grievances with the campus police. On Wednesday, Mar. 3, the committee held a meeting to discuss grievances that students have held with the police and how they could potentially rectify these issues.

The first portion of the meeting was an NCSA-led presentation by President Sofia Lombardi and co-Vice Presidents of Diversity and Inclusion Chloe Fodor and Rocio Ramirez Castro in which the cabinet members highlighted important problems with the campus police, supported by direct quotes from students. The second half featured guest speaker Director of Public Safety at Princeton University Paul Ominsky.

The problems discussed included sexual harassment and intimidation at the hands of police and police non-compliance with COVID-19 restrictions, as well as the size of the campus police compared to the number of students on campus.

In addition, the NCSA surveyed students on their opinions about whether they wanted to see more or less police on campus, as well as the campus police potentially using alternative forms of transportation. These surveys were answered by 121 students. 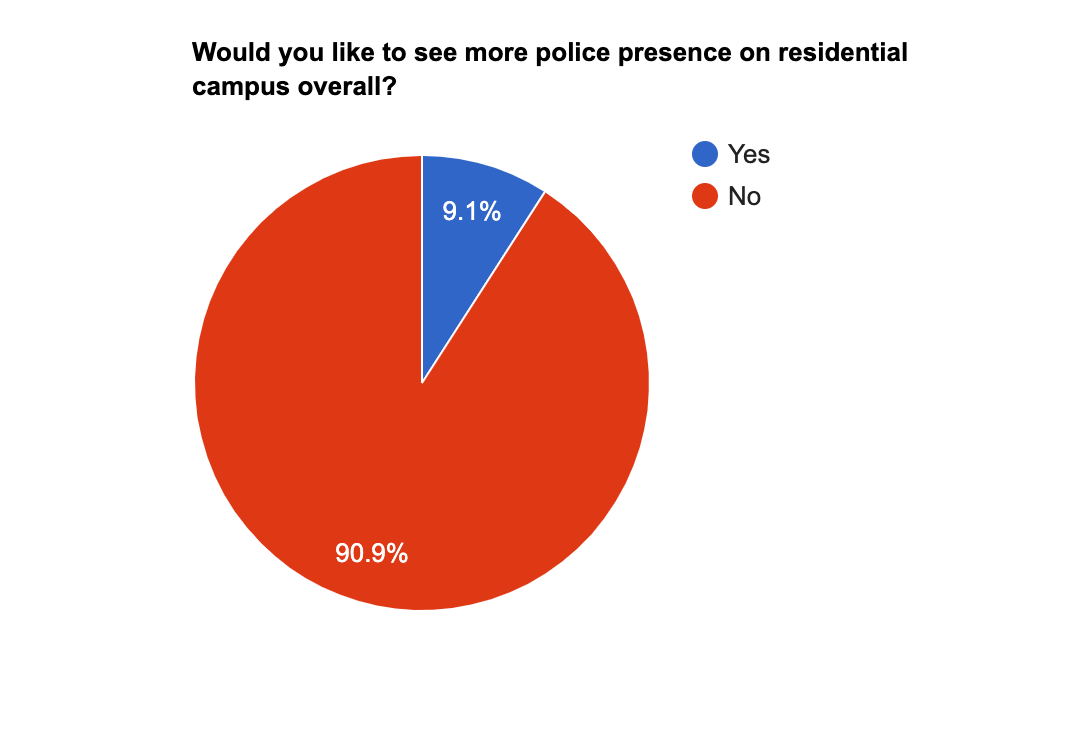 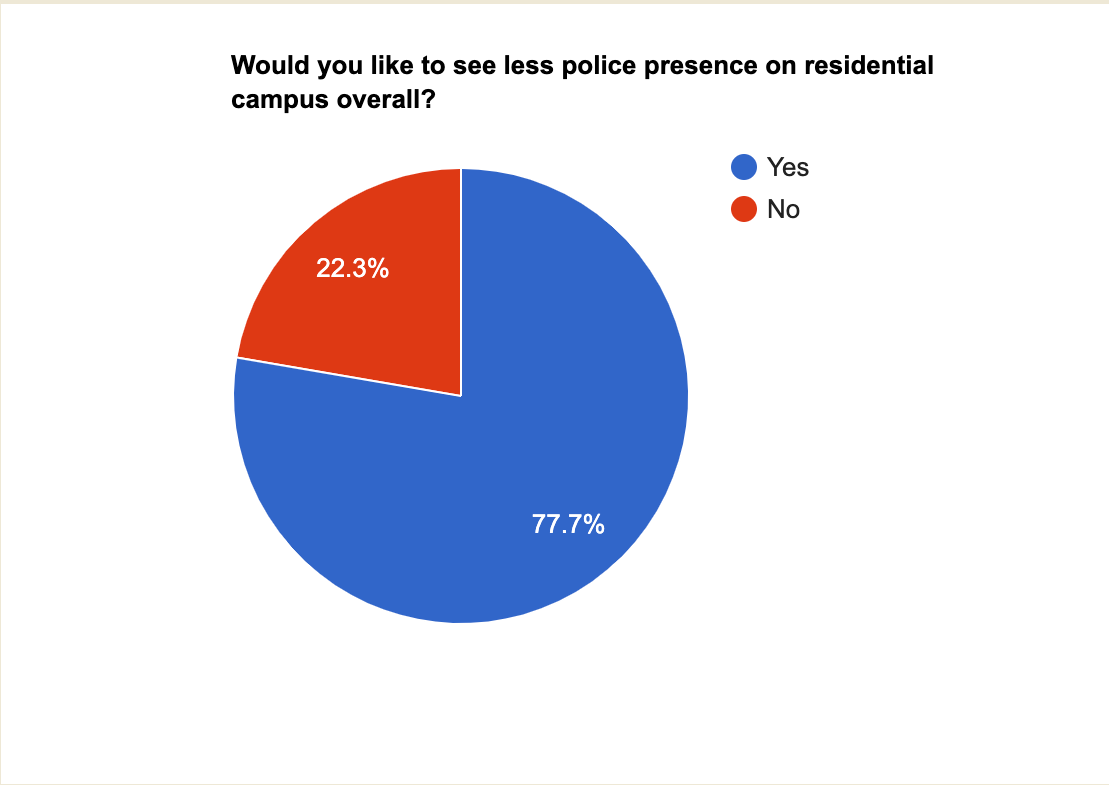 These survey findings show that the majority of students asked about the topic would likely say that there is enough of a police presence on campus already, if not too much of a presence.

Once the grievances were listed, the NCSA cabinet went on to discuss potential ways to effectively make change. One of the biggest issues talked about was the uneven power dynamic between students and police. Since police walk around the campus armed and in uniform, many students admit that they do not generally feel comfortable around them. This feeling is only exacerbated when police are spotted breaking campus-wide rules, such as not wearing a mask outside around others. NCSA mentioned that students have felt like reporting these officers seen flouting the rules, but due to fear of retaliation these cases largely go unreported.

The NCSA made several recommendations in order to fix this problem. One of these was that officers simply patrolling campus during the day perhaps don’t need to be armed or fully in uniform. This idea was supported by the belief that New College campus police are not usually putting their lives in danger by coming to campus. According to FBI crime data, there have only been nine reports of violent crime between 2009–2019. The NCSA argued that disarming officers in situations where they are not in mortal danger would likely have a positive effect on the relationship between students and police by lowering the feeling of intimidation and anxiety when interacting with police. On the other hand, police captain Kathleen Vacca, had a differing opinion on the subject.

When asked if it would be possible to disarm offices patrolling the campus at the committee, Vacca responded, “Yes, law enforcement officers (LEOs) are armed. It would be inherently dangerous to arrest or take people into protective custody without being armed. Both lethal and less-lethal means should be immediately available. Assaults on LEOs have risen.”

Furthermore, the NCSA recommended that campus police no longer be present at Student Activities and Campus Engagement (SA[U]CE) and other general student events. Aside from student reports of police misconduct and inappropriate behavior at student events, having officers at an event sometimes takes away from the student budget for the events.

A quote used in the presentation from a student posted on the forum reads, “It’s crazy how much of the STUDENT budget for STUDENT events goes to a service or partnership that we already pay for through our tuition/police budget.”

Rather than have the police attend student events, the NCSA cabinet proposed that the school begin to hold events exclusively for the purpose of having these student-police interactions to improve the relationship between the community and the people meant to defend them.

Additionally, attention was drawn to the ratio of police to students and the amount of money that is given to the police budget each year. In an article published last week, Editor in Chief Anna Lynn Winfrey examined the budget for the police compared to the total Education & General (E&G) fund for the school from fiscal years 2004 to 2020. As the years went on, the E&G fund total kept going up and so did the portions to the police budget despite total enrollment at the school going down. As the amount of people that needed to be defended went down, the money that went to the defenders went up, which the NCSA cabinet believes to be an unnecessary use of resources.

“I think not changing the percentage of the budget allocated to the police as a whole is problematic,” Lombardi mentioned. “The police budget has well over doubled in just the last decade, which contributes to the issue of having such a large police staff for such a tiny school.”

Looking to the future, the NCSA hopes to listen to the voice of the community and make change in the areas most necessary. The cabinet expressed frustration that students have had over being asked time and time again what their opinion is on the campus police just to see no change time and time again.

“Two out of the four ideas I ran on last fall were to decrease the campus’ police presence and increase transparency,” Lombardi said. “I’m hoping to limit presence on campus by using alternative responders, like mental health workers or administrative assistants that students can turn to rather than armed police officers.”

Given time with this ambitious group of NCSA members, change can come to New College to repair and fortify the tumultuous relationship between the campus community and the campus police.