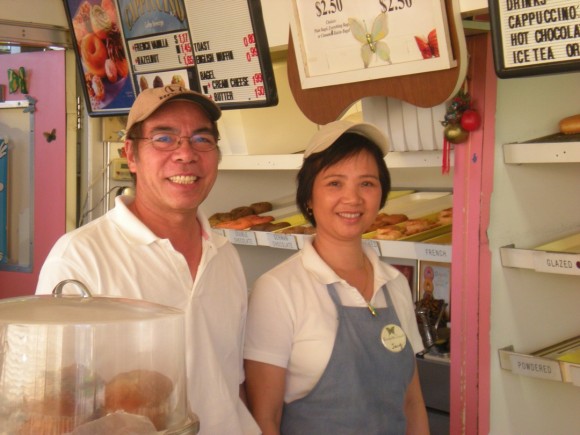 A sign reading “A Donut a day keeps the doctor away” adorns the interior of Bradenton Donuts. Near this is a large picture frame filled with photos of all of the regular customers. This gaggle of senior citizens and retirees has made the little donut shop, whose retro facade dates back to 1965, their home away from home. Most of them eat a potato flour donut from Bradenton Donuts each day.

Jinny Huang and Pei T. “Peter” He, the co-owners of Bradenton Donuts, embrace their regulars. They offer them a 10 percent discount on their purchases and know them intimately. “It’s like a big family here,” Huang said. “We are customer and friend — sometimes we go out together.” Many of the regulars arrive at dusk to get their donut fix and help Huang and He set up the tables and chairs for the day.

The leather-padded and chrome stools in the shop often get filled just by the regulars as they trickle into the shop at wee hours in the morning. They come in shifts between 5 a.m. and 10 a.m. and are very fond of the potato flour that Bradenton Donuts uses for its raised-donuts. “It’s special for the donuts and makes them more puffy and light,” Huang said. “You can taste it and later you don’t feel queasy.”

Some of the most popular varieties of donuts sold at Bradenton Donuts include raised glazed, old-fashioned sour cream, french crullers, Boston creme and apple fritter. Yet everyone has their own specific fry cake that they worship and crave. “Honey dew, honey with peanut butter,” regular Lyle Mominee recommended. “If you ever want a good donut get honey dew. Mhhmmm.” His wife, Arlen, has a penchant for the chocolate cake donuts.

Some of the frequent customers opt for less sugary delectables because of their diabetes. Linton said he likes the plain donuts and encouraged the Catalyst to try one and taste its subtle potato flavor.

“I like the English muffins because I am diabetic and another reason why I like this place is because I met my husband here,” Konnie Glissner said. “It’s the most friendly place in town. He was the only shy one here — he never says a word. He was sitting across from me and he wasn’t talking to no one and I said, ‘You have pretty hair’ and he said, ‘Everyone tells me that.’ Then a few days later, we both went out at the same time and he told me about this good Chinese restaurant … I figured he must be nice so I went with him and I found out my husband died from cancer and his wife died from cancer.”

The coffee is freshly ground and inexpensive. Linton said that many regulars come for a cup of coffee and then linger for two or three hours.

He and Huang are both from Southern China and started up Bradenton Donuts on Sept. 16, 2002. “My daddy was a baker,” He said. “He owned a business in South America for many years — most of it I learned from him.” Bradenton Donuts is a family business — He and Huang are married and their relatives often help them in the shop. He said that he is hoping to expand into the Sarasota area. “I’m still looking because you know the customers from Sarasota come over here and say it’s a long drive,” He said.

Novocollegians can drive south from campus on Tamiami to taste the delicious donuts and bask in the strong community at Bradenton Donuts. Perhaps they too will discover that a donut a day keeps the doctor away.