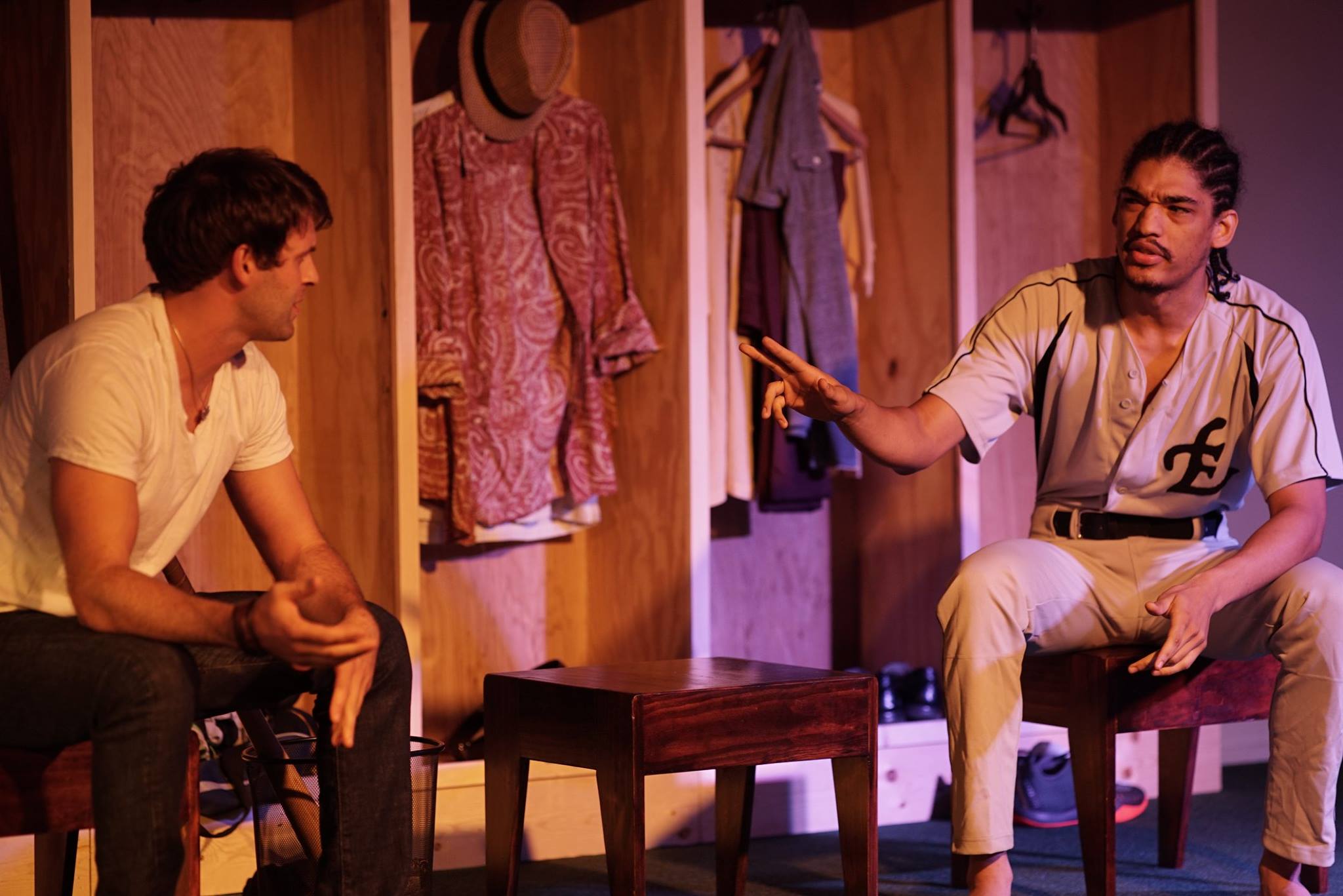 Kippy Sunderstrom helps Darren Lemming communicate his feelings and is often the one who calms Lemming down when he gets heated. (Photo courtesy of The Studio@620)

Boys, baseball and butts–yes, bare: three elements that may, at first, deter some typical play-goers. These components, however, provide the basis for an important story that addresses issues of homophobia, class struggles, racism and masculinity.

From Sept. 22 to Oct. 1, The Studio@620 presented Take Me Out, a Tony award-winning play by Richard Greenberg. The story, directed by Bob Devin Jones, follows the events that unravel after the main character–baseball star Darren Lemming–comes out as gay.

Within the play, individualism, loneliness, isolation and the importance of team are prevalent themes that interestingly draw a parallel to feelings and experiences shared by many closeted individuals.

Ironically though, these themes outwardly manifest themselves in Lemming after coming out, providing a personal account that critiques both the sports industry and the role that masculinity plays in attempting to express sexuality openly.

In addition to homophobia, the play addresses issues of class.

Overcome with fame, wealth, success and popularity, Lemming feels as though his coming out will be readily accepted. Upon realizing that things are not that simple, the young, handsome center fielder slowly progresses from confident celebrity to contemplative human being.

As Lemming grows more into himself, he seems to discover a soft side that goes beyond his career, talents and image. He finds unlikely solace with his business manager, Mason Marzac, a complete foil to Lemming.

Their friendship seems to form not only because Marzac is openly gay and helps Lemming accept himself, but also because the two are on the fringes of society.

Whereas Lemming playfully mentions that he is too far “above” typical social groups to have true friends, Marzac makes it known that he feels he is too far “below,” being introverted, quirky and repressed.

I was particularly impressed with the diversity of characters within the story and how their different backgrounds influenced the way that they experienced some of the main themes: isolation, loneliness, self-acceptance, etc.

The main character, Lemming, was born to a White father and a Black mother and grew up in a stable middle-class household. There are scenes that examine the strains of being a gay person of color, and how hate goes beyond just his sexuality.

There are also two Spanish characters, completely separated from the team because of language and cultural barriers. They only ever appear together and seem to find comfort in their relationship with one another. They are not depicted to be as lonely as Takeshi Kawabata, who has no one to relate his experiences to.

Takeshi Kawabata, a Japanese star pitcher, could not speak English and was thus disconnected from both the team and American society. His feelings of loneliness were portrayed through various monologues in his native tongue, Japanese, which were loosely translated by narrator and team member Kippy Sunderstrom.

Sunderstrom represented differences in class, having graduated from Stanford. He points out that he was accepted because of his academic prowess, not because of his talent for baseball. Sunderstrom’s intellect was very obviously juxtaposed by Shane Mungitt, a pitcher from “somewhere in the south” that was brought in during the beginning of the season.

Mungitt, an individual with many psychological problems carried from witnessing the tragic murder of his parents at an early age, becomes a catalyst for tension and drama within the play. Mungitt struggles with communication and is portrayed as a half-wit; all he seems to know is how to throw a ball with power and skill.

After a game one evening, whilst talking to a reporter, Mungitt uses derogatory terms to insult both the races of his teammates and Lemming’s sexuality.

In these moments, there’s an awkward, choking air of tension and discontent within the audience. This play made me uncomfortable, but it presented situations that could actually happen in American society today. In this way, the play holds a mirror to the world in an attempt to help show relevant problems, like many great realist works of the 19th century.

The cast at The Studio@620 did a particularly great job in telling the story and bringing the characters to life.

Phillip Rankin brilliantly portrayed Lemming’s cool, celebrity-like personality, but also skillfully captured the slow shift from overtly confident and proud to contemplative and “real.” Moments of rage, fury and frustration were also effectively depicted by Rankin–actions like hastily sweeping back his hair and nervously shaking his leg really resonated.

Chris Rutherford made the whole audience fall in love with Marzac’s quirks. There seemed to be a true harmony between Rutherford and his character, making the story all the more believable. He added a sort of comic relief, but also a loyal shoulder to rely on–for both Lemming and the audience.

Drew Smith was very convincing in his portrayal of Sunderstrom. He delivered his lines with ease and comfort, coming off in a calm and collected manner, just as I imagine Sunderstrom would be.

As much as I hated Mungitt, Amadeus Dameron really captured the character, which I imagine was very difficult to do. Mungitt seemed like he was truly out of touch with emotions, thoughts, himself and others, scarred from his childhood horrors.

There were multiple full-nude shower scenes, which definitely kept the audience engaged. Being privy to what goes on in the shower room of the baseball team makes the play seem more real–there was no hiding behind tan underwear or other stage tricks.

The Studio also engaged the audience in other ways, such as singing “Take Me Out to the Ball Game” during one of the intermissions and providing drinks and other refreshments.

From walking in and being warmly greeted by Director Bob Devin Jones to being offered free, warm brownies, I was very impressed by the overall experience. The Studio’s motto is “where the answer is always yes,” and it certainly lives up to that kind of hospitality.

According to their website, “the primary goal of The Studio@620 is to bring together people from various cultural backgrounds and experiences, as artists, audience members, and volunteers.”

In addition to successfully recruiting a diverse cast, the Studio was sponsored by the Tampa Bay Rays for this show. By tying the relevant narrative of the play to a real-life baseball team, not only does the community become involved, but a larger platform and support system for spreading the message is achieved.

There were so many scenes and elements that hit home in this play. All in all, this show was a grand slam that I highly recommend.

To find out about tickets, events and pricing, visit thestudioat620.org