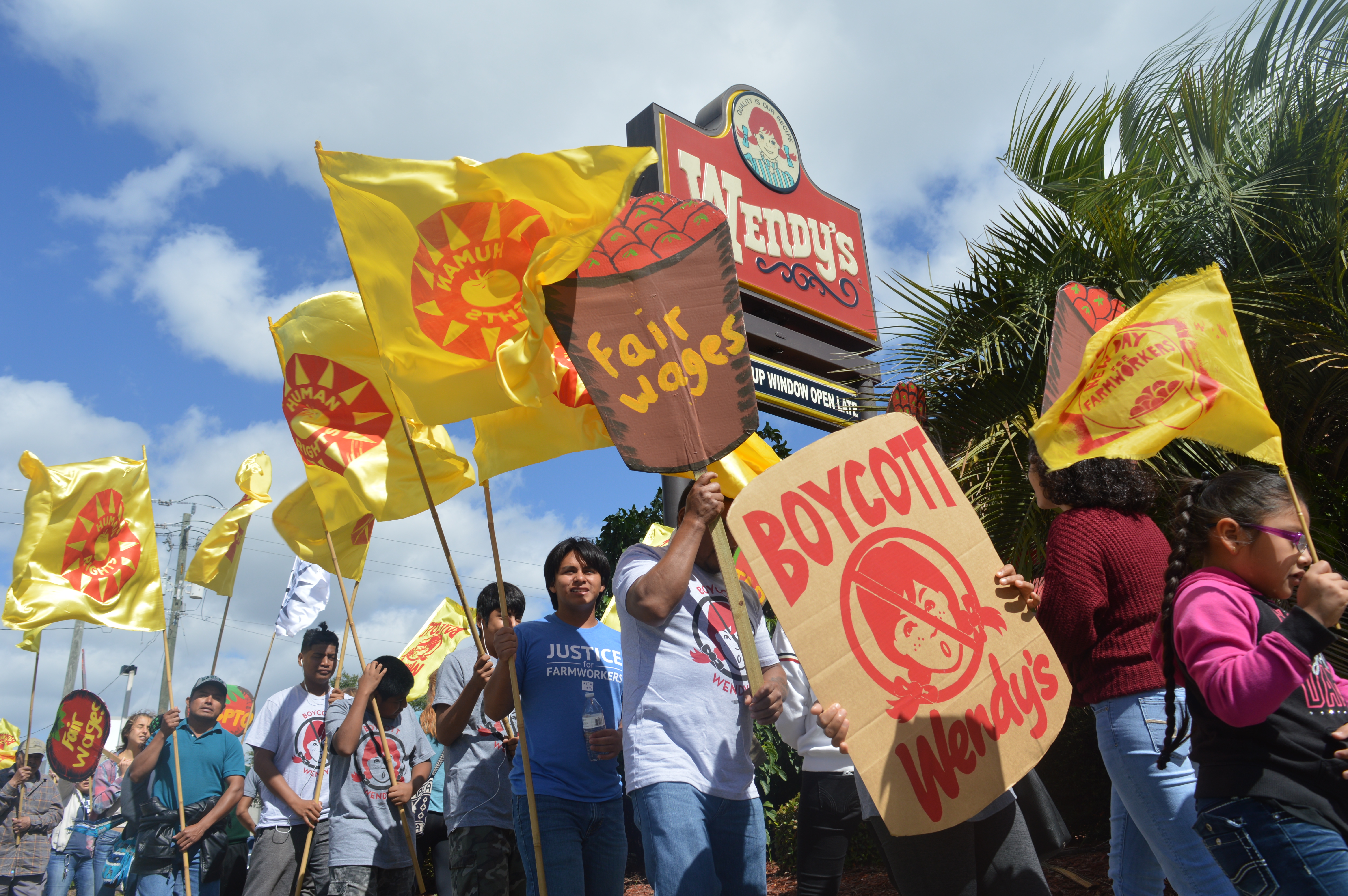 The newly-formed Sarasota Fair Food group and the Coalition of Immokalee Workers (CIW) organized a protest at a local Wendy’s restaurant on Sunday to highlight the pervasive sexual abuse against farmworker women in Wendy’s supply chain. Activists of all ages, faiths and backgrounds marched in front of the restaurant to demand that the fast food chain secure human rights for farmworkers by joining the Fair Food Program.

The Oct. 29 demonstration culminated Sarasota Fair Food’s “Wendy’s, You’re Failing Farmworker Women” week which ran from Oct. 22-29. The week of action, called for by the Student/ Farmworker Alliance (SFA), is the first national mobilization in this season’s Harvest without Violence campaign launched by the CIW Women’s Group.

For years, Wendy’s has resisted joining the Fair Food Program despite major competitors like Taco Bell, McDonalds, Burger King, Subway and Chipotle signing on. However, Sunday’s protest was specifically to highlight a recent decision by Wendy’s to buy their produce from Mexico instead of from farms that participate in the Fair Food Program. 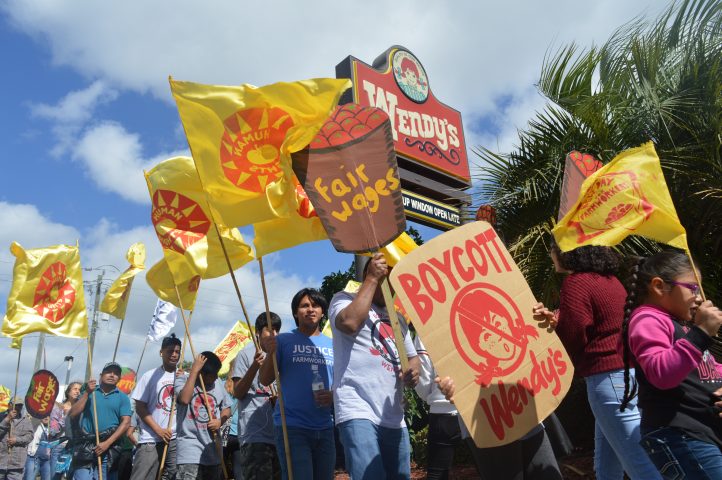 “Wendy’s has stopped buying their produce from the United States where there are protections for farmworkers’ rights and have started buying from Mexico where the conditions are very bad,” Sylvia Perez, from the Coalition of Immokalee Workers, said, translated from Spanish by the author. “In Florida where the Fair Food Program is in place, farmworkers have the right to drink water, to have shade, to take breaks and the right to report abuses.

“In Mexico, farmworkers are subject to modern-day slavery, women are abused by their supervisors and children work in the fields. Wendy’s is supporting this problem by buying from there. So, what we want is for Wendy’s to join the Fair Food Program. That’s why we’re here protesting.”

The Fair Food Program was designed by the CIW as a “partnership among farmers, farmworkers, and retail food companies that ensures humane wages and working conditions for the workers […] on participating farms” according to fairfoodprogram.org. 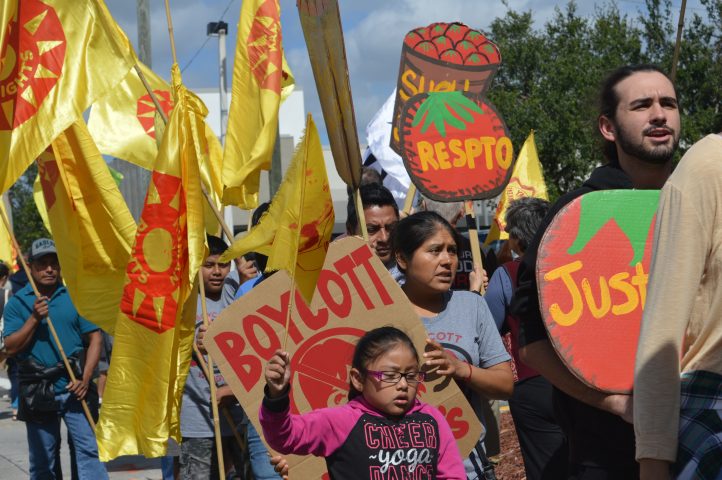 It consists of three parts–first, the Fair Food Code of Conduct which establishes worker’s basic rights to water, shade, breaks and the right to report abuses without fear of retaliation among other protections; second, the Fair Food Premium, a small premium that participating growers commit to pay that distributes as a bonus on workers’ paychecks; and third, mechanisms for enforcement of these standards.

“Before the Fair Food Program, the voice of farmworkers didn’t exist,” Perez said. “None of their rights existed. After the program began in 2010, we established the rights to have water, shade and rest in the fields. Now there are numbers that workers can call to report abuses. We want Wendy to return to buying their produce where these programs already exist.”

This week of action culminating in Sunday’s protest sought to highlight the ways farmworker women are especially vulnerable to abuses in the fields. A 2010 study among farmworker women found that 80 percent had experienced sexual harassment at work. Extreme poverty, racial discrimination, language barriers and often complete dependence on individual men for their continued employment make them particularly vulnerable to sexual harassment and violence.

“Before the Fair Food Program, if a woman complained about her supervisor abusing her, they would let her go from work,” Perez said. “So, in order to not lose work, a woman would have to accept the conditions they put her in.”

The CIW’s Fair Food Program is creating these new structures of accountability in the tomato industry in Florida. The Code of Conduct includes a zero-tolerance policy for any instance of sexual harassment or assault.

According to the CIW’s website, confirmed sexual harassment claims triggers consequences as severe as the curtailment of purchases from participating buyers for at least a three-month period unless corrective action is taken immediately.

The CIW’s fight to bring Wendy’s to the negotiation table has been years in the making, but has been gaining momentum. Sunday’s local protest was the result of the combined efforts of people from all walks of life who support farmworker’s struggle for human rights. Protesters ranged from the ages of five to 75 and spoke a variety of languages. Marching together were farmworkers and their families, students, professors and people of faith.

New College of Florida in particular has had a long-standing relationship with the CIW, organizing several actions over the past few years to connect students and professors to the efforts of farmworkers in Immokalee, only a two-hour drive from the college campus.

“New College’s role was obviously to involve our school but also to educate and involve the rest of the Sarasota community,” thesis-student Zoe Heuermann said, who represented the New College student body at the protest. “The fight’s not over. We’re young and the future is coming.”