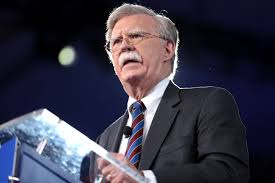 At Miami Dade College, National Security Advisor John Bolton denounced the authoritarian regimes of Cuba, Venezuela and Nicaragua to a crowd that roared with its support. The Nov. 1 speech, held at Freedom Tower, was a clear enunciation of the aggressive policies the Trump administration has been taking against the countries, which included a slew of new sanctions signed into law by President Trump that evening.

Bolton branded the three states with a new term, referring to them as the “troika of tyranny,” and stated that the United States “will not reward firing squads, torturers and murderers.”

The Trump administration has largely reversed the Obama administration’s policy of normalization with Cuba, citing the regime’s repression of its own people and the suspicious circumstances surrounding what the State Department referred to as “health attacks” affecting U.S. diplomats in Havana in 2017.

Bolton called on the Venezuelan government to release its political prisoners, to hold honest elections, to reinstate the rule of law and to open the country up to humanitarian aid.

“[The Nicaraguan regime] will feel the full weight of America’s robust sanctions regime,” Bolton said. Nicaragua was harshly denounced for the violence perpetrated by government officials against political demonstrators which left hundreds dead.

Bolton was clear that the U.S. would not be acting alone, claiming that the administration was partnering with Mexico, Colombia, Brazil, Argentina and “many others.” Specifically, he expressed excitement over the elections of Jair Bolsonaro in Brazil and Ivan Duque in Colombia, calling them both “like-minded leaders.”

Information for this article was gathered from cnn.com and wsj.com.