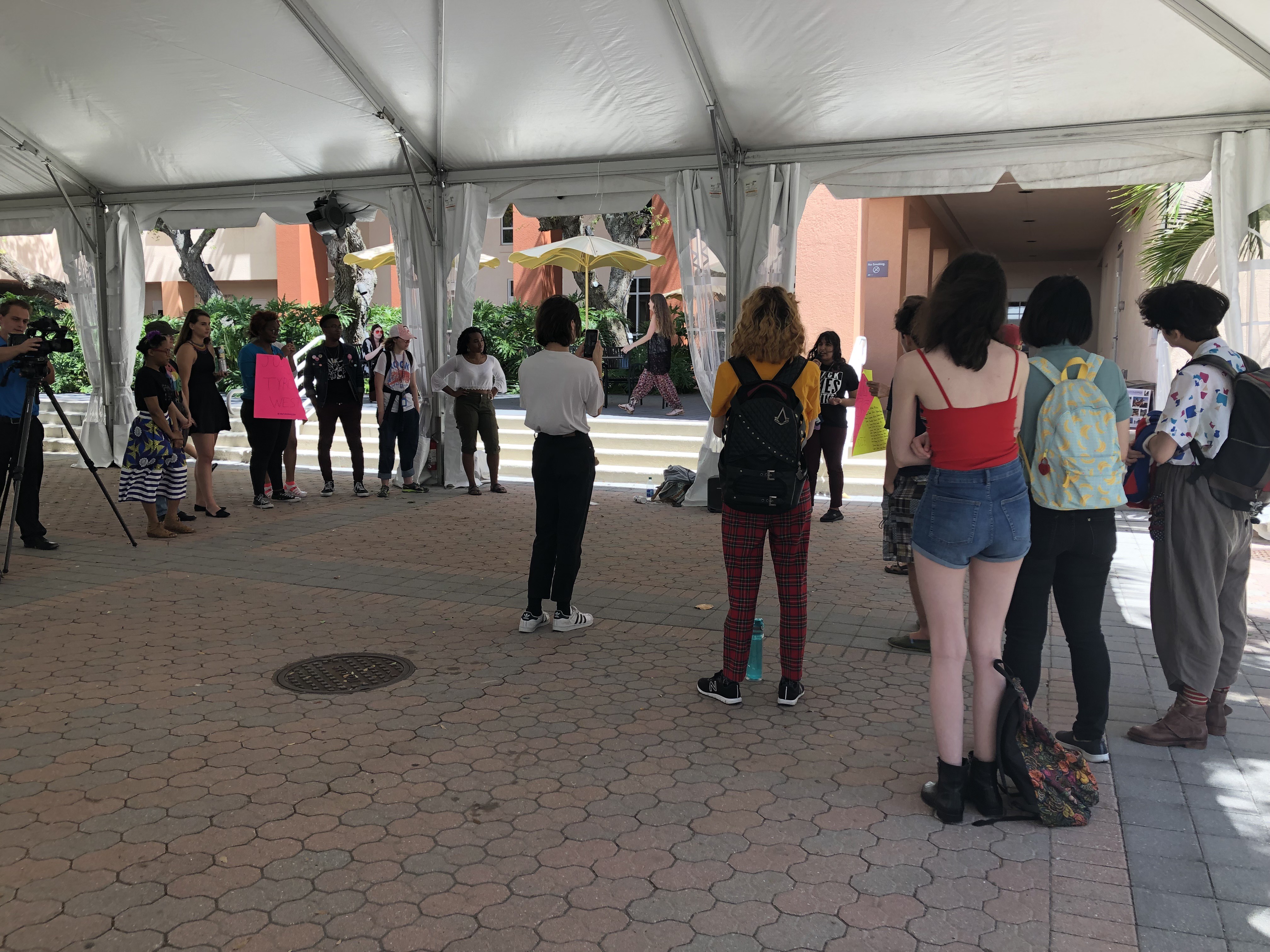 On the afternoon of Wednesday, May 1, community members gathered in Scott Plaza of Ringling College of Art and Design (RCAD) for a Black Lives Matter rally. Shivani Bathija, a first-year Illustration student at RCAD, organized the event, inspired by a sit-in at Johns Hopkins University (JHU).

“Students there have been sitting in at their administrative hall for almost a month (since Apr. 3),” Bathija said in an email interview. “They have three demands: for their institution to cut their current contracts with [Immigration and Customs Enforcement (ICE)], to cancel the current plans to implement a private police force and to call for justice for Tyrone West, a Black man shot down in Baltimore in 2013. One of the officers who shot Tyrone down was from Morgan State University, furthering their point that private police on the JHU campus is very dangerous.”

On why she felt it was important to facilitate a Black Lives Matter rally at RCAD, Bathija noted the political divides in Sarasota, due to the mix of college students and retirees. Further, she emphasized the importance of voter engagement and activism in Florida.

“We do live in one of the few swing states, after all,” Bathija said. “Because of this, it is so important to let people know the importance of voting and making sure our voices are heard. That’s one part of it, encouraging the people here to consider their voice and that we have the ability to make a change.”

“This area, due to underfunding and a general neglect toward Black areas, has a high amount of people in poverty, people who deserve help they are not getting,” Bathija said. “However, I have been told countless times by the White faculty here that Newtown is ‘unsafe’ and to avoid that area because the people are ‘sketchy.’ This is a common thing thrown around Ringling—I even heard it as a 17-year-old here for pre-college. I fell victim to these rumors and started to believe them, but had the opportunity to hear from the Black community from Ringling in which I was told everything I heard stemmed from racism. I also was able to meet a lot of the kids from Newtown at a Halloween event we had at Ringling, and met some of the sweetest kids who are just trying to be kids. Why do we villainize them? I raised that question at our rally.”

Bathija was surprised at the turnout at the Black Lives Matter rally and hopes to continue organizing activist events in the future.

“We had around 30 people show up, and for a campus of around 1,400 people, I think that’s spectacular,” Bathija said. “I only planned it in six days, so I did the best I could to publicize it. This may be the first rally of this caliber at Ringling, and as a freshman I only plan to aim bigger, as they have not had the last of me and the rest of the community willing to make a change.”