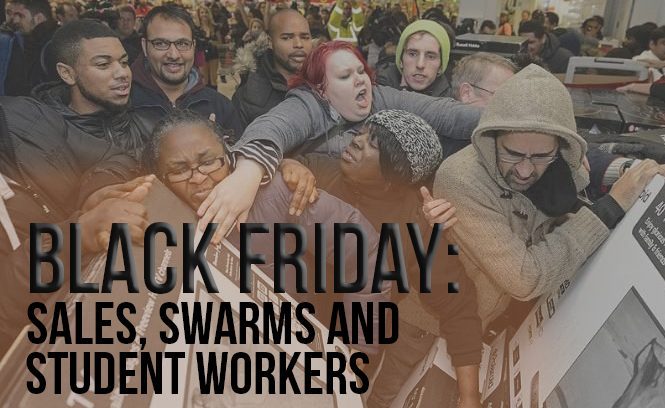 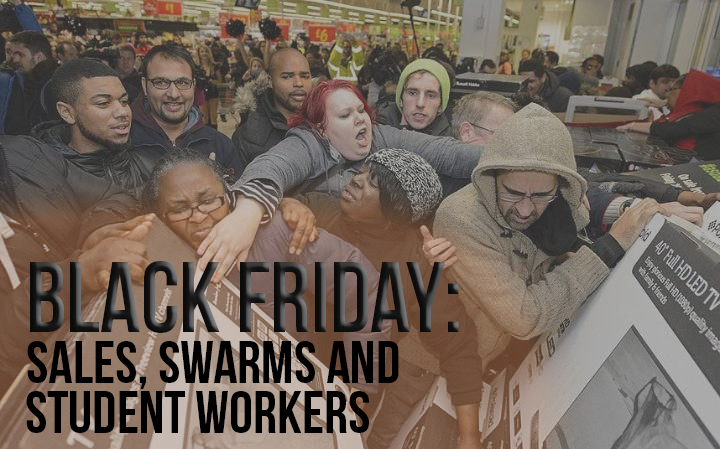 For some students, the Thanksgiving holiday provided a time to relax, eat food and catch up with family. For others, the break was inevitably interrupted by Black Friday.

Black Friday, regarded as the first day of the holiday shopping season, traditionally takes place on the day after Thanksgiving. In recent years, however, stores have started to open their doors on Thanksgiving evening, drawing crowds of full-bellied shoppers to their sales.

While increasing hours of operation increases the amounts of sales on Black Friday, workers must often sacrifice their holiday plans for their job commitments.

In order to account for holiday shopping, stores hire seasonal workers. A survey conducted by the National Retail Federation (NRF) reported that stores would hire between 500,000 and 550,000 seasonal workers in 2017.

As stores expand their hours, workers lose time devoted to their holiday plans.

“I was frustrated because most of my holiday was taken up working and I was not able to go back home for thanksgiving,” first-year Marcela Prado Zapata wrote in an email. “Not everyone’s awful during black Friday, but some people really need to learn some manners.”

Zapata works at Journeys in the Mall at University Town Center (UTC).

“People don’t understand that we are humans too and it’s pretty sad,” Zapata wrote. “I was working so much I didn’t get a chance to shop at all which was a bummer.”

First-year student Isabella McDonnell was also working during the weekend.

“I worked Thanksgiving from 4:30 to 11:30 p.m. because we were open all night,” McDonnell wrote in an email. “I work at the Starbucks by the mall so we were very crowded […] on Thanksgiving we would get huge crowds of people every couple hours when different stores were opening (Kohls, Walmart, etc).”

“I volunteer for them because I do get paid extra (time and a half) and I don’t have family in SRQ, so it allows people who do have family here to spend time with them,” Mintner wrote in an email. “This year for Thanksgiving there was extra work […] we get a lot of pancreatitis cases (vomiting and diarrhea from high fat thanksgiving food) and foreign body surgeries (turkey bones/string stuck in intestinal track).

“[T]he owners are typically high stress due to the holiday combined with whatever medical issue is going on with their pets, so we get a lot of disgruntled pet owners,” Mintner continued.

An estimated 69 percent of Americans—about 164 million people—planned on shopping during Thanksgiving weekend, according to NRF’s annual survey.

The survey asked 7,429 consumers about their shopping plans and has a margin of error plus or minus 1.2 percentage points.

Cyber Monday was estimated to have the second highest shopper count at 78.4 million. Thanksgiving Day showed the least amount of shoppers at around 32 million.

Though many took advantage of deals over the Thanksgiving weekend, some consumers refrained. 31 percent said they would not shop during the holiday weekend.

Millennials planned on spending the most during the holiday weekend this year: an estimated 61.9 percent planned on participating, followed by 49.5 percent of Generation Xers and 27 percent of baby boomers.

Online shopping also increased; in 2016, shoppers spent a combined total of $5.27 billion online on Thanksgiving and Black Friday, which was a new record. For 2017, $5.57 billion was expected to be spent, which is an increase of 5.70 percent.

Amazon claimed between 45 percent and 50 percent of all online Black Friday sales, according to a new report from GBH Insights. GBH called the results “eye-popping.”