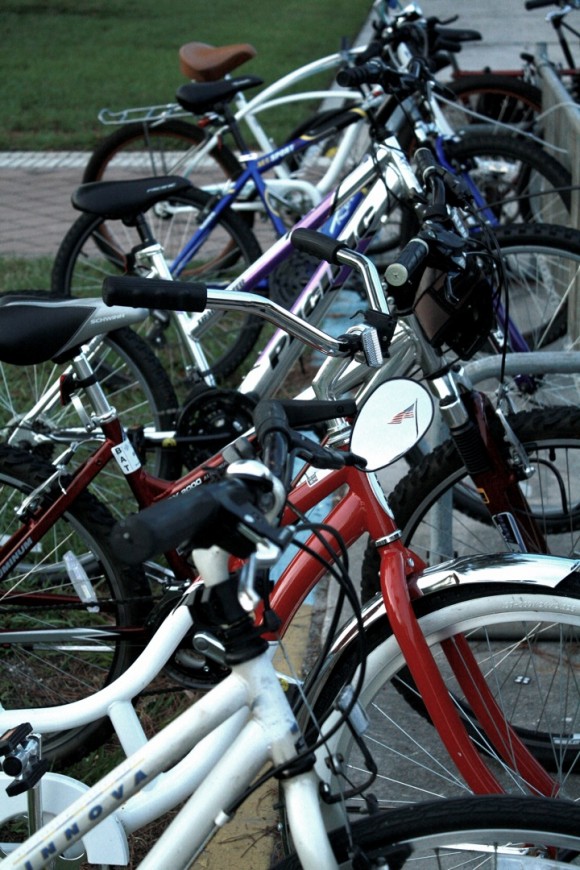 Many Novocollegians use bicycles as means of personal transportation, as evidenced by the many full bike racks.

Along with every college campus, and every tree-hugging hippie there is a bike, and since New College is frequently viewed as a campus full of that same particular group of people, there are bikes everywhere. For whatever reason — health, environmentalism, transportation or even simply community, biking is a large part of the New College experience, just as the factors that lead people to bike are pillars of the NCF community.

Senses of health, environmentalism and community are some of the founding principles of New College that boasts on its website to be “truly a community.” Biking is a great way to get out and experience the city area around one’s home in a healthy and interactive way. It recently has been experiencing a comeback as gas prices only climb and transportation is suddenly a more complicated affair when environmental responsibility and the weight of one’s own wallet must be taken into account.

Throughout the country bike lanes are popping up on major roads and bike shops are becoming increasingly abundant. With the number of bikers increasing along with interests in health and environmentalism, biking is getting to be a more of convenient and preferable transportation option. The New College campus even has its own free, student-run bike shop, an indication of the role biking plays in student life.

“The experience of biking is really rewarding,” alum Loren Mora (09’) said in an interview with the Catalyst. “Transportation becomes about the whole trip, the whole journey. You enjoy it more and the trip becomes a full process, not just A to B.” Mora just completed a cross-country bike trip this past summer with two other New College alumni and she credits her interest in bikes to have started here.

“Biking can be very elitist and intense,” she said. “The nicest bikes are owned by the wealthiest people and the biking competitions that emerge can be as much between wealth and ‘who has the better exercise facilities’ than bikes. And that can create a very intimidating and elitist atmosphere. But then there is another level with people who bike because they have to or because they love the experience, and New College is a place where biking is an active thing and not an elitist thing.  I got into biking because of New College. It inspired me to get out into the community more and better myself.”

“I attended my first Critical Mass here at New College,” Mora stated. “Then I built my own bike in the shop. It really did all start here.” Critical Mass is a biking event typically held every on the last Friday of every month in over 300 cities around the world.  It was originally started in San Francisco to draw attention to how unsafe roads were for bikers and the event grew from there, expanding out of the city and then becoming international.

“I would be interested in leading some Critical Mass type events,” stated second-year and an avid biker Nicole Hokayem. “Generally I like to ride my bike to anywhere there is ice cream, but soon I would like to start organizing a monthly or bi-monthly bike ride to the beach.”

“I enjoy being off campus, a nice brain reliever of sorts,” Hokayem added. “People think that this is a very ‘bubbilicious’ school. By ‘bubbilicious,’ I mean we kind of exist in our own little bubble and don’t leave it very much, so it is nice to go out and get a little bit if sunshine and exercise every now and then,” she grinned.

With the bike community as strong as it is and the opportunities as abundant as they are, it is easy to get involved in biking on campus, there are group trips with some consistency, a bike shop open almost every day and a community of bikers that jumps at the opportunity to take their wheels for a spin.  Healthy, environmentally friendly, and a great community activity, there is hardly a better way to understand what New College is all about.