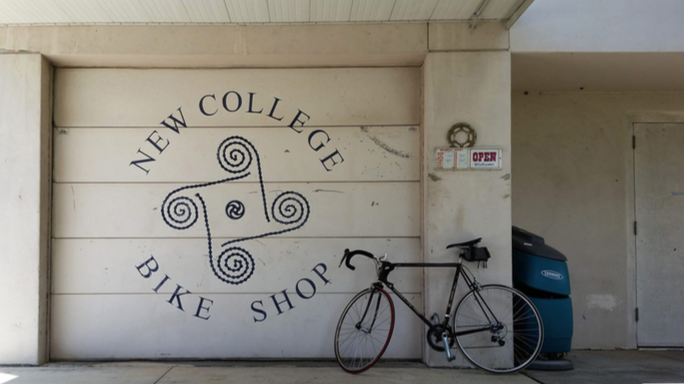 For years, the Bike Shoppe was known for its inconsistent hours that were announced randomly throughout the week and were easy to miss. But now that the student-run Shoppe features a small and dedicated staff of Teaching Assistants (TAs) and a functional system for replacement parts, the past hourly pay for the Bike Shoppe TAs are exactly that: those of the past. Split between three TAs, each of them are lucky to see $100 a month because of the job, despite the demand and responsibilities that come with three people being fully in charge of assisting the almost-900-student-population with their bike related needs.

Thesis student, James Montgomery, the longest-tenured TA on the Bike Shoppe staff, has seen the turnaround of the Shoppe, fueling it with the new hires of third-year Cole Zelznak and second-year Kaithleen Conoepan. From teaching visiting students how to fix their bikes to doing it alone to salvaging old bikes for replacement parts in unpaid time or going as far as even driving the occasional student to their off-campus house because their bike wouldn’t be able to be repaired on time, the responsibilities of the Bike Shoppe staff vary from mundane to extraneous. Many of these hours are spent after the official hours end, or randomly and unofficially opening for the unfortunate student who was not able to make it during their new weekly hours.

While their hard work has brought about what might be the best, most consistent version of the Shoppe to date, with consistent hours – Monday and Wednesday 6 p.m. to 8 p.m., Friday dusk-till-dawn – much of that work is on their own, personal and unpaid time. The staff receives the standard $8.05 an hour, considerably less than the $10 per hour rate Zelznak earned when he worked on bike repair off-campus. As the hours are assigned right now, only eight hours a week are paid for through the New College Student Alliance (NCSA) and the Council of Green Affairs (CGA).

“General responsibilities of the Bike Shoppe are upkeep of the facilities, teaching people how to fix bikes,” Montgomery said. “Because we are a co-op we really want to impart information and educate people on how keep up their bikes and not just do it for them, but we are more than willing just to do it for them.”

On top of that, Bike Shoppe staff have to keep track of their budget, including orders and expenditures, through the Fitness Center, having had to audit the Shoppe for the last two years in an attempt to clear up some discrepancies brought on by the insufficient old system of processing replacement part orders.

In bringing in Zelznak and Conoepan, Montgomery intended to ensure a stable future for the Bike Shoppe, as he will be leaving the Shoppe at the end of his thesis year. With one less TA, the hours won’t be so unreasonably spread apart, but nevertheless, the eight funded hours are unrealistic in comparison to how much time is actually spent by the TAs working each week already.

“We always stay open past the official closing time, and also sometimes we open up because people didn’t have a chance to make it to our hours,” Conoepan said. “Also, like sometimes we have to come in here and work on bikes when we aren’t officially open, and we’re not getting paid for that either.”

Conoepan, upon seeing her again after initially being interviewed, wanted to make clear that she believed that Zelznak was being underpaid for the amount of work he has been doing. While he didn’t accept all the credit, Zelznak had been open about how often he and the other TAs had to work on unpaid, unofficial time.

“We could be open more, if we were paid more,” Zelznak said. “But we are always open extra anyways.”

The Bike Shoppe is not the only instance of TAs experiencing less pay than what they might deserve, and there is a meeting being organized by the new NCSA Chief of Staff  and third-year student Olivia VanHousen for the TAs to discuss their pay. With the ever-increasing student population, it seems commonsensical that the preassigned hours and funds might not be able to address everything the student workers have been dealing with as time has gone on.

“When I took the job and wanted to start doing it, it wasn’t really the pay that attracted me, it was the fact that I get to work on bikes. I mean, sure we get tips once in awhile – and we totally accept tips [which are greatly appreciated by each of the TAs], but I’m not going to make a living wage working for the Bike Shoppe with two other TAs, and I don’t expect the school to make any funds for that. That isn’t to say I wouldn’t like to be paid more,” Montgomery said. “But I just understand how the budget and everything works for the NCSA, you know, other TAs sacrifice their time as well, so do actual class TAs. I think we are all in the same boat – like they’ll give a little bit of money so we aren’t entirely uncompensated for our time, like the real reward is being able to work on bikes and teach kids, you know?”