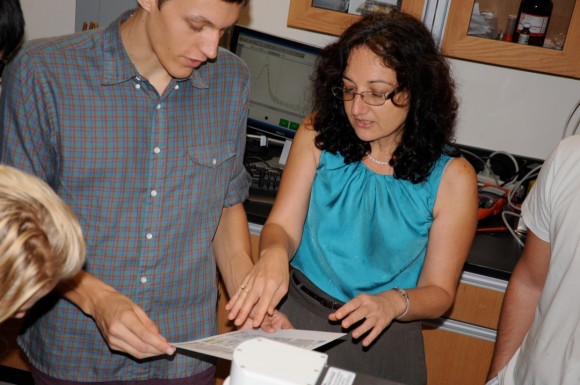 Dedicated on Jan. 6, the new lab has been in the process since 2001. Here, Dr. Sendova works with a student.

The largest federal grant in New College history was awarded to create a lab for studying bite-sized matter. The Optical Spectroscopy and Nano-Materials Lab was dedicated on Jan. 6 and may be the first and only such lab at an undergraduate liberal arts college in America.

Although only recently dedicated, Professor of Physics Mariana Sendova, the lead investigator for the research funded by the grant, said that the lab has been in the making since she came to New College in 2001. “I just wanted to have some kind of conclusion, closure, to let the community know about [the lab], because there were a lot of people from the community of Sarasota who came [for the dedication] and other people who never suspected [there being] such a lab at New College,” Sendova said. “It was kind of PR more or less.”

In total, $2 million was awarded for the new lab. “There were several consecutive grants from the National Science Foundation (NSF) … the Department of Education and then the largest one started in 2009 from the U.S. Army Research Lab (ARL),” Sendova said.  “This is actually the largest grant that New College has received from an outside institution.” The ARL grant of $1.7 million was initially awarded for three years, but on Feb. 16 it was extended for another two.

The lab is in the physics wing of the Heiser Natural Science building, taking up the space of what used to be a general physics lab and a computer lab. The grant provided funds for several pieces of equipment as well as for student research. “Every summer we have two students with a stipend and they work on a particular project,” Sendova said. “[For] the projects, they go around studying properties of nanoparticles. When a material shrinks, there is a threshold below which the properties become completely different from the bulk material. For example, properties of gold are completely different if the gold is in a large bullion, or if they are small particles with a size of a couple of nanometers — a nanometer is one billionth of a meter. So we develop techniques for studying these nanoparticles and their optical properties.”

The equipment includes a short pulse laser, a micro-Raman spectrometer, a micro-spectrometer, a photoluminescence spectrometer, a differential scanning calorimeter and an acoustical and vibrational isolation chamber.  “All this [equipment] is to study nanoparticles under different properties,” Sendova said. “All this, it’s like fingerprinting different species. Maybe atoms, maybe crystal structure — a kind of fingerprint of these things.” In this case, an object’s fingerprint is based off the way it interacts with light.

The new equipment allows not only for studying the optical properties of materials, but for tuning them as well in order to create new materials. “Tuning the properties [is] mainly for finding new materials, to make new materials suitable for optical communications, like optical fibers and stuff like that,” Sendova said.

According to Sendova, students have been working in the lab since 2009 on different ongoing projects. “The equipment can be used for any material; it’s not just specialized for nanomaterials,” Sendova said. “Actually, there is no specialized equipment just for nano-science. The trick here is to find ways to use the existing traditional methods to get information about changing properties of the materials.”