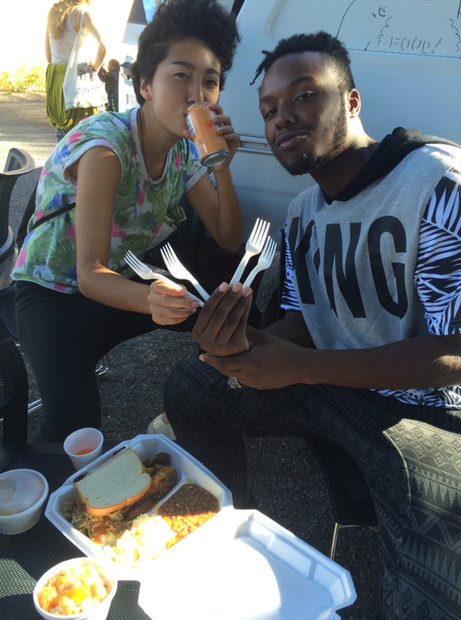 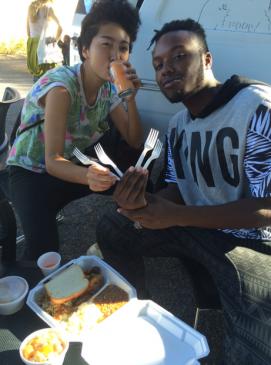 I was in the garden when Lou called me. When I answered he said “We got ‘em, Kat. We got the big dogs.”

I knew better than to ask who or what the big dogs were right away. Lou Murray – the Vice President of nonprofit Newtown Nation and my internship coordinator – is always starting conversations somewhere in the middle.

I let him go on about them big dogs and what it meant for Newtown Nation that the big dogs were coming out to play. That they were coming to us.

Soon he was saying in serious tones we can’t let anyone take this from us, everyone wants it and we need to claim it. This is ours.

That’s when I had to interrupt to ask what he meant by “big dogs.”

“Whole Foods is coming to Big Mama’s,” he said. 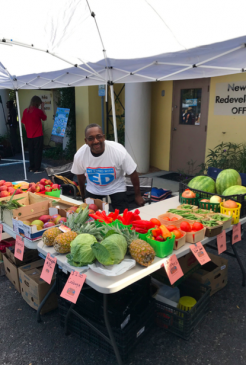 Before that moment, Big Mama’s Collard Greens Fest was just a ragtag – albeit brilliant – idea to promote Newtown Nation’s Farmers Market and get the community involved.

Fast forward a few weeks and watch the quick-moving transformation from an idea to the kick off event for Transition Sarasota’s Eat Local Week, with two counties backing, four restaurant booths vending, Mayor Willie Shaw coming to say a Welcome, a steel-drum band playing blues and rock n roll, 100 programs printed in expectation and 12 competitors in a collard greens contest.

We had three weeks to make it happen. We needed at least another month. We couldn’t get that so we scrambled and hustled and pushed our ideals to the side. In the end, we reeled in passer-bys with loud talk, good music and smoky smells.

We brought Sarasota to Newtown.

We did it, but we also got lucky. Transition Sarasota underwent a sudden and major leadership shift just weeks before their sixth annual Eat Local Week celebration and was looking for something to come to them.

So when Lou pitched his Big Mama’s festival idea that included a community collard greens competition, it was like delivery – they ate it up.

Without the high title of kickoff event for “Greater Sarasota’s Eat Local Week” and Transition Sarasota’s powerful networking, the festival’s crowd would likely have been half its size.

We took the chance and ran with it. But not without hitting some bumps in the road.

Whole Foods pulled out of the festival just days before the event. They told us there wasn’t enough time to prepare. Lou was especially disappointed by it but, by then, there were enough names on the program to earn us a crowd.

Sarasota’s Blue Rooster Bar and Grill jumped in not long after Whole Foods and offered their head chef as a decisive judge for the contest. With the self-given challenge “to prepare authentic southern fare for the whole family,” Blue Rooster was just the joint we were looking for.

Bridging the gap between Newtown, a predominately African American community, and “larger Sarasota” was a successful initiative of Big Mama’s, easily proven by the event’s diverse attendance. The demographics revealed another success.

The core purpose of Big Mama’s was to bring Newtown together in the heart of the neighborhood to participate in something designed for the community, by the community – a catchphrase that has become Newtown Nation’s philosophy.

Transition Sarasota reached out to an audience through ads in Herald-Tribune’s Ticket Sarasota and spreading the word through the organization’s social circles.

Lou had a very different method of advertising. Fliers for the event were put up at the North-Sarasota (Newtown) Library, several businesses off MLK and applications for the collards greens contest were sent out to every church in the area.

Hands down, the festival was designed for the Newtown community, a black community. One example of this is Lou’s request that the restaurant booths prepare collard greens a certain style to represent different ethnicities in the community.

Whole Food’s had agreed to serve collard greens cooked with a cajun-style. Cajun fell through but there was still Caribbean, Southern and Creole.

At the festival, Newtown residents had the pleasure of reacquainting with Opal Bell, the owner of former Newtown restaurant Pride of Jamaica. Her booth served out a collard greens casserole prepared Jamaican-style (how else?).

The three other restaurant booths vending their speciality greens – in addition to chef’s choice of sides and desserts – were G’s Southern Kitchen and D & R Barbecue with Southern style, and Ray’s Vegan Soul with Creole-style.

G’s showed up with an innovative collard greens egg roll (southern with an asian twist?) and peach cobbler for dessert. D & R dished out ribs, pork and chicken grilled on sight in the slow-smoker behind co-owners Dale and Rosalind Hill.

Ray’s Vegan Soul from St. Pete served up greens along with Bourbon Chickpeas, vegan mac and cheese and Basmati rice. Ray’s provided an option for several New College students with vegan diets who made it out to the festival.

Newtown is often perceived as separate from Sarasota. A blurb about Newtown found at sarasotagov.com calls out industrial land use surrounding the neighborhood for “isolating it from the larger community.”

The fact that elders in the Newtown community can recall a segregated Sarasota with clarity inevitably has something to do with the disconnect as well.

In his welcome speech, Mayor Shaw emphasized the importance of community events and, speaking to the festival, said “we need to do this way more often” and thanked everyone “for making this the best day of the week in Newtown and for this doing this thing the right way, with everybody in here.”

Newtown Nation can always use an extra pair of hands. To get involved, email Lou Murray at newmurray7@gmail.com