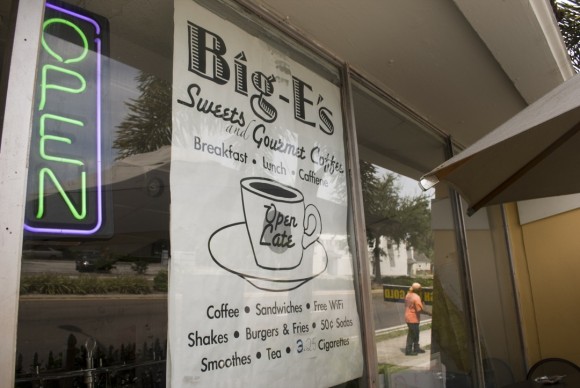 All photos courtesy of Graham Clack/Catalyst

“Pancake cookies,” Eric Hamilton said as he pulled a tray of puffy morsels from the small oven on one of his coffee shop’s overcrowded shelves. “Butterscotch ones. And then I’m making homemade little breads that we use for burgers.”

Big E’s didn’t start as a bakery. “When we first opened, it was just coffee — don’t do anything else,” Hamilton said. “Then, I always wanted to do sandwiches. And I’d always loved baking, so I started doing some baking too.”

More than the menu has changed since he opened the coffee shop six and a half years ago. Since then Big E’s has been established as a landmark in the community: a meeting hall for groups, an open public space and a student art gallery — not to mention the cheapest place in town for a cup of coffee, a veggie burger and a pack of cigarettes. “It’s a center of activity,” one regular described. “People adopt this place.” That’s why any threat to the store threatens the stability of an entire community.

And that’s why an uncharacteristic tenseness pervaded the coffee shop when a SunTrust bank representative walked in about an hour after the cookies had finished cooling. While Big E’s beacon-like smile didn’t betray a hint of anxiety, Hamilton knew that the visit was more than a personal call.

“Off and on, I fall behind on my taxes,” he said. “So they froze my accounts, not too long ago. And I’ve entered into an agreement with them so that I’ll pay it off.” 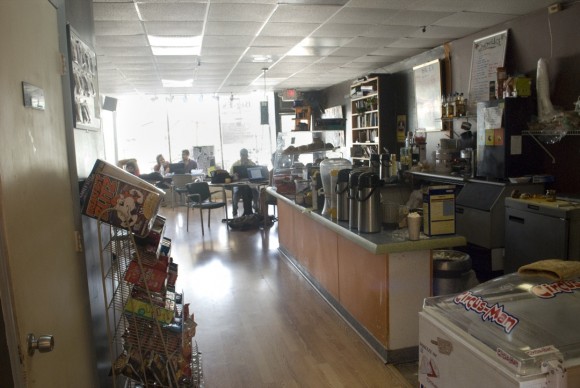 Many patrons cite familiar associations with the places as one of the reasons they keep coming back.

No one is more aware than Hamilton just what the end of Big E’s would mean. “If it closed down,” he said, “I would probably go back to the corporate world and make money again,” referring to his previous career, writing tax code for the defunct accounting firm Arthur Anderson. “But, it would never be exactly the same.”

How Hamilton went from cubicle dwelling to coffee grinding explains a lot about the way he runs his business today. He lost his job in the middle of one of the biggest economic scandals of the decade: “When Enron happened,” he said, “I got six months news before I got laid off.” Then, he says, he took the opportunity to recommit himself to a life of helping others.

“I was brought up to take care of the community, take care of other people above yourself, because if you’re doing that then it all works out for you,” Summarizing the official stance of his business, he continued: “We believe in community, and community means helping people that can’t help themselves at the present moment.”

Hamilton doesn’t mean this as a glib aside about the value of altrusism — it’s his business plan. “We’ve never really made a profit. I haven’t made minimum wage since I started working here.”

He estimates his average wage to be around four dollars an hour. “I’m not starving,” he said with a pat on his tie-die covered belly, “but I have not made minimum wage since I opened the store.” 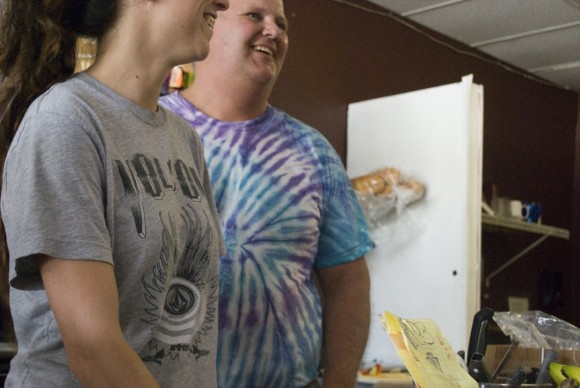 It’s rare to see a customer at Big E’s get served without a greeting from owner Eric Hamilton, Christine Dormoy, or one of the other employees at the coffee shop.

“When I first started off I had a little bit more money from my other job, so we had a full tab system for everybody. Basically, homeless people would come here and eat for weeks upon weeks and never pay, and it got to being to the point where I couldn’t afford it anymore,” he said. “We still provide coffee for anybody that pretty much wants it, but we can’t quite do much more expensive things.”

The strategy has earned Big E’s an unusual following. New College alum (’08) Christene Dormoy, who has worked at Big E’s for two and a half years, described one patron’s reaction to a recent 50 cent price increase on some items: “One of our customers was actually like, ‘Finally, you raised the prices!’ Like they were happy about it.” Hamilton identified a regular, Ed, who was largely responsible for the change.

“Someone needs to make sure you make money Eric,” came Ed’s retort from behind the screen of his laptop. “You won’t do it yourself!”

“We keep the price low cause a lot of people would way rather pay for things than get given it,” Hamilton explained. “Homeless people or whatever, when they have something they can actually buy — like right now we have corn dogs, 50 cents … It’s different than going to the Salvation Army.”

It’s a business plan he’s not about to change. For Hamilton, this is only the most recent turn in his troubled history with the Florida Revenue Department. “The first time it happened,” he said of his tax trouble, “I had a really nice car — I got rid of that, sold it, paid my taxes with it, got a junky car. Then after that, the next time I re-mortgaged my house to pay for the back taxes. And then this year, it looks like I should be, if I keep busy, I should be able to pay ’em all off with just business.”

“We all go though cycles where we can’t do it,” Hamilton said. “You can’t do it on your own. And it tends to be that if you can’t do it, and people know about it, they’ll help ya. And if you keep a positive attitude and go through it, then the community works out.”