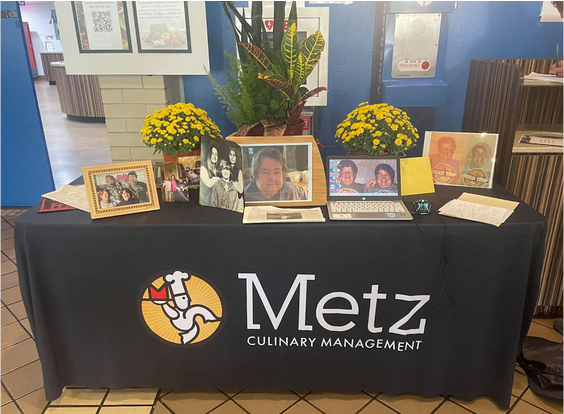 Laura Testa, a beloved member of the Metz staff, passed away late August at 71 years of age. A memorial service held for her on Sept. 14 in the Hamilton “Ham” Center proved that her legacy will be remembered as a tough-loving, passionate woman who deeply cared for her animals, wife and the children she took under her wing. Much is to be said about Testa—her impact did not stop at her fellow Metz employees or her family, but it extended to the wider community here at New College.

“Sometimes she could be a little aggressive, I think she did it for the better of the students,” third-year Q Voccia said. “She really cared about us. She taught me a lot of lessons and always provided a lot of insight.”

On Sept. 12, Voccia organized an origami event in honor of Testa—who loved the hobby—where students and friends of Testa could gather, create paper lilies and tell their favorite stories about her time at New College.

“I would wear this Beatles shirt a lot and she would say that they were one of her favorite bands,” third-year Lola Swanson recounted as they folded their origami flower. “I appreciate the effort to make a connection with someone and treat them like a person.”

Issue 5 of the Catalyst in Fall 2016 highlighted Testa in an article titled “Ten Questions with Metz employee Laura Testa,” detailing major and minor happenings in her life.

“I love the kids. I have so much fun with the kids,” Testa said in an excerpt of the article as part of her response to what her favorite part about working with Metz is.“I get to talk to almost everybody, every day. Nobody else can do that here.”

Most, if not all, students can recognize Testa and her unrelenting willingness to help students and coworkers.

“She was one of a kind, she was strict but warm and kind,” Metz employee and Testa’s friend of Mindy Graswald shared. “She’d help students out if your plan didn’t work she would figure out a way so you could eat something here.”

“She was one of the first members of my New College family,” Caroline Link (‘22) reminisced. “Whenever I would talk to my parents on the phone, it was her and Kevin. I would say, ‘It’s okay! I have people that know who I am and care about me.’ The biggest Mom energy that I had at New College all came from Laura.”

“She would bring biscuits for my service dog,” third-year Dakota Cohen detailed. “That made an impact on the both of us, because Dover’s friends are my friends. It might not be a whole lot but it means a lot to me.”

Testa was a positive influence in many lives around her, including those who she fostered with her partner.

“She just took so many kids under her wing, she made a difference on so many levels,” Monica Zammett said, one of the kids Testa brought into her home, resulting in a 45 year long friendship. “She once told me all that mattered was to make a positive difference in someone’s life.”

“The best thing you can take away from Laura is that she touched a lot of people’s lives, she always made everybody feel better,” Diana Murphy said, another child Testa took care of 41 years ago. “She was always there to lend an ear even though she couldn’t hear!”

“Being sixteen, seventeen years old we did a lot of stupid things and she wasn’t judgemental,” Zammett recalled. “She just listened and said, ‘Well how about this?’ She was always there for us.”

There is so much to learn and appreciate about Laura Testa. Many described her as a tough-love type of lady, never holding back yet doing her best to feed, protect and love her friends and family.

“To know her would be to love her, that’s it,” Murphy declared.

“She loved her baseball,” Moore beamed. “She loved politics and she stood up for what was right for the smaller person. The person that didn’t have food on their table or the person that is homeless. For women’s rights as well, she felt strongly about those areas.”

Testa was known to be a hard worker, moving all around the United States to pursue new ventures, and was never shy to try something new. The lives she touched and the impact she made in the communities she was a part of and cared so much for speak volumes about the legacy she left behind. There is so much to learn about her life that this article could not do justice, but it is an honor to have been able to recognize her influence and share it with others.