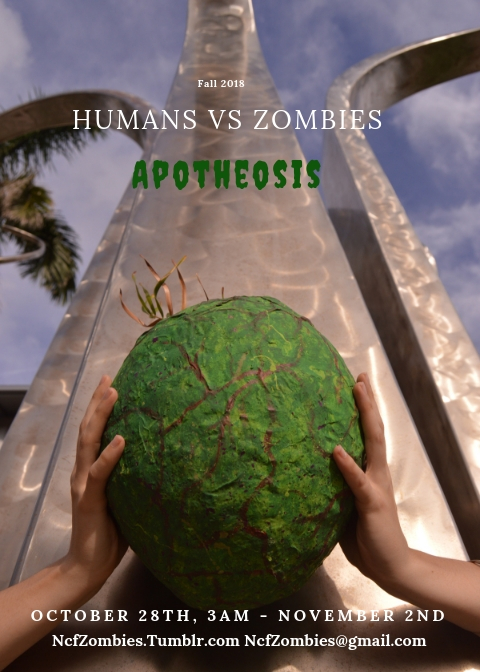 “The End is Nigh” read a banner hanging over a Pei dorm balcony, signaling the onset of the annual Apocalypse at New College: “Zombies 2018: Apotheosis.” The weeklong event is an intense game of tag between humans, wearing red wristbands, and zombies, wearing green wristbands. Humans must arrive safely at each checkpoint to stay alive, while zombies pursue and bite (tag) humans to spread the infection.

On Oct. 28, the madness officially began. A complex story and set of rules regarding feats and weapons were available online for new players. Each day, progress updates were communicated online as humans fought for their survival and zombies wreaked chaos across campus. Observers of the Apocalypse stayed back while humans frantically rushed to safe zones and defended themselves with squirt guns against zombies hoping to gain points.

Eileen Calub: Why did you choose to be Game Masters?

Grace Hamilton and Bef Wilson: “In general, we have a deep love for the game and the friendships it has brought us, so we’d love to see it continue and for younger students to experience that too. I [Wilson] have personally met many students and alums by playing and their friendship and advice is invaluable.”

EC: How did you cooperate with and get permission from administration for the game?

GH and BW: “I’m pretty sure the game is around its 11th year now, so it has become something of a mainstay for administration. They seem to expect it and some have even read the rules on our Tumblr page out of curiosity. We put in event requests where necessary and let Campus Police and [Director of Student Activities and Campus Engagement] Tara [Centeno] know where we’ll be just so there’s no confusion. We also update RHDs [Residence Hall Directors] to any rule changes and current safe zones at the start of the game. In general, the school has been pretty supportive in my experience.”

EC: Are there any important changes for Zombies in 2018?

GH and BW: “We’ve updated some things, such as accommodations and safe zones, but the rules are largely the same. We did clean up the Tumblr some to make it more accessible. The locations of events, like feats and checkpoints, are always a mystery, so they tend to change on a yearly basis. Some common locations include the ball field, Rural America, Old Caples and College Hall dock, but there’s many more.”

EC: What concerns do you have about the game?

GH and BW: “Sometimes players can take the game a little too seriously, but most are just in it for fun. Besides that we just want to make sure that people stay safe and that the game is as accessible as possible, as it can be physically demanding.”

EC: What are you excited to see this year?

GH and BW: “We had a good first-year turnout, and a lot of returning and completely new players were very excited to play. We love to see people having fun with Zombies, because that’s really what it’s all about. We’ve also seen a few clever plays; one solo human walked real casual-like past a group [of] seven or so zombies without detection simply by not making eye contact or holding a spray bottle. On the zombie side, we saw someone make a clean tag by hiding beneath a bench, they just waited it out until a group of humans passed by.”

EC: What do you love most about Zombies?

GH and BW: “Personally, I [Wilson] love the mental challenge. As a player, I loved finding good hiding spots and planning large-scale maneuvers with the Zombie Hoard. As a GM, the game becomes something more like a strategy game, you have to plan and maneuver information to keep the humans challenged, and make the zombies work for tags. You have to work hard to maintain balance in the game, and usually the original plan gets altered a lot because something unexpected occurs.”

As Zombies 2018 began, thesis student and Computer Science Area of Concentration (AOC) Maxwell Miller decided to take his chance to investigate the chaos. For his Geographic Information Systems (GIS) class project, Miller collected data from NCF Zombies players to create a map studying where humans are tagged during Zombies. Miller recorded the places and times where human players were “transformed” into zombies and analyzed the data to determine which places on campus were more dangerous than others.

“This will be my fourth year participating in NCF Zombies,” Miller said. “Every year students take it very seriously and humans try as hard as they can to survive. I decided on this for my project because I think that GIS could be a good tool to help determine what areas on campus are more dangerous than others.” After Miller evaluates the data, Zombies players may find his research results useful for coming years.