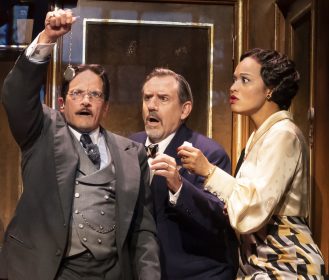 The Asolo Repertory Theater’s recent production of the iconic Agatha Christie mystery novel “Murder on the Orient Express” recieved an outstanding critical response, with one critic from Broadway World calling it “Glamourous. Enthralling from beginning to end.” The set features a true-to-life replica of the Orient Express that rotates, resulting from the hard work of the Asolo’s production team. The show opened on Jan. 8 and the Asolo has since added showtimes to extend the show into mid March to accomodate for the influx of ticket sales.

“Just after midnight, the exotic Orient Express is hurtling down the tracks – to a murder!” the Asolo’s official website states. “An American tycoon lies dead in his compartment, his door locked from the inside. With a train full of suspects and an alibi for each one, it’s the perfect mystery for the dapper detective Hercule Poirot, n’est-ce pas?”

The set of the production is made up of cool colors and bright lights, matching the exact tone expected of a murder mystery. Productions and Operations Director of the Asolo Vic Meyrich spoke of the complicated production process of such a performance.

“Theater is collaborative,” Meyrich said. “At the Asolo, Michael Donald Edwards is the Producing Artistic Director. Michael will, in concert with other people, pick a season and we’ll just take one play from the season. He’ll then create an artistic team, starting with the director, and then in consultation with the director, they’ll pick the teams that design the show and that [consists of] sets, props, costumes, lighting and sound projection.”

Every production the Asolo puts on goes through multiple reviews in the planning process in order to ensure that the design elements will be successful.

“Each one of the crafts that I just mentioned does a technical drawing,” Meyrich said. “We’ll take a look at what they’ve done—we call those preliminary drawings—and we review them for budget and practicality. A lot of times people draw things that, in this universe, can’t exist, because two things can’t be in the same place at the same time.”

Once Meyrich’s team sends back practical edits to the production’s artistic team for final revisions. Those final revisions mark the beginning of the production. From there, the show is built at the Asolo Rep Robert and Beverly Koski Production Center, which is about four miles north of the theater on Tamiami Trail. Plans are in the works to create a bigger production site that is closer to the Asolo.

“When we build a new production center, costumes and costume storage will be over there, which means that if an actor has a few minutes out of rehearsal, they can go and have a fitting and come back. Right now they drive across town.”

Currently 77 years old, Meyrich has been in the theatrical production industry as a professional for 51 years. Before that, he took part in school productions behind the scenes.

“I was the kid in elementary school that did all the audio-visual and theater work,” Meyrich said. “I woke up one day and said, ‘You know, I’m doing the same thing that I did seventh grade.’ It never changed.”

Meyrich is not alone in this. Many of the production crew members have been in the industry for decades.

“It’s a very unusual group of people here,” Meyrich said. “Many of the people out in the shop have been here [for a while] and there’s another guy who was a junior in Sarasota high in 1969 who’s still working here.”

The Asolo’s production of Murder on the Orient Express was one of the more complicated productions that the theater has endeavored to put on.

“The difficulty with Murder on the Orient Express was we have basically three railroad cars that are in the show,” Meyrich explained. “So the challenge was how first to make the railroad cars appear. Do they shuttle back and forth? Do they spin? That and how to make it all fit in a theater with two other shows [was the most difficult part]. It was probably one of the longest and hardest productions that took the most drawings and had the most failures to work out that I think we’ve been involved in for a long time.”

Associate Production Manager Mike Rogers spoke of the notoriety of the Christie original and the infamous Orient Express.

“I think there was [a bit of pressure because the story is so notorious],” Rodgers said. “A lot of that fell on the paint department to try and recreate [the Orient Express with historical accuracy].”

“For instance, we took the symbols of the actual train, the lettering style, the crest that’s on the train,” Meyrich added.

The work seems to have paid off with the vast success of the production. Tickets are selling fast, so those who would like to see the play should contact the box office at the Asolo.

Information for this article was gathered from asolorep.org. For more information, go to the Asolo’s website or call the box office at (800) 361-8388.