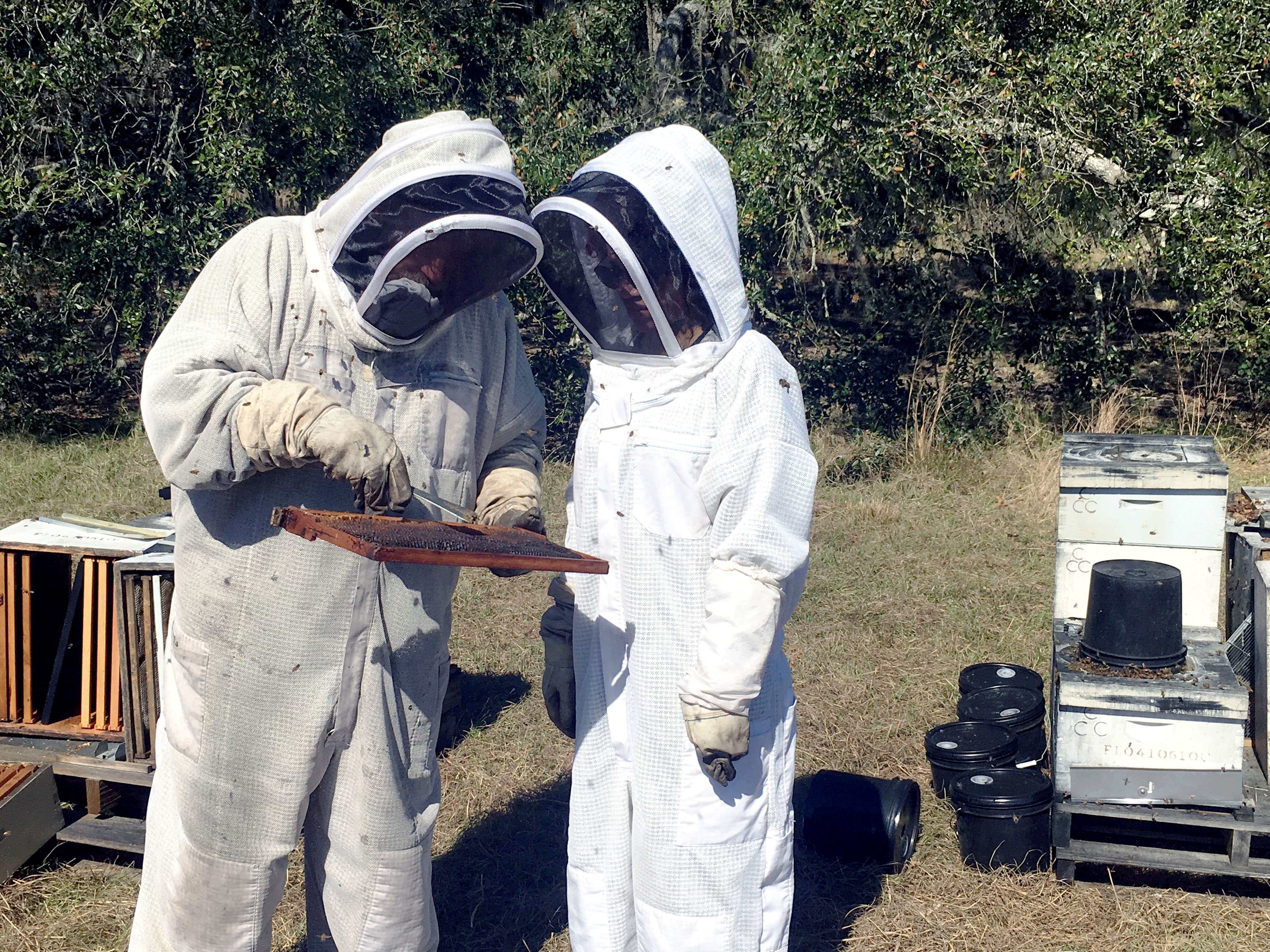 Shaded by the trees and hanging Spanish moss, I drove down a dirt road to meet Jim Cutway of Myakka’s Gold Apiary. Cutway is a beekeeper with a biker-like black and gray beard and ponytail combo and a welcoming smile. He specializes in raw honey, which is believed to hold enzymes, help with allergies and serve as an antiviral and antibacterial. Cutway sells his honey at local markets in the Manasota area. He takes the bees seriously, so I was grateful that he allowed me to tag along. I arrived at a field parallel to a citrus grove. We began the process by putting on the bee suits. The suits were flexible but thick white onesies. They featured screened masks and many zippers. Since I don’t normally beekeep, I wore my black, leather Doc Martens, and they actually worked quite well. Besides, there is something punk about immersing yourself in a beehive.

Cutway carried a smoker with a hand pump.

“The smoke simulates a wildfire,” Cutway said. “It causes the bees to eat more.”

The bees gorge themselves when exposed to the smoke, they then become tired and less agitated.

I noticed that every hive behaved slightly differently. Some hives were less concerned with us than others.

“That has to do with the personality of the hive,” Cutway said. “They are all girls.”

Actually, I learned that about 95% of the hive is female, while the rest are male drones.

In the hive where they where they were growing a new queen, the bees darted about wildly.

“We keep our bees in Myakka and near the Manatee and Braden rivers,” Cutway said.

Cutway’s honey holds the flavor of the area the bees collect pollen in.

Honey is not the only product that come from the hives.

“We also have lip balm, facial scrubs, candles and beeswax. All containing our honey or wax,” Cutway said.

The honey is available at the following locations, Scuba Quest in Bradenton and Sarasota, The Barefoot Market in Myakka City, Manatee Family Pharmacy in Bradenton, Paul and Frankies restaurant in Bradenton, and a new place Mermaid Pies and Produce on Cortez.

“I personally bring it to the Central Sarasota farmers market along with a few other venues that we post on Facebook.”

Cutway showed us four hives. We saw the different stages of production and reproduction. 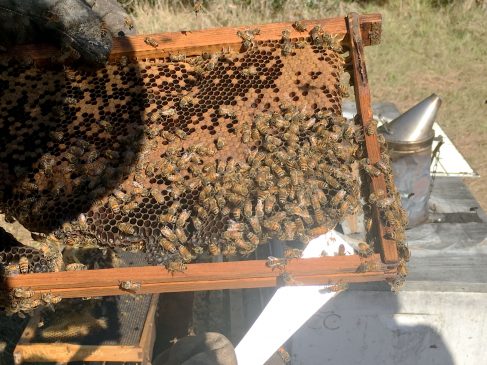 Usually, bees are born and they spend four weeks working in the hive, on maintenance and more, and then they spend four weeks collecting pollen outside, which they collect in their pollen sacs. Bees live longer when nectar is not as readily available, so they can live up to four months in the winter.

“They will literally work themselves to death,” Cutway said.

Queen Bees are bigger than the rest – since they were raised on a diet of royal jelly – and they can live much longer. Their main job is to reproduce.

“It’s documented that there was one queen who lived to be 17 years old,” Cutway said.

We saw how the Bees would build their hives, clean them and eventually cap honey in the cells.

Cutway is attentive to his bees. He said he often spends whole nights moving them. Still, he admitted that without him the bees would carry on just fine.

“Mother nature is pretty good about that stuff,” Cutway said.

The cells were also used for reproduction and the bees would lay eggs in them. We even saw a bee beginning the process of hatching.

At one point, I became so engrossed in the bees that I pressed my face to the mask and got stung.

I spent two days with an asymmetrically swollen face, but the experience was well worth it.