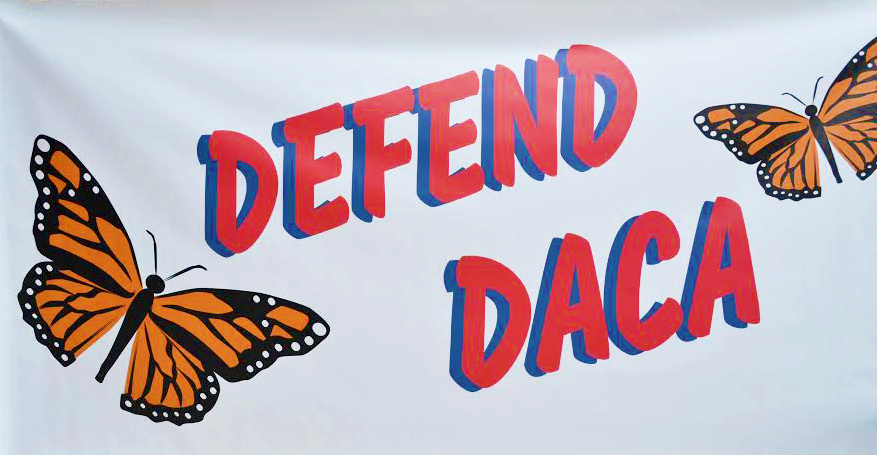 The banner was revealed within hours of the announcement that President Trump intended to phase out DACA over the next six months. (Photo courtesy of Michala Head)

Within hours of the announcement that the Deferred Action for Childhood Arrivals would be phased out over the next six months,, a group consisting of both New College students and Sarasota-Manatee residents assembled outside of New College’s ACE building to reveal a banner reading “DEFEND DACA”.

The announcement was made on Tuesday, Sept 5t, at 11 a.m. from President Donald Trump through his Attorney General, Jefferson Sessions. Sessions said that the enactment of a replacement policy would be left in the hands of the legislative branch. It was first enacted during the Obama administration in order to protect undocumented immigrants under the age of 31.

The act only protects those who immigrated to the United States prior to their 16th birthday, those who study, or have studied, here, and those who have served in the Coast Guard or military. DACA recipients have to meet certain standards every two years in order to continue to be eligible. In sum, childhood arrivals to the U.S., who know it as their home, now face losing everything, and it is in the hands of their community to stand up for their rights.

Following the banner’s reveal, the group held a community healing circle to discuss recent events and the impact of this decision. The creation and revealing of the banner was put together within hours of the announcement, in order to demonstrate that people are united in actively resisting the Trump administration’s attack on the policy. Community organizers present at the gathering stressed that DACA was initially fought for by undocumented immigrants, who put their personal safety on the line in order to secure protection for their children. The point made clear that resilience and hope hold strong in the ongoing fight for basic human rights.

The gathering outside of ACE was intended to address the uncertainty that many are facing due to DACA being brought to an end. The banner reveal and community healing was a swift show of support, where those in attendance who were directly impacted by this news were given the space to put their feelings out into the open, and to see the support of their community. The event could also be considered an opportunity for those outside of DACA’s impact to listen to the voices of those affected, realize their role as community members, and hear how they can be of help.

In the wake of the event, action is being taken in defense of DACA recipients, and the immigrant community that is going to be impacted by its repeal. A group of Los Angeles and New York City based “undocumented/dacamented” community organizers set up a YouCaring page in order to raise money for over 50 DACA renewals. The page had a goal of $35,000, and was able to raise $57,472 within about a day before needing to close at 11 a.m. on Sept. 7 in order to process donations to recipients. Although this page is no longer accepting donations, they have linked smaller, more localized pages that people can still give to if looking to donate.

Larger scale protests in defense of DACA recipients have also been reported in several cities such as Denver, Los Angeles and Washington D.C.. In spite of the growing concern this week over Hurricane Irma’s impact upon South Florida, a rally was held in Bradenton on Wednesday, Sept. 6 to protest its dismantlement. The local protest events established that the organization of phone banks — on campus and in the community — has commenced in order to make clear to representatives that people stand with the immigrant community, and will continually stand up for DACA.

Uncertainty and fear has arisen from the announcement that DACA will no longer be in effect in six months, and there is currently no replacement plan in place. The ramifications of revoking DACA, such as job and insurance loss, will be severe for thousands of families and communities if Congress does not manage to agree upon a viable replacement.