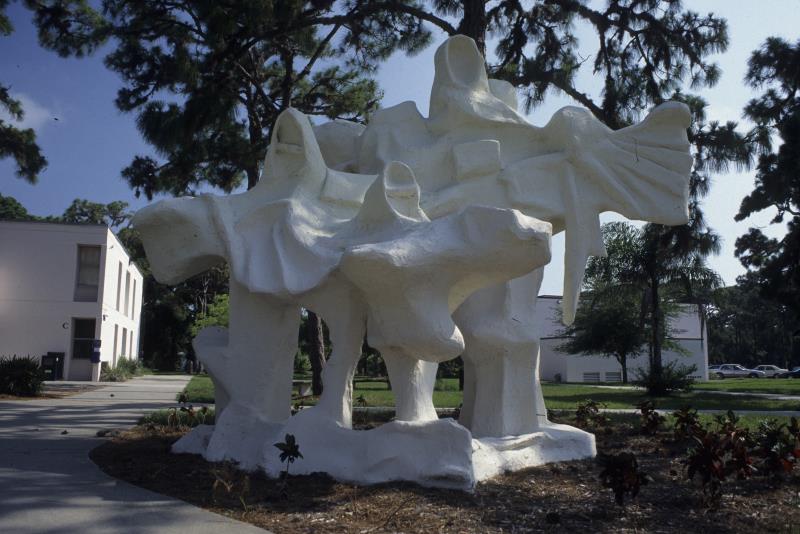 The Band of Angels sculpture standing in the center of New College’s Palmer complex has finally received its well-needed refurbishment. The sculpture, also known affectionately as “Big Mother,” was completed in 1973 by students and late Professor of Art Jack Cartlidge, who taught at New College from 1968 to 1998. Cartlidge was one of the founders of the Art department at New College and is known for his copper sculptures across the Sarasota area, including Nobody’s Listening, Earth Mother and Guardian located at Sarasota’s City Hall, and Titan’s I on the bayfront across from Selby Gardens.

After years of exposure to natural elements, the 15-foot-tall steel and mortar statue had a noticeable amount of deterioration that created a sense of neglect among alumni and current students.

Former Professor of Mathematics David Mullins (‘81), who taught at New College from 1991 to 2015, played a crucial role in the restoration of the sculpture.

“I have been concerned about the lack of appreciation and devotion of resources to art on campus,” Mullins said in an email interview. “In January 2017, I noticed the sculpture was in bad repair and worried about it deteriorating beyond the point of repair.”

Art restoration expert Scott Moore was contracted by the school to restore the sculpture and spent the month of January working to clean, grind and patch problem areas in the work.

“New College prides itself as a school that makes powerful, positive changes in students’ lives,” Mullins said. “But it is not the school that does this–it is largely the faculty. Jack Cartlidge was one such professor, who had a profound influence on so many students. Further, this joint student-professor work of Jack’s is the only significant piece of Jack’s on campus. Jack is a world-renowned sculptor, and has works throughout Sarasota–the school should preserve and celebrate his work. Also, the school suffers from lack of public art, in my opinion. We need more, not less.”

Frazier Carraway (‘72) recalls working on the project with Jack Cartlidge in 1972.

“I remember working on the foundation and seeing rebar sticking up out of concrete pads,” Carraway said in an email interview. “We all bought end cutters and spools of tie wire. I learned how to install lath working on the Big Mother. [Working on the project] was a great opportunity to learn a material for creating a large sculpture that was relatively inexpensive and we enjoyed working with Jack.”

Knowing the sculpture’s restoration is complete, Carraway reflected on how “public art enriches us all. I think the Band of Angels also ties the college to its early days.”

As for others, the future of the sculpture is still an uncertain one.

“I am still concerned about the long-range plans for the sculpture,” Mullins said. “[Moore] did say it would be easy to move the piece, which may be necessary if the multipurpose building is funded and ends up in the Palmer space. If so, where it is moved is an important question. I don’t want it to end up like the Boat Fish sculpture which suddenly ended up moved from in front of the Academic Center (ACE) (as part of ACE’s art funds) to behind the retention pond at Caples, without discussion or for any clearly stated reason.” Through the restoration of the Band of Angels, it is apparent that the masterpieces of the school aren’t limited to effortful theses or independent study projects (ISP), but also include the art created by—and belonging to—the campus community.