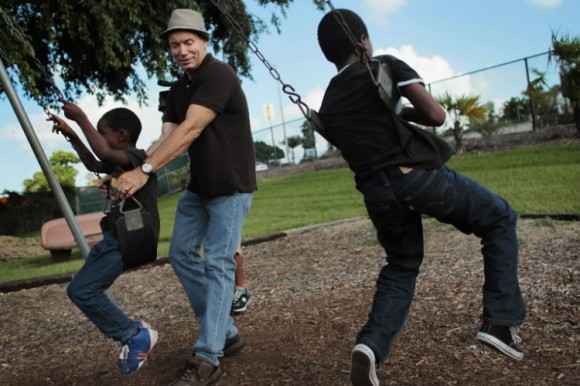 On a sunny day, Gill bonds with his two foster sons at a playground.

On Sept. 22nd, appellate court judges decided that Florida’s ban on gay adoption was unconstitutional, ruling that Frank Martin Gill and his partner have the legal right to adopt their two foster children.

Gill has been a caregiver to his two foster children for the past six years. When the two brothers were first adopted they were suffering from neglect — both had ringworm and the youngest brother had an untreated ear infection. Now, they live in a North Miami neighborhood where they are surrounded by a caring network of friends and family.

The American Civil Liberties Union (ACLU) represented Gill in his case to adopt the two brothers. The ACLU argued that Gill and his partner have proven themselves as doting, mature parents and that if the brothers were separated from them, their young lives could become tragic and disjointed.

The three judges on the Miami-Dade County appeals court ruled that there was, “no rational basis for the ban,” and unanimously approved Gill’s case. To back up their decision, they cited that Florida’s legislation was flawed in allowing gay couples to be foster parents and legal guardians and not allowing them to adopt. The court also disregarded previous scientific evidence that children of same sex couples are prone to more sexual activity and bullying than children of straight couples, accepting newer evidence from the Florida Department of Children and Families that gay and heterosexual couples are equally capable of being good parents, relating this to Gill’s success as parenting.

Florida’s ban on gay adoption has been in effect for 33 years and was created as part of the anti-gay rights movement headed by singer and beauty queen Anita Bryant. Bryant formed an organization called “Save the Children” that was aimed at preventing gay people from recruiting children to homosexuality. This group pressured the state to ban gay adoption and succeeded in doing so — it also led to a referendum repealing an ordinance that banned discrimination on the basis of sexual orientation.

Gill and the ACLU desire to take the case to the Florida Supreme Court to reach a final statewide decision on the law. Governor Charlie Crist has stated his hopes that the state’s Supreme Court will preserve the appeal court’s ruling.

At the moment, Gill is glowing in his recent success. He is excited to get his name listed on his boys’  birth certificates as their father, saying, “I think the birth certificates are going to have a prominent place in our house. That will be written proof of all of this struggle.”

Professor of French Language & Literature and Director of the Gender Studies Program Amy Reid reflected on the ruling, saying, “There has been a lot of bad news over the past few years about the rights of gay people having their families recognized and legitimized so this was good news here in Florida.” When asked what her initial reaction to the court decision was, she said with a grin on her face, “Woo-hoo.” Though this decision is a small step for gay rights, it is a harbinger of hope for future advancements and a cause for celebration for gay rights advocates.

Crist summed up the true significance of the ruling and centered it upon who is most affected  by it, saying, “It’s a great day for children. Children deserve a loving home.”

Information for this article was taken from www.huffingtonpost.com, www.nytimes.com and  www.miamiherald.com